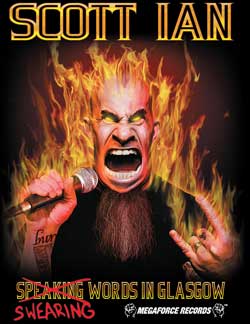 I had the great pleasure of interviewing Scott Ian last week where we discussed, among other subjects, his new dvd “Speaking Words in Glasgow”. As a follow up, I was kindly provided with a copy of the dvd for review. I really wish I had been able to watch it before the interview, as I have a whole list of new questions I would have asked based on the stories I just heard.

I gotta say..Scott looks younger than ever. He’s definately doing something right. This dvd is from his tour in 2013, where he booked 15 dates and instead of playing music, he tells stories. I have been a fan for some time, and I wish I had been able to attend one of these shows in person.

Don’t call this a “spoken word performance”, though. As Scott told me in the interview, the term makes him him think of smoke-filled coffee shops and bad poetry. This is a little different.

Scott entertains us with stories from his years in the music industry – people he’s met, adventures he’s gotten himself into (and out of), crazy moments that are precisely the sort of thing no one ever believes and makes us all yearn for the rock star life.

He opens with a very straightforward reading from the book SCAR TISSUE by Anthony Keidis, a sort of misdirection that the audience mistakes as a story about Scott’s own life. The reaction is priceless. 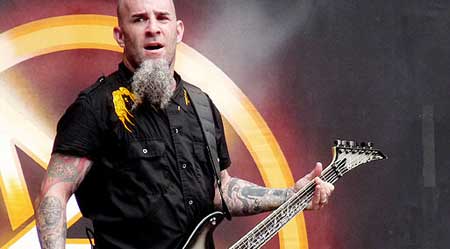 From there, Scott launches into his actual material. Starting back in the fall of 1985, as Anthrax was recording their first major studio album, Scott illustrates his lecture with images, video, and illustrations. The stories flow seamlessly into each other, weaving a cohesive narrative of the early days of Anthrax.

Visually, the camera work and lighting could be better. it kind of looks like a TED Talk. Granted, the coolest mother f*cking TED Talk EVER. Actually, more like a motivational speaker at a high school assembly. There is a Q & A at the end, and even a RAFFLE. Not even kidding…Jackson Guitars donated guitars to be raffled off at the end of the tour and Scott draws the winning numbers himself. The winner at each show got a merch package and was then entered in the guitar drawing which was drawn at the last show on the tour. 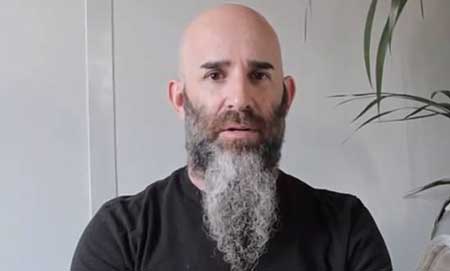 It’s so personal and intimate, and Scott really connects with the audience. The casual, informal setting and videography adds to the intimacy of the show. and anyway, this dvd isn’t about the stage set or how awesome the videography is. It’s about the content being presented. Scott is engaging, and entertaining in the way he relates his adventures. Funny, self-deprecating, sometimes a bit sad and wistful, Scott walks us through his career and adventures. Scott uses profanity like an art form, by the way, dropping swear words like a Dj dropping the bass : as punctuation for his points.

I really don’t want to ruin the fun by talking too much about exactly what he talks about, but I will use the list format to share a few highlights:

A beautiful and drawn out tale about Dimebag Darrell, relating a prank war that took three years to come to its conclusion

Scott talks about drinking, and drugs, and felony arrests. Not always his, mind you. Scott has either worked with, toured with, or partied/hung out with just about every body that matters in the heavy metal music scene, and he has no shortage of amazing and hilarious road stories about all of them. He even takes one for team in the very first tale he tells. A story that, if it had happened to me, I sure as hell wouldn’t have told a damn soul, much less in front of an AUDIENCE and RECORDED FOR POSTERITY. 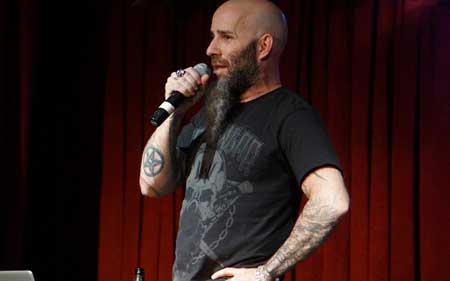 Personally, I love road stories. My mother was working musician for the majority of her life and I never tired of the misadventures she would relate to me about touring. So this dvd really makes me happy. Scott is funny and poignant at the same time, especially as he talks about Dimebag and Jeff Hanneman from Slayer, the latter’s death coming only a few weeks before this particular show was recorded.

If you are a fan of Anthrax, or of Scott Ian, or just the kind of person that loves this sort of biographical story telling, this is a really great dvd. My self, I loved it and can’t wait to purchase a copy for my library.

On a scale of one to ten, ten being awesome, I give this dvd 9 guitar strings.