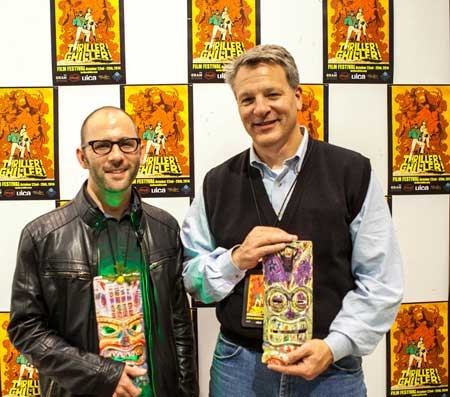 All submissions to Thriller! Chiller! Film Festival were pre-screened at least three times by as many as nine different filmmaking professionals and were rated based primarily on their excellence in storytelling as well as technical craftsmanship. After the submission phase has completed, top rated screeners are suggested for entry into the festival and are programmed according to the festival directors’ discretion calculating available screening time and popular thematic interest for our audience’s full enjoyment. Accepted films are then further differentiated by their initial rating, nominated and forwarded to a jury of independent critical and community professionals for award consideration.

Thriller! Chiller! Groovy Awards are presented in the following categories: Best Feature, Best Short, Best Thrill!, Best Chill! & Best FX. The instruction to our jury is to examine a movie’s content as a whole and attempt to quantify its visceral impact as a story and how it best represents its particular genre rather than comparing genres with their fellow nominees. For instance, an action movie is evaluated within the action movie genre rather than comparing an action movie to a horror movie to a sci-fi movie, etc., etc.

And the nominees are:

And the winners are:

Best Chill: “He Took His Skin Off For Me.” UK. Director: Ben Aston

The Boomstick! Award!: “Moths” Grand Rapids, Michigan.
Director: Andy Fortenbacher
The Boomstick! Award! has quickly become Michigan’s most unique and sought after accolade on the regional film festival circuit. This sweet baby could only be presented by Thriller! Chiller! in Grand Rapids and is awarded to the Best Michigan Movie! This award takes into account a great many factors including the fortitude necessary to create the movie despite the challenges which should have prevented it from being made in the first place.

The Storey Award : Stuart Poltrock, Sound Post Recording Studios
The Storey Award is a community award created by Thriller! Chiller! and is presented in honor of journalist, friend, and community activist Drew Storey who passed away unexpectedly in 2009. The recipient is awarded based upon their body of work, their selfless contribution and its impact on building community relationships, which promote and connect Michigan’s artists to a larger audience around the world.

About Thriller! Chiller!
Thriller! Chiller! is owned and operated by festival directors Chris Randall of Fulvew Productions and Anthony Griffin of UnSAFE Film Office. Marketing and Public Relations are powered by Shirley Clemens at Twain Girl.