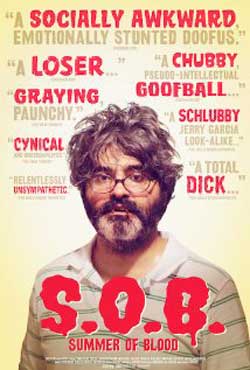 Lousy lover and egocentric Eric Sparrow is dumped by his girlfriend after rejecting her marital proposal. After a few failed dates his luck turns when a chance encounter with a vampire turns him into a sex god.

Ask the average person on the street what an atypical vampire is and they’ll probably go through the usual criteria: Suave; amoral; sexy with a hint of danger and, god help us, they may even say they sparkle. (Yes, I know, Twilight was six years ago. No, I will not get over it) Well, allow Summer of Blood to shatter a few people’s preconceived notions.

Erik, played by Onur Tukel (Richard’s Wedding), is the shallowest of all shallow human beings living in New York. He’s not mean or malicious, but he’s not someone you’d want to get trapped in a lift with; taking to inane monologues like the rest of us take to breathing. He’s a member of generation X, trying to slum it with the millennials. He celebrates his Turkish heritage by using it as an excuse for why he can’t do things, like cooking once in a while for his girlfriend.

Somewhat oversexed, he freely admits that his idea of discipline is managing to not watch P*rn for three weeks. Such is his ineptness that when he’s faced with someone bleeding profusely from the throat at the start of the film, he asks them to use sign language to tell him what kind of assistance they require. This is not a man who deserves the adequate job he’s got, let alone the gift of immortality. However, that gift is indeed given when a chance meeting with a vampire leads to Erik transforming into nosferatu. An exceedingly hairier version anyway! 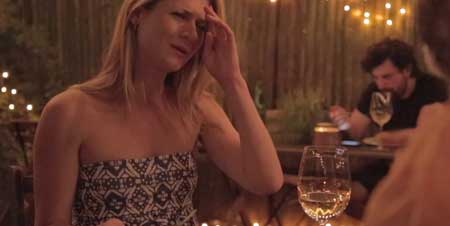 However, Erik is not some lone prattling weed amongst the roses. Summer of Blood’s comedy also comes from the denial of those around him who are equally insular and self-serving. When he turns down his girlfriend’s proposal of marriage, she interrupts the proceeding fight to flirt with an old college friend. Turning up to work covered in blood, Erik’s colleagues meet him with indifference and accusations that he’s missed an important meeting. Like the world of American Psycho, no one can see past their own egos. Literally no one cares.

Tukel is great as Erik, always keeping us at arm’s length and ensuring we never really want to hold Erik close to our bosom. When Erik makes his first kill, any sympathy for a man losing control is flushed down the toilet when he chastises his victim for failing to finish college.

Problems do start to surface towards the end when Erik begins to philosophize about life and the nature of God. It’s a sub plot that doesn’t go anywhere. Which is unfortunate, as it raises its head again in the final moments of the film to bring it to a close. Despite have reached what is clearly a natural ending, with the audience being allowed to take stock of how far Erik has come, he and a newly turned vampire go on to discuss how plausible it is to pray to a non-existent God. It’s a floundering scene that feels like one of Woody Allen’s cut-offs. It’s meandering and a little bit too smart for the film’s own good. In short, it adds nothing except create a desire to take some scissors and do a little snip snip snip to the scene. 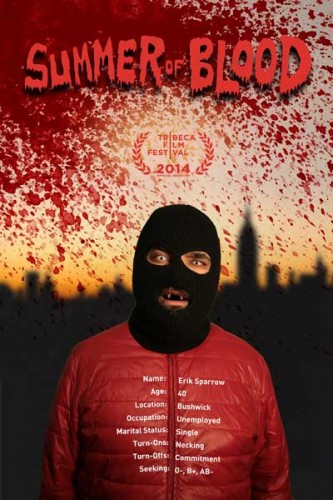 As previously mentioned, Summer of Blood isn’t really a horror. Despite its pointy teeth and spilled blood, it probably shares more in common with Tiny Furniture, Frances Ha and other entries in the mumblecore canon. However, for those wanting an easy going comedy with a splash of red, this is an entertaining enough piece of work. Just watch out for that ending.