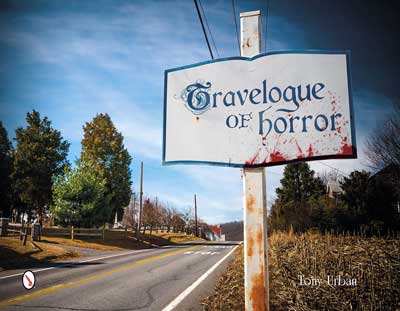 As a fan of the genre, I tend to get really excited when a cool new book release arrives on the scene. I’ve seen my share of “movie catalog” book releases but this release is actually the first publishing I’ve seen that takes the time to map out what most of us would love to have on hand for off road vacations.

Namely the details on discovering old movie locations used in classic horror movies. By classic, I’m referring to many of the films that arrived during “my” lifetime. Films such as “Jaws”,”Friday the 13″, “the Blair Witch Project”, “Evil Dead” and “Creepshow” are a few that come to mind that are featured in this book.

To back up a bit, the book is a masterful creation by author Tony Urban, published by Schiffer Publishing. It’s not a stretch to call this one “the perfect  horror fan coffee table book for what it offers to fans of the genre. The book is titled the “Travelogue of Horror” and is a collection of original movie site locations for some of horror’s greatest cinematic achievements.

As a fan myself, you could say I’m somewhat envious that Tony got to see all these locations in person and receive book deal to showcase them all. What I loved about this book was that after giving readers a thorough explanation about some of the movie scenes and locations….. he even wet as far as to provide “visitor information” complete with addresses for the rest of us to follow up on. Now that’s value right there! Perhaps reason enough to motivate a few of my own road trips.

The book reads as his personal diary of events and road journeys detailing what he investigated based on limited information. As he narrates each location, Tony describes the conditions, the area, and what others should expect if “they” follow on similar path. While it’s less likely that hoards will head out to private land areas to grab shots, it is likely that others might indulge in some of the more grand building locations used as facades and establishing shots. There are quite bit mentioned…….for me, that is as useful as a simple address type into my GPS.

Per Tony….. ” I’m the type of guy who will drive 500 miles to see a creepy cemetery, a horror movie filming location, a UFO crash site or a haunted house and enjoy every mile. I wrote a book about my first 5 years of travels and it will be released in the summer of 2014.”

The book is loaded with attractively color designed pages from front to back. Each location contains a feature pictures of the spots as they look now, however this book could have benefited readers by including quite a bit more. The design in this case overshadows the true attraction to the material in this book…namely, pictures of the horror film locations.

Now when I heard about this release, one magazine instantly came to mind, HorrorHound Magazine. They have been featuring horror location details and photos as a regular column for many years. However I always felt like they missed the boat by not releasing these to a comprehensive collected book format. Well, HH, it looks like Tony Urban beat you to the dock with a real product for fans……… nice job!

I don’t imagine this will turn into a publishing trend, however I would mind knowing more about locations featured in other movies. Maybe a volume 2 will rear its ugly head someday?? In any case, I love this book and the information it b rings to fans. Perhaps tour season just ramped up for some of these locations…..

Looking for that perfect horror fan book gift? Then look no further

The book contains alot of narration which should work fine for readers who want to experience the journey with Tony. It’s coolness in package…simply enough. 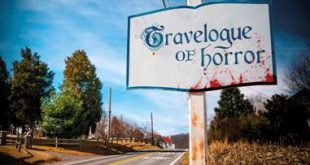