Home | THE SHINING & Masquerade Ball in Jersey City This Weekend

THE SHINING & Masquerade Ball in Jersey City This Weekend 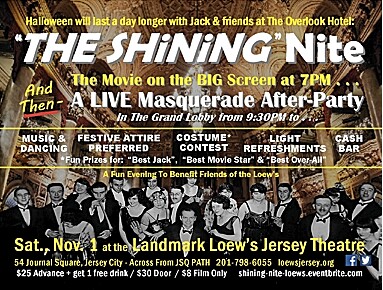 Stanley Kubrick’s 1980 film version of Stephen King’s The Shining will be screened on Saturday, November 1 at Jersey City’s famed Loew’s Jersey Theatre.  The screening will be followed by a masquerade party in the huge theatre lobby.  From the press release:

On November 1 at 7 PM, come to watch the legendarily creepy “The Shining” starring Jack Nicholson on The Loew’s Jersey’s  BIG 50-FOOT-WIDE screen…AND THEN after the movie, starting at 9:30 PM, step out to the Grand Lobby and into an elegantly decadent Masquerade After-Party!  It’ll have a 1920s theme to celebrate the Loew’s 85th Anniversary, and that will also make you feel like you’re back in one certain scene in “The Shining” — a little eerie, maybe, but also a lot of fun!  There’ll be a great mix of music & dancing all night, light refreshments, a cash bar (wine & beer), and a surprise or two.  And because a Masquerade has become a new tradition at the Loew’s, there will be a Costume Contest for fun prizes with categories that include “Best Jack,” “Best Movie Star” and “Best Over-All.”  But if you don’t have a mask, don’t worry–while preferred, they’re not required. You can come as you are to the party!  Don’t miss this unique Halloween happening!  Proceeds will benefit Friends of the Loew’s.