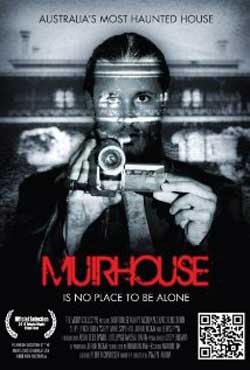 In 2007 author Phillip Muirhouse was left alone in a haunted homestead called ‘Monte Cristo’. He was there making a documentary that was to accompany his latest book. He also broke the rule of all ghost hunters…. Never Be Alone.

To me, the found footage ghost/possession/supernatural film is the lowest common denominator of horror film making. It uses shoddy looking footage (usually night vision), loud sounds, cheap scares and one simple trick to frighten you. What is this trick? Mundanity. That’s right. Mundanity. They will all have a scene of absolute mundane stuff before a scare, boring you into a semi-sleep then have a loud sound bite or “apparition” run behind the character or something similar to scare you. The only reason you get frightened is because you’ve just been scared out of your sleep state. If they did the same thing with a comical horn or have a fluffy bunny run behind the character, you’d still get scared. Don’t get me wrong, there are a few of these films that do it okay, Oculus being one of them, but that’s all that these films do to scare you, and they make an ass-load of cash doing it. It baffles me. Thanks to studios like Blumhouse Productions, this sub-genre has saturated the horror scene with a litany of mundane efforts and only a handful of actually entertaining films. 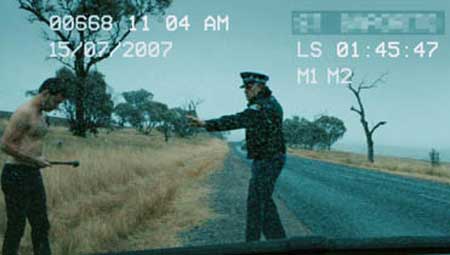 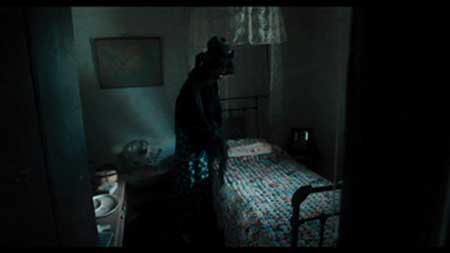 Muirhouse, the maiden effort by writer, director and producer, Tanzeal Rahim, tells the story of Phillip Muirhouse, an Australian author who spends a night in the mysterious Monte Cristo homestead to create a documentary as a supplement to his book. Philip gets more than he bargained for when a ghost (eventually) haunts him. Is this Australia’s answer to Paranormal Activity, or just another attempt at this milked-until-the-teat-only-produces-dust sub-genre?

We begin our journey through an in-car camera of a police cruiser doing its rounds of a typical suburban locale. They eventually stumble upon a dazed, blood smeared Phillip brandishing a hammer and take him into custody after he feebly attempts to attack one of the officers. As far as hooks go, this is as anti-hook as they come. Nothing happens. It literally views as flat as what I just wrote. This left me with a feeling that the worst was yet to come… And I was right.

We are then told that we will now see the footage which led up to this “hook” and are brought up to speed with the whole Monte Cristo/book/doco story-line through a series of documentary style footage and interviews. One particular interview is with a ghost hunter who blatantly reiterates the point that you should NEVER hunt ghosts alone. Did you get that? NEVER HUNT GHOSTS ALONE. It’s that blatant… We are then conveniently told that Phillip Muirhouse will have to spend an hour and a half (or so) alone at Monte Cristo while he waits for his film making buddy to arrive… Didn’t see that one coming… 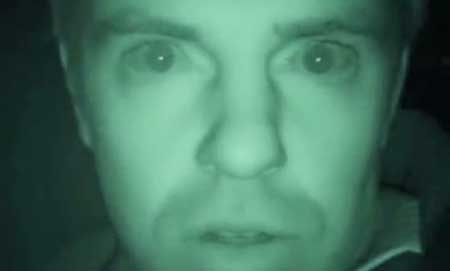 What follows from here is essentially a tour of the Monte Cristo house. Phillip walks from room to room giving some “scary” history on the people who lived there. I could have sworn it was a tourist ad for Monte Cristo, which is a real-life “haunted” homestead (www.montecristo.com.au/).

Very little happens in Muirhouse. It should have been called Much Ado about Nothing as that’s what happens. We don’t get our first paranormal sound bite until FORTY MINUTES into the film. Up until then we are treated to scene after scene of antique furniture and riveting footage of Phillip setting up a tripod and camera. We see our first glimpse of a ghost at about 50 minutes in… This is a 75 minute film… And what does this terrifying specter do after we’ve waited so long to catch a glimpse? It puts two chairs onto a dining table. The horror…

In the final 20 odd minutes of the film, we hear more thuds and stomps, watch Muirhouse run out and back into the house numerous times, minutes on end of no dialog, and then when there is it’s usually of Phillip yelling “Who is that?” or “Who’s there?”, and the power cutting out a few times. It is truly run of the mill fare. It was literally this formula over and over again: Scary sound > Phillip gets scared > lights go out > Phillip runs outside shit scared > Phillip flips the light circuit breaker back on > Phillip enters house again > repeat. There was no imagination or effort put into what should have been the most frightening part of the film. The ending is typical to the sub-genre, and as uneventful as the rest of the film. The good news is that you get to see the specter flash past two more times here. That’s a total of 3 times for the entire film.

Phillip Muirhouse should not have been alone. Another character should have been written in to accompany him. Hell, even a dog would have sufficed, anything to allow him to interact. Because he was on his own for the entire ordeal (my ordeal, not his), there was no conflict, no tension, no real way for Phillip to express his feelings other than heavy breathing and saying “Shit” or “Who’s there?”. People want to see characters interact and react with one another, that’s why Blaire Witch worked, that’s why Paranormal Activity worked, even though I don’t think much of that film. Muirhouse left out this important ingredient, so at times when there was no paranormal activity we are left with Phillip droning mundane information about the house instead of having interaction with another person. When finally there was some ghostly action, we have minutes upon minutes of Phillip breathing frantically, instead of trying to help or find another character, or arguing about staying, or anything other than what we have now. There was potential in this film, but it was never realized in any form.

If I had to say what the best thing about this film was, I’d say the credits. They looked very cool and professionally done. Other than that I can’t recommend this film even to the buffiest of found footage film buffs. This is a poor example of the sub-genre. At most, this should be watched as a guide of how not to make these types of films. I truly wish it was different, considering it’s an Australian effort and a horror, something our country doesn’t usually produce thanks to Screen Australia’s hard-on for dramas and arty-farty fare.

I give this 0 out of 5 night vision cameras.