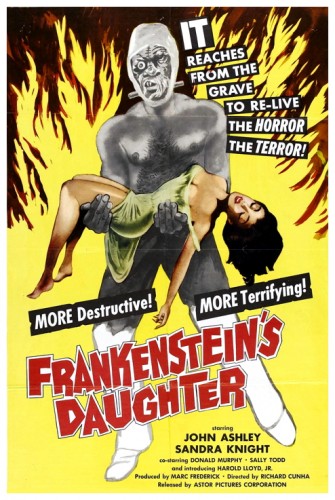 SYNOPSIS:
“The grandson of Victor Frankenstein, Oliver (Donald Murphy), is hiding away as a laboratory assistant for the gentle Professor Morton (Felix Locher). While Doctor Morton pursues a pet project, Doctor Frankenstein secretly works his own experiments on his benefactor’s niece, Trudy Morton (Sandra Knight). Although these experiments temporarily disfigure Trudy’s face and cause her to wander aimlessly at night, they are only a build-up to Oliver’s greater goal of recreating life. With the aid of one of his father’s former assistants, Oliver constructs a female monster from the body parts of various murdered people and begins to deal a horrible fate upon any who dare stand in the way of his desires.” (courtesy Wikipedia)

REVIEW:
The Public Domain escapee that I’ve tracked down and captured for you this week is Frankenstein’s Daughter (1958), another in a long line of adaptations of Mary Shelley‘s classic horror novel, with a twist. Doctor Frankenstein’s grandson Oliver (Donald Murphy) moves to Los Angeles to create a female monster using a teenage girl named Trudy (Sandra Knight) who, of course, goes on a killing rampage. The rampage isn’t the twist, obviously, the name Frankenstein implies a rampage at some point. Made by the same creative team that brought you Giant From The Unknown (1958), She Demons (1958) and Missile To The Moon (1958), it’s understandably difficult to find three positive words in a row to write about Frankenstein’s Daughter yet, despite its lack of redeeming features, it refuses to go away and die quietly in a corner, even though you might. But try not to. Someone must survive to warn others of one of the most disturbing daddy-daughter films since That Hagen Girl (1947)! 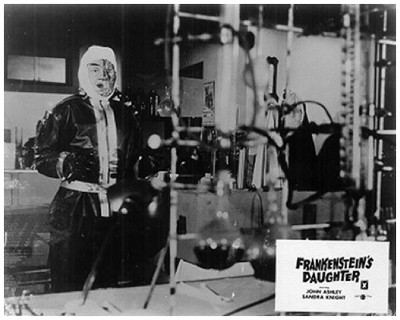 What does turning Trudy into a she-demon have to do with Oliver’s stitch-by-numbers monster? Why does Trudy allow herself to be bullied, drugged and patronised by everyone else in the movie? Why does her boyfriend Johnny (John Ashley) mope around pretending he’s James Dean? Would I ever ask stupid questions to fill-in space? Shave your answer on the back of a cat and send it to Horror News for a chance to win a stern reply from the editor. Second prize is a restraining order. Frankenstein’s Daughter was also released as She-Monster Of The Night but, if you ask me, it should have been called The Girl Who Lived In A House Of Frankenstein, or I Grafted A Blonde’s Head Onto A Rotting Corpse. Now that I’ve got the major plot points out of the way, let’s talk about the people in front of the camera, generously and somewhat erroneously described as ‘the talent’. 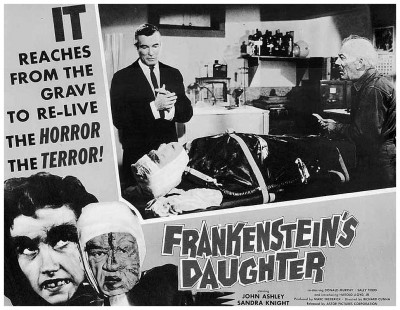 The dedicated but misguided scientist is played by Felix Locher, who waited until he was seventy-three years old before he started his acting career. He was visiting his son Jon Hall on the set of Hell Ship Mutiny (1957) when the director convinced him to play an old Tahiti chief. Although born in Switzerland, Locher was typecast as old ethnic stereotypes in more than thirty film and television roles, none of which were Swiss, although they were cheesy and full of holes. Donald Murphy, as Oliver Frank, says he’s the last of the Frankensteins, but I have trouble believing him. There were at least two other family members running around that year, in The Revenge Of Frankenstein (1958) and the anachronistically titled Frankenstein 1970 (1958). Murphy was a regular on television shows like Schlitz Playhouse and Perry Mason, but he realised his best work in 1971 by retiring from acting altogether and finally passing away in 2008. There will be no encores. 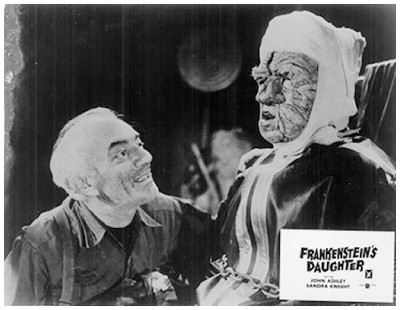 Harold Lloyd Junior is the son of the great silent comedian also named Harold Lloyd, who proves the theory that talent is not hereditary. Just wait until you see his feeble attempt to sing along with Page Cavanaugh and his trio. He would have done better if he remained silent like his father. Keep an eye on the guitarist, and the other eye on the bass player, and stare in cross-eyed amazement as they forget the lyrics. Sandra Knight certainly has her work cut out for her as both the damsel in distress and the monster. A bit part actress in many television shows, Sandra Knight appeared in a few horror films including Roger Corman‘s The Terror (1963), and married that film’s star, Jack Nicholson. This marked the beginning of her ‘lack-of-judgment’ phase, which ended six years later with her both divorced and unemployed. 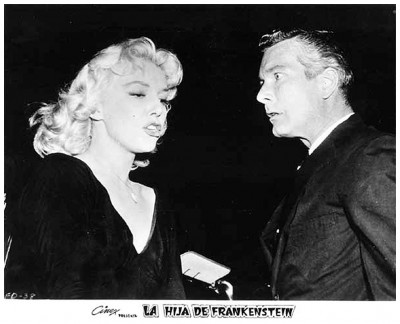 Least but not last is John Ashley as our brooding hero Johnny Bruder. The writer must have taken a number of seconds to come up with that name, each one of them wasted. Despite having a rather lucrative career after Frankenstein’s Daughter as a character actor, film director and television producer, Ashley is best remembered as the narrator behind the opening sequence to The A-Team, an unfathomably successful television show he also happened to produce. The monster itself is truly terrible. A male body with the severely mutilated head of a female hit-and-run victim is simply asking for gender confusion. He? She? It? is mostly played by Harry Wilson, Wallace Beery’s former stunt double, except when on fire and George Barrows of Robot Monster (1953) fame takes over. 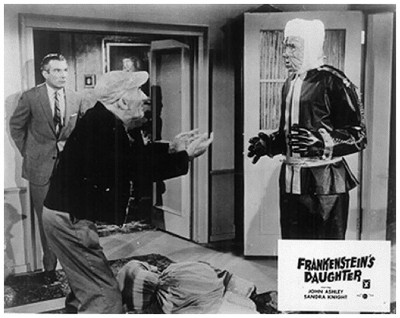 There’s also ex-Playboy Playmate Sally Todd as sexy Suzie Lawler and John Zaremba as the not-so-sexy Lieutenant Boyle, both of whom you’d recognise from literally millions of television appearances, which I won’t list because I’m not the IM-bloody-DB. The moral of the story is simple: If you love something set it free. If it doesn’t come back, run it down, sew its head onto a mutilated corpse and put 40,000 volts through it. A lesson we could all learn from. Although well-photographed, Frankenstein’s Daughter nevertheless exhibits the full range of B-grade symptoms, like illogical plotting, vacant characters, and performances that don’t mesh. And what possible charm did anyone ever see in the desperate antics of Harold Lloyd Junior? The obvious answer is that time, money and sheer laziness made these considerations completely irrelevant. 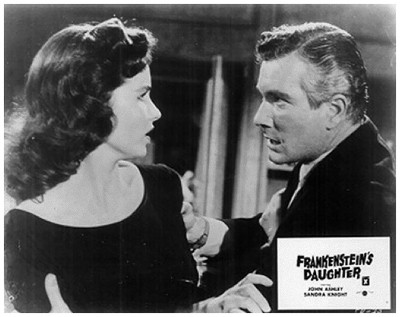 But there’s lovely Sandra Knight, so memorable as the crusty-faced bug-eyed monster who dominates the first half of the movie. If only she’d gone on just one date with Oliver, perhaps he wouldn’t have used her as a guinea pig but, then again, plot development takes time, while a random kidnapping only takes thirty seconds. The actual monster of Frankenstein’s Daughter looks like a clumsy fireman with thick gloves, rubber jacket and bandages that cover most of his head. Makeup artist Harry Thomas was told to create a Frankenstein mask to be worn by a man without being informed that it was meant to look female, and in a flash if inspiration that saved the production he…applied some lipstick. Director Richard Cunha told me that when he saw the makeup just before filming, he broke down in tears. I know I did, and I’m sure you’ll drench your seat in one way or another. So give your chair seven days to dry out and I’ll see you next week here on…Horror News! Toodles! 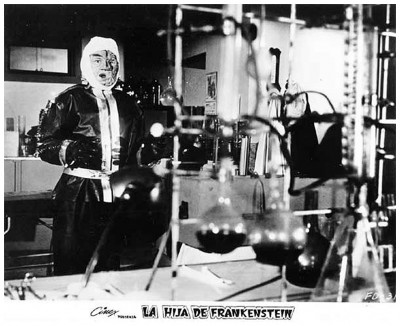