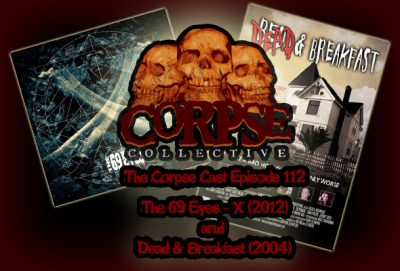 Welcome everyone to episode 112 of the Corpse Cast! If you’re familiar with our show you have come to know that with each listen, there is a lot of things to be learned… No… I’m not talking about learning about film or music as much as you learn what’s really important in life. For instance this episode we learn who would win in a mud wrestling match between the two biggest Goth-Rock bands from Helsinki. We learn that Shane’s got a great baritone voice, and we learn that two dudes can sit and talk about tenderness for about three hours.

This episode we’re talking about The Gothinkis from Helsinkis in The 69 Eyes, and their album from 2012 entitled “X”. We’re also taking you down to a place where the landscape is filled with farmland, rednecks, and zombies possessed by an angry baby spirit with 2004’s Dead & Breakfast.