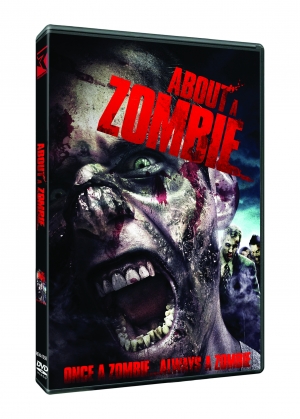 When a family is publicly outed for harboring a zombie after their son, Billy, is infected and turn into a flesh eating monster, a film crew arranges to document the family, their zombie son, the neighbors and a local crime boss who is out to destroy all zombies.

About a Zombie (A.K.A. Portrait of Zombie) is a mockumentary style film from Revolver Entertainment from director Bing Bailey that takes a unique look at the zombie film conventions. Instead of survival of the living, it is all about the survival of the family. In most films, zombie stories typically begin with the loss of family and society firmly in place. About a Zombie takes an intimate look into a single family examining what happens when the eldest son is infected and confined to the home with the family protecting him and providing for him. On this level, the film succeeds marvelously. Unfortunately the film does not feel confident enough to remain focused on that single aspect and resorts to adding in contrived elements with the documentary film crew the undermines the main story. This results in an uneven film that is further shaken by the varied approaches to the film itself: mockumentary, conventional film, found footage, interviews, structured. However, the strength of the characters and the acting keep the film on track making it fascinating and engaging throughout. About a Zombie is a winner even if it does not set any trends or break any records.

The story behind About a Zombie develops in an interesting fashion delivering insights into the family, the film makers and the surrounding neighborhood. There have been many films that have delved into the conflict of facing a zombie that was once a loved one; The Walking Dead does it nearly on a weekly basis. About a Zombie takes it to a very personal place, the family itself, and expands from there. It is less concerned about the escalating zombie apocalypse and more about the struggle of the family needing to save their afflicted son while the world around them wants to put him down. The more it concentrates on the parents, the better the film becomes. When the film focuses on the film crew, it becomes hit and miss – mostly miss. Some of the personal interview segments have interesting highlights such as the sound man describing the different sounds the zombies make and the difficulty he has recording them properly. The drama surrounding the personality traits of the director pales in comparison to the complicated and complex conflicts the family face with the zombie in the home, especially the parents. When the neighbors and the local criminal elements are introduced, they are an interesting contrast to the family drama and serve to reinforce the personal nature of the parent’s decisions and emotions – they are facing far more than their own issues as the entire world, it seems, is turning against them. 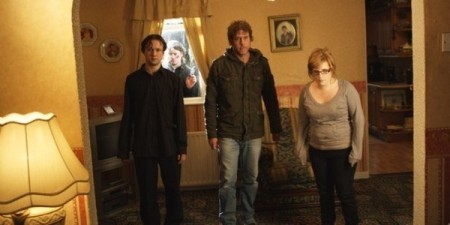 The mockumentary style is an interesting one, but About A Zombie plays a little too loose with the concept allowing bits and pieces that are far outside the film crew to creep into the mix. It sends the narrative off course. At least it does so in a constructive manner, adding to the story providing background to a variety of supporting characters or to the environment. When it sticks to the device of the documentary film makers capturing the family or themselves, it strikes a stronger, more consistent cord. The presentation is a bit confusing on the whole: is this a conventional film about a town where a film crew is documenting a family protecting their zombie son; or, is it a documentary or found footage film about a film crew as they create their film. By the end of the film, the former is most definitely the case, but while watching the film, based on the footage being presented, the latter is communicated far more heavily. The tone and the approach become confusing at times which, regrettably, results in the audience being tossed outside the story far too often.

The winning performances of About a Zombie are those of the actors portraying the parents of Billy the zombie (Patrick Murphy). Geraldine McAlinden is Lizzie, the mother, while Rory Mullen is the father, Danny. Their characters are constructed with a sympathetic approach that elevates their story far stronger and far more effectively than any other plot of the film. Their love for each other, the love for their son and their heartbreak drive the main story. Rory Mullen is likely to be the favorite of the two, of the entire film as he is presented in a more leading role. His conflict is brilliantly realized: supporting his wife and holding on to whatever spark is in his son that he can versus the fact that Billy is a zombie, a flesh eating ghoul that should be put down. These two win the audience over very quickly with a short, sweet and touching interview as the couple sit on the couch reflecting on their son’s condition. The script is smart too as their choice of words accent the tone of the film and the events when the speak of Billy eating everything in the house and realizing that observation remains the same only horrifically skewed. The avoid speaking of him as a zombie and when Danny gets to close to calling his son a monster, Lizzie scolds him. “Why did you have to say that?” she begs. The film could have had twice of much of McAlinden and Mullen and been all the better for it. 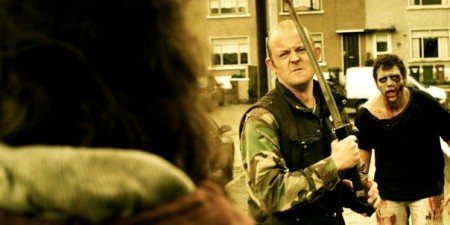 As far as the zombie element of the film, About a Zombie is far better suited to concentrate on Billy and his affect on the family. When the film begins to explore the zombie epidemic, it suffers a bit exposing its budget and limitations. As with many low budget zombie flicks, the zombie horde is less effective than those affected by the zombies. That aside, the film conveys the nature of a zombie outbreak without resorting to a full fledged World War Z apocalypse. The infections are localized and somewhat contained making it feel very much aligned with a Night of the Living Dead feel. The film establishes its own rules such as a one minute deadline to address any bite in order to save the bitten. The mother has a horrific scar to accent the exposition that is effective. Later the camera man faces his own encounter with a bite. And the film ends on this notion as well, clumsily returning back to the film crew’s story. It is Billy, the Bub-like zombie, that gets the most attention chained up in his room fitted with a muzzle to prevent him from biting the family. The film excels when it has the brother forced to care for him or graphically showing the lengths Lizzie will go to feed her son raw human flesh. His escape is inevitable; but, unfortunately the tension surrounding that is never drawn to satisfaction. It gets close when Billy’s long time girlfriend, and mother to his unborn child, gets too close for comfort. 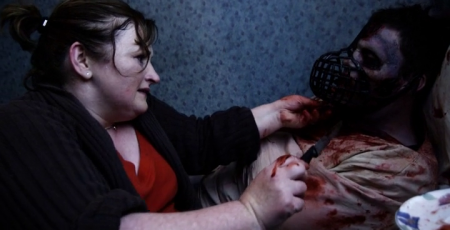 About a Zombie is an interesting, intimate look at the zombie. It succeeds the more it examines the personal toll it takes on the family, especially the mother Lizzie. Unfortunately it has a hard time staying away from the conventions of zombie films that keep it from becoming a home run. It is unique enough to deserve a look. It’s examination of the family dynamic and the effects a zombie has on a neighborhood are fascinating and well explored. The direction is sharp and varied, but the design of the film is off-putting and often confusing. Much of the acting is fantastic with Geraldine McAlinden and Rory Mullen providing heart and emotion to their characters, the conflict and the film overall. About a Zombie is a perfect festival film, emotional, different, tonally surprising, but it likely lacks the punch and conviction to win over a mass audience. Take a chance on About a Zombie, it will likely satisfy and impress. 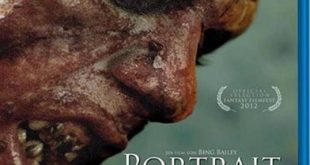