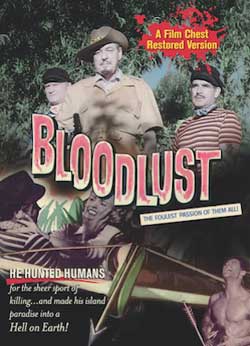 A crazed hunter kidnaps people and turns them loose on his private estate, where he hunts them for sport.

I’m pretty sure that no one involved in the production of “The Most Dangerous Game” (1932) ever thought that it was going to be as influential a film as it turned out to be. Why influential? Because it’s been remade thematically at least eight times that I can think of: Hard Target (1993), Surviving The Game (1994), The Pest (1997), Slave Girls From Beyond Infinity (1987), Turkey Shoot (1982), Deadly Prey (1987), The Woman Hunt (1973) and I’m sure I missed quite a few more. It also inspired a grade Z gem called Bloodlust, which really surprised me with its really inspired sense of sleaziness & gore. 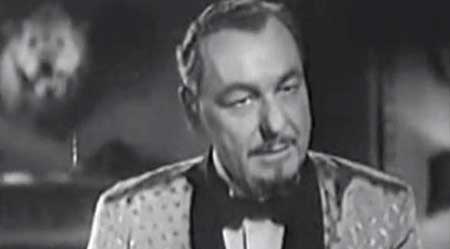 Even if you’ve never seen the original film you’ve seen one of its myriad homages but just in case there’s one or two of you out there who hasn’t, Bloodlust tells of two young couples, Johnny (Robert Reed) & Betty (June Kenney) and the younger Pete (Eugene Persson) & Jeanne (Joan Lora), who are out for a jaunt on a boat when they happen upon an island and decide to drop anchor there to explore it. Sadly for them the island is inhabited by batshit crazy Dr. Albert Balleau (Wilton Graff) & his silent henchman Jonder (Bobby Hall). They find two other people (one of whom is the good doctor’s wife) and they discover that they’re to be used as prey in a hunt in which the nutty doc plans to mount them as statues in his bizarre underground lair which already has a few of his victims on display. In addition to our hapless couples, the doctor also has the drunken skipper of their boat, Tony (Troy Patterson) & some poor schlub (Bill Coontz) to hunt down and add to his collection.

Slowly the victims begin to dwindle away and we find out how the doc’s mind really works thanks to a whole mess of needless exposition that he spouts off whenever he gets a chance to. During all of this talk there are a few opportunities for the remaining survivors to overpower the doc and make their escape but the script (by director Ralph Brooke) wasn’t written to be what you & I might describe as “logical“. As a matter of fact I wondered why they just didn’t all jump him at one point when he’s sitting in a seat (unarmed!) & mouthing off about his plans for them. Its not like he’s bigger than any of them, he’s actually pretty frail looking and doesn’t seem like much of a threat if he isn’t holding onto his rifle. 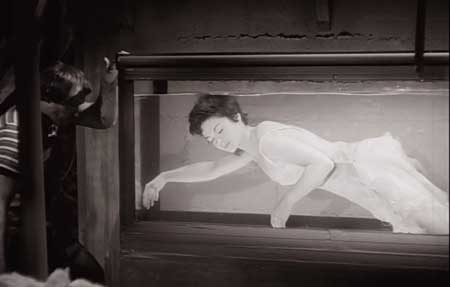 As you can probably tell this isn’t the most accomplished of features but it’s still a pretty entertaining one. It’s cool to see Reed in action before he became one of the most recognized faces on earth as Mike Brady, patriarch of TV’s The Brady Bunch (1969-74) and while neither he or his co-stars do anything to stand out in the film all of them give good performances. The cinematography (By Richard E. Cuhna, director of 1958’s epically bad “Frankenstein’s Daughter“) is actually pretty sharp and belies the film’s low budget. Brooke’s direction does as good a job as possible to keep things lively especially when you consider how leaden a lot of the dialog he wrote is: “Listen Mr. Belleau, fun’s fun – but if you think we’re gonna be the clay pigeons in your shooting gallery…you’re just a little far out!” 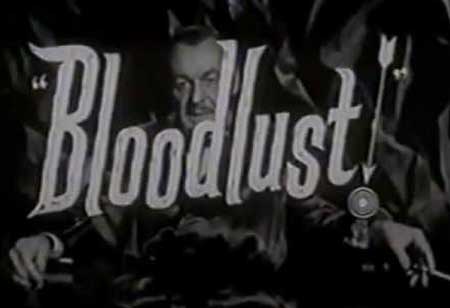 What makes Bloodlust special is how downright grotty it becomes at times! There are scenes during which bodies are tossed into acid baths, human skin, guts & body parts being removed from a boiling vat & an especially nasty impaling in which blood is literally pumping itself out of the victim’s wounds in great detail (Or at least as detailed as arterial spray can look in black & white). While the film only takes place in a few rooms & the underground cavern looks a lot like it was constructed out of crumpled up black construction paper it still conveys a sense of claustrophobia that enhances the overall feeling that everyone is doomed to end up in a bad way.

Although the film has been available in some run of the mill horror dvd collections over the past few years, the geniuses at Film Chest Media Group have managed to cobble together a release that is about as pristine as the film is ever going to look from the original 35mm film elements. And while most would question the logic in working as hard as they did to make a film like Bloodlust look as good as it now does, I sincerely applaud their efforts especially since I’d never heard of the film before I got this in my mailbox and found myself pleasantly surprised by its grade Z luridness. There are far better remakes of The Most Dangerous Game to be watched for sure but how many of them feature Mike Brady trying to escape being shot to death on a mysterious island while wearing some really tight clothing? 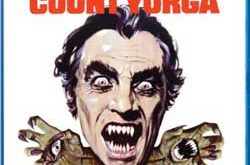