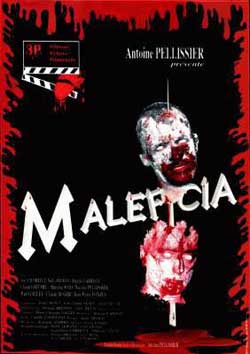 A family of nobles in Carrozza travel in a forest in which, in the same moment, a satanic cult completes human sacrifices made up of young girls.

One of the harder to find extreme films to come out in the underground community, “Maleficia” can now be purchased as part of the Dr. Gore DVD from Metaluna. In fact, I initially found very little in the way of information on this release until discovering its resurrected DVD release. The film is now featured as a part of the “Dr. Gore” DVD release which not only contains “Maleficia” but other Antoine Pellissier releases packaged together…so gore hounds who have run into brick walls on this one can now complete your collection 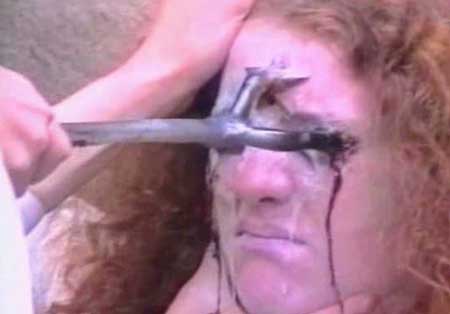 In any case you can read more and purchase Maleficia here

Maleficia is an extreme gore product that debuted in 1998 bearing a curious warning title card before the film begins. This French film was released with English subtitles under the Metaluna release. The film is also a noted creation by the “master of trash” himself, Antoine Pellissier.

My first reaction was that even released on DVD, it was apparent that the original was extracted from a worn VHS tape. I suppose it adds that retro quality, but in this case, you could tell that it was distributed on poor copies to begin with. Now 1998, was still somewhat pre-torture p*rn era, so extreme films were still very much traded among the underground catalogs and such. While I consider this “old gore”, it still is plenty effective and quantity driven.

“Maleficia” is a film that shows maturity in some effects and old school in others. Borrowing form the influence of the Dawn of the Dead movies, this film feature alot of intestinal feasting and belly spills that make sure to stay on screen long enough to disgust most and please most gore hounds. The film is also very Satanic beginning with gory rituals and ending on an extreme gorefe4st ritual that pretty much adds to the bar of “over the top” film productions. Eye gouging, tongue-ripping, beheadings, stabbings, dismemberment, face carvings…..shall I go on? 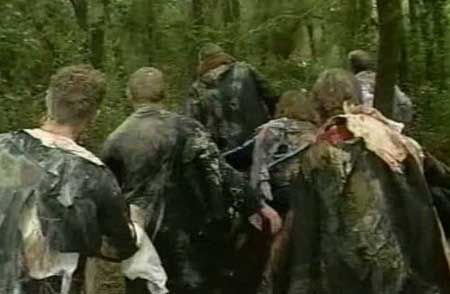 Our story begins with a well to do family of nobles who have inherited their now deceased dead uncle’s estate. As they head forward on horse and buggy towards the location, the buggy driver stops to investigate some strange noises. This also signals the change in scenery as we are taken to a satanic cult in mid-ritual setting the stage for the sacrificial victims chained to the walls. Prepared as an offering to their dark lord, the group begins to torture and mutilate the chained participants with some pretty hard core gore tactics.

One of the more gruesome scenes depicts a branding iron being shoved into a young girl eyes while they smoke and bleed. Soon after the group begins a series of intestinal slaughterings that have innards falling about in pure chaos. Though that’s not all, as the fools have also summoned the dead which arise in old school zombie firm to terrorize and inflict more chaos. 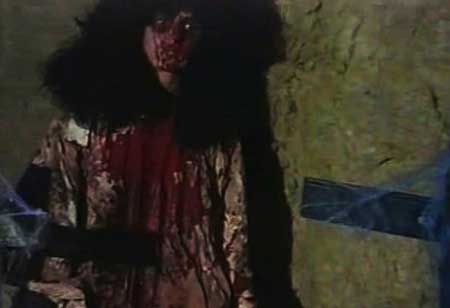 “Maleficia” highly succeeds in the gore factor mainly because the film makes sure to take his time with giving its viewers slow grind effect sequences. Such is the case where a zombie is impaled thru the head only to focus on its slowly brain matter bubbling up from the impact point. What makes this film harder to sit thru is not its violence but that it spans over 1 hour and 40 minutes, way too long for a film of this nature.  Much of this shown could have been left on the editing table rather than the long sequences of people being chased running thru the woods and zombies emerging from ever conceivable angle. 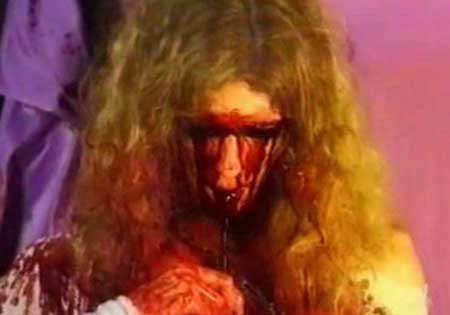 The group soon finds that taking to the mansion is not any better than the flesh-eating dead that chased them in there. As the mansion is overrun with Satanists, black robed killers are waiting around every corner to use these folks in their sacrificial rituals. The contrast between zombies and Satanists makes for a setting of gore, violence and death that is more than enough for any hardcore fan. 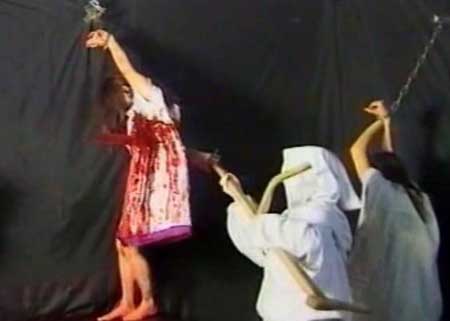 When the guests take to the basement, the dead arise from coffins covered in gore excrement. Why… they are covered in gore excrement is up for debate, but my guess is that filmmaker Pallier just liked to get as much use out of his pig guts props as he can. There is one sequence where John becomes possessed that is quite humorous seeing that he spans this possession transformation over several minutes. This aspect continues even more when they finally reach the final Satanic blood bath finale. Again we have more extended killings and bludgeonings that could have easily sufficed with a quick scene or 2. Instead Pellissier makes the most of his gore props with way more torture, slicing and disfiguring than required. The film itself weighs down in overextended scenes and filler, however anyone seeking this film out “really” is seeking out the extreme nature which is delivered 10-fold.