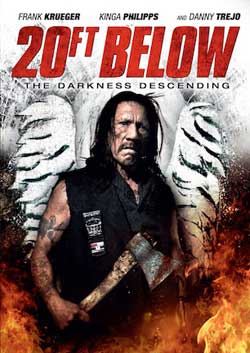 Below the streets of New York is a dark and dangerous world hidden in the shadows of abandoned subway tunnels and miles of forgotten infrastructure. When a young documentary filmmaker goes into these tunnels to uncover the unseen stories of the people living below our feet, she finds out that there is more to be afraid of than the dark. A mysterious figure, living beyond the reach of the law, has declared war on the outside world that threatens to tear apart the fragile underground society living in the tunnels and maybe even the city above it.

According to my count, this is the 433rd DTV film released in the last 6 weeks with Danny Trejo’s oh so inviting mug gracing the cover. And if I took the actual time to log the actual minutes he’s in each of these movies & add them all together I reckon he falls just shy of 180 minutes total…this is one hell of a good racket Mr. Trejo has going on. To be fair, he puts in about 18-20 minutes here in the most recent of his straight to Redbox epics 20 ft. Below: The Darkness Descending but it might as well been his usual 5-10 minute overpaid cameo appearance judging from the final product.

Written by & starring Frank Krueger the film tells the story of a documentary filmmaker named Chelsea (Kinga Phillips) who decides to go down deep into the bowels of the NYC subway system to document the lives of the disenfranchised who’ve made a home of sorts for themselves deep down below the streets of New York City. But she runs into more than she expects when she happens upon Angel (Trejo), who is in the process of building an army to wreak havoc with the subway system. Luckily she also runs into fallen former cop Jake (Krueger) and since he’s taken it upon himself to protect those who are just trying to get by down under she ends up under his protection. 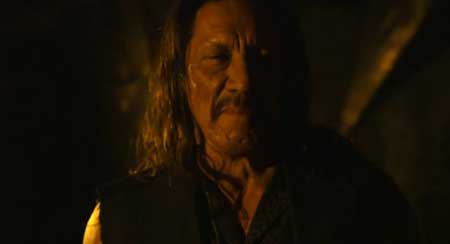 Now exactly why Angel has it in for the world above isn’t really made exactly clear. There are some throwaway lines about “The System” & “Government” bandied about but it never really felt like Angel was especially serious about either of them since his “Army” consisted of about 6 people who were about as threatening as the drunk guy that always manages to ruin the last good Halloween party you attended. There are a lot of questions I asked myself while I watched this claptrap, the first being “Why me?” but then I began to wonder about a few other things like exactly why is Jake living down there in the bowels of the subway system in the first place? Once again there’s some scuttlebutt tossed about regarding the murder of his beloved wife but it’s never quite clear as to why he’s down there. In addition, exactly why doesn’t Chelsea ever leave to take a shower or something? I mean it’s not like she lives down there. And exactly how is she getting any usable footage when she doesn’t have a light to illuminate her subjects in the perpetual darkness of the tunnels?

And why is it that nearly everyone she runs into down there is wearing some especially clean clothing despite the fact that they’ve been living underground for a good while? One characters clothing even looks dry cleaned & professionally pressed and although they’ve managed to forge together some of the basic necessities to survive down there I’m almost positive a dry cleaners ain’t one of them. I also question how much time Trejo actually spent with either Krueger or Phillips since whenever they’re in a scene together it’s always shot from behind the heads of whomever is being spoken to, enabling a stand in to replace either of the three depending on who’s in the shot. And why does the title feature “20 Ft. Below” in it when one character establishes that they’re at least “200 ft. below”? Somebody had to have asked these questions during production…

The script is essentially one cliché after another strung together until they approximate something you might run into on the Lifetime channel (“Mother, May I Descend Into the Darkness with Danny Trejo” maybe?) and if that’s your bag of Fritos then you’re in luck and your $2 rental won’t be a waste. But if you’re looking for something with some meat on its bones then you’re gonna wanna stay away from this flick, it’s a melodrama with no drama, an action thriller with neither action or thrills and despite his extended appearance in this as compared to his recent DTV epics, a Danny Trejo movie with very little Danny Trejo. I will say that they did a fairly nifty job making the same dark room look like different sections of the subway for a little while but even that becomes so noticeable after awhile that I was begging (to no one in particular) for a change of scenery. Director Marc Clebanoff also directed 5 webisodes of a series entitled “The Darkness Descending” back in 2009 that this film is based on and while I’ve never seen them I doubt that the production values have been upped very much from what I got with this movie. But somehow, please don’t ask me how, he does do a good job of keeping the entire thing perversely watchable in a “Holy Crap” kind of way, I guess that’s something. 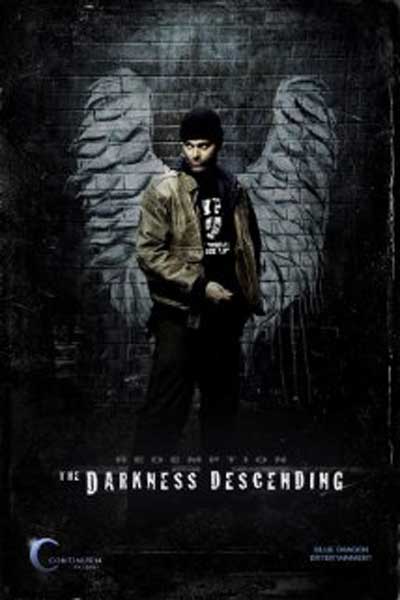 Maybe I wasn’t the best person to review this film as I was gainfully employed as a subway conductor for the NYCTA for 15 years and I interacted with a lot of the people who made the abandoned subway tunnels of NYC their home. Believe me when I say none of them looked this fresh faced & clean clothed – at least none that I ever ran into. And I know there are a million better stories to be told about their existence than this one (Marc Singer’s documentary “Dark Days” (2000) is one of them) so this film left a bad taste in my mouth after it was done. But (& this is an enormous BUT) if you’re a Trejo completest then I guess there’s nothing I say about this that’s gonna change your minds about renting it…is there? Although I would be remiss if I didn’t remind you that there are (According to IMDB) twenty three more films featuring your favorite bad ass coming soon! Some of them big budget (Muppets Most Wanted) for sure but with titles like Volcano Zombies, The Damned & Beyond Justice among the other 22 I suspect that we’ll be seeing a lot more DVD’s featuring Mr. Trejo’s sunny face in your local Redbox machines and sadly this isn’t as good a thing as it used to be.

But it doesn’t appear that Mr. Trejo minds since he’s making out like a bandit appearing in them…QUANTITY OVER QUALITY! 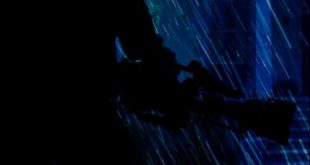