Every now and then one of these films come along. It gets financed, shot, edited and then NOTHING! It sits there collecting dust for an extended period of time until eventually someone gets off their ass and picks the project up. ODD THOMAS is one of those films, kind of.

Directed by Stephen Sommers and starring Anton Yelchin (that’s the dude that played Brewster in the Fright Night remake) this one has all the makings of a fan favorite but legal woes and other assorted issues have kept it under wraps, at least here in the states. Parts of the world have already seen it, it was released over the summer in the Philippines and other Pacific areas.

IMAGE picked it up for US distribution but the aforementioned legal issues have kept this one on the shelf. Till now. DIRECTV consumers can watch it now via VOD.

Still now word on any DVD or Blu-ray plans and no word on if any other VOD platform will be picking it up.

Strange is all I can say. But, if you subscribe to DIRECTV, order it up. It’s actually a decent time. 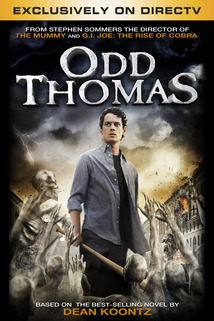