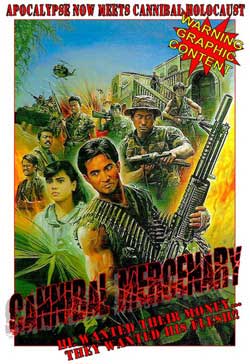 Wilson, a Thai veteran of the Vietnam War and all around master of combat, leads a group of men on a daring mission into the jungles of Vietnam to topple a dangerous drug lord and his cannibal army.

This is one of those movies that films like Death Proof or Planet Terror or even Hobo With a Shotgun strive to replicate. It was released as Cannibal Mercenary, but in English called The Mercenary and on screen in the credits called The Jaguar Project. There appear to be multiple cuts throughout the film, and doing a little research I found out there are actually other scenes not in the version I saw that were placed in the movie in a less brutal, cut  up version (something about westerners searching for a Buddha statue?). There is little to no information about this movie anywhere; even the movie database on the internet has next to nothing, not to mention a totally different cast listing compared to the opening credits. But, when all is said and done, Cannibal Mercenary (my preferred title) is well worth a viewing, and if you can find it for sale, pick it up. You won’t be disappointed. 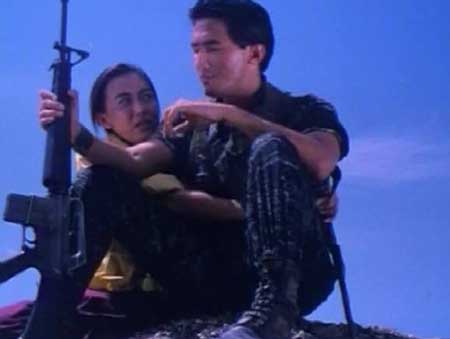 Possibly directed by Hong Lu Wong, this is the story of a Thai soldier who had been in Vietnam who is suddenly asked to go back on a special mission. While not being given further details, he is told that he will be paid $500,000, enough money to pay his daughter’s hospital bill and save her from dying of polio. We get a couple of flashback scenes of him visiting his young daughter in the hospital, then before we know it we are in a rainy jungle with a group of Thai soldiers on a mission to find a contact who will tell them their real mission.

Before you get too excited, I will point out that the title, Cannibal Mercenary, is somewhat misleading. This movie is far more Rambo or even Inglorious Bastards (note the spelling: Castellari, not Tarantino) than it is Cannibal Holocaust or Make Them Die Slowly. The setting is the jungles of Vietnam(?), but that’s where the comparison to the cannibal subgenre of horror films ends. Well, until the end anyway… 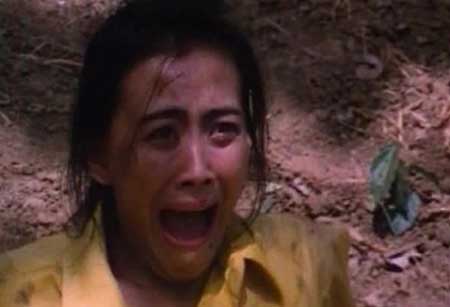 So, we have a group of soldiers put together on an unknown mission (you’re welcome, Predator). They are ambushed multiple times, meaning there are multiple shoot-outs and opportunities to blow things up. Actually, throughout its entire run time, Cannibal Mercenary is an action packed, violent film. Lots of martial arts fighting. It’s as if the director decided that any down time would be viewed as failure, so he made it bloody as hell. There are decapitations, death by skull crushed with rock, grenades in shirts, and a very strange snake wrestling scene that doesn’t seem necessary but, hey, why not? Eventually, though, the group stumbles upon booby traps and reduces in number. When they finally meet their contact, they find out their mission: defeat the renegade VC colonel and his Dracula army who are smuggling drugs and killing the villagers. 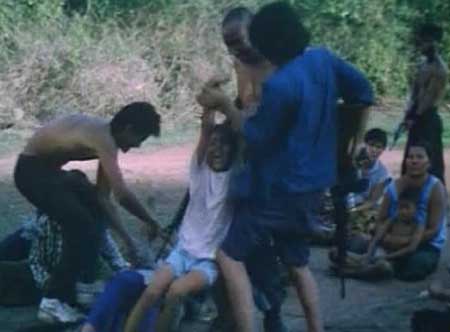 Honestly, this is a pretty cool movie. It takes a very anti-war stance in the way it depicts what is going on. There is no prettied up, Tom Cruise or Charlie Sheen in camouflage nonsense here. No, this movie follows the William T. Sherman school of thought; “war is hell.” We see villages ravaged by the uncertainty of war, soldiers partially out of their mind due to combat shock, and in no uncertain way we see that war isn’t good for anyone. And then we see the brutal torture that goes on at the end, eyes gouged out, heads split with hammer and spike, arms torn off, and we can’t help but imagine things like this really happening.

Cannibal Mercenary is overdubbed in English, and not very well. There are a lot of jumpy cuts, going back and forth from too bright to too dark, depending on the shot. Toward the end, when we get to the only “cannibal” parts, something suddenly seems familiar about this movie. It’s not the actors, it’s not the setting; it’s the soundtrack. We’ve heard this song before, back in the original Dawn of the Dead. But seeing as how that brings up happy memories, and seeing as how it perfectly fits the moment, we can give a free pass here. 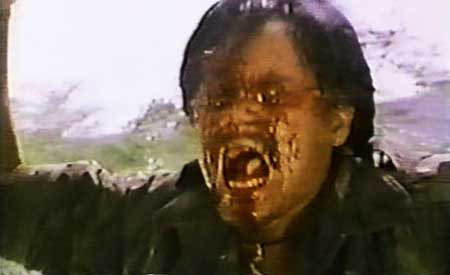 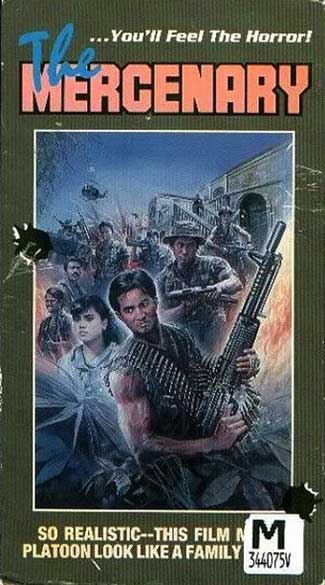 I don’t know where you might find this movie. I saw it for sale online, an out of print copy, and it was going for $200. It’s not worth that. But if you do see it somewhere, maybe your local video store is closing up and selling off their stock, I’d say grab it. It’s action packed, it’s brutal, and above all else, it’s fun.