Muticia the Movie Goddess welcomes viewers to her Movie Morgue for a special screening of the horror anthology Tales From Mutantville comprised of Indigo Child, Family Fiend and Scarecrow At Midnight.

Horror anthology films have been something of a mixed bag throughout the decades. For every Dead Of Night (1945) & Tales From The Crypt (1973) there’s a Creepshow III (2006) or The Monster Club (1981) to make us regret wasting our time/money. Tales From Mutantville is an ultra low budget anthology that’s looking to make its mark on the scene and while it’s really no great shakes, its got a few things going for it that made the time go by a whole lot quicker while I watched it.

Hosted by Muticia, the Movie Goddess (Vanelle) and comprised of three short segments (It’s only 39 minutes long), Tales From Mutantville starts out with a quickie called “Indigo Child” which involves a psycho who’s murdered three kids in the last three weeks and the efforts of a young priest (Matthew Ewald) to keep the town of Gold Hill, where the murders are taking place, from tearing itself apart. Despite the fact that it does very little to explain its title it’s a decent enough opening segment with some nice cinematography, good acting and a really odd ending that doesn’t make much sense at all but entertains nevertheless. Biggest problem here is we see the murderer going about his dirty deeds in the beginning and although it takes place at night with the killer covered in blood & never looking directly at the camera, it’s still terribly obvious who he is when he appears later in the film. But besides that…it’s OK.

A family finds itself being killed off one by one in their home and apparently one of them is the psycho in the second segment, “Family Fiend”. This one looks/feels like a rejected episode of Tales From The Darkside, but that doesn’t make it bad. What makes it bad are the poor performances, cheap gore effects & stupid ass story. It started out interesting but quickly (Really, really quickly) devolved into a group of people yelling at each other in a basement trying to figure out who doesn’t like them and why. Actress Kayli M. Tolleson (The Indigo Child of the first segment) returns here primarily to utilize her hellacious ability to scream and nothing else. She is one terrific screamer though…

The third episode is called “Scarecrow At Midnight” and tells the story of a girl who’s being harassed by some local yokels on Halloween night and the special scarecrow she has in her front yard that decides to defend her in a most gruesome manner. This one was filmed at the World Famous Myers House in North Carolina but there are only two short scenes that take place in the actual house so that’s not much of a reason to want to see this. Once again, it’s competently shot but the acting here leaves something to be desired. There is a bit of decent gore on display here though with a fairly hilarious kill which comes by ripping off a woman’s face. 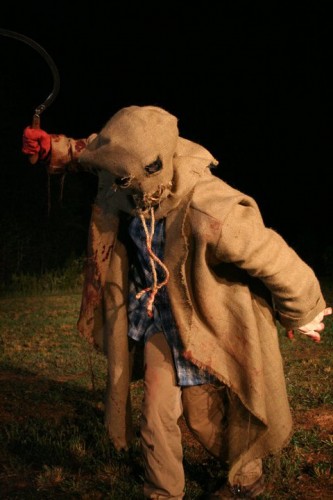 Although I really didn’t like too much about Tales From Mutantville, there is a lot to like on display here. All of the episodes look pretty good and are directed as well as could possibly be expected. All of the performances are strong and don’t feel as amateurish as you might expect them to be. Matthew Ewald stands out with a good outing in “The Indigo Child”. Vanelle is not only very easy on the eyes but she displays a coquette like demeanor here that’s both playful & just a little bit naughty which really works for her role here. Did I mention she’s really easy on the eyes…?

It’s obvious that everyone involved with this production had their hearts in the right place and I’m sure there are those of you out there that’ll really enjoy Tales From Mutantville. I can never totally dislike a production that really tries to entertain despite not having much of a budget to work with and I won’t start here. The strongest aspect of this production is its brevity, at 39 minutes long it’s over before you can even begin to ask all of the questions you’ll inevitably have. It begins, entertains (A little bit) and then it’s all over. It’s a harmless & relatively fun little flick that’ll keep you creepy company for a half hour or so.

Tales From Mutantville– 2 out of 5 shrouds. 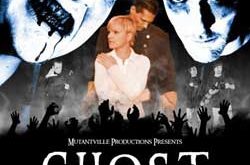 Scarecrow at Midnight to Screen at Fright Night Film Fest 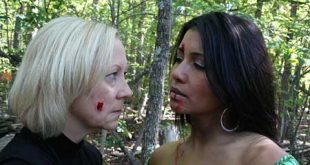