Fright-Rags has released exclusive shirts and posters to commemorate the 35th anniversary of one of the most influential horror film’s of all time, John Carpenter’s Halloween, as well as the 25th anniversary of the fan-favorite sequel, Halloween 4: The Return of Michael Myers. These items are officially licensed by Trancas International Films. 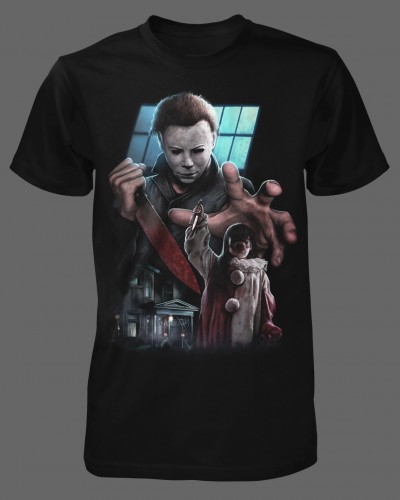 Fans can celebrate “The Night He Came Home” with Fright-Rags’ Halloween box set, which is limited to 800 pieces. Enclosed in a collector’s box, the set includes a shirt (unisex, womens or hoodie) designed by Justin Osbourn, an 18×24 screen-printed poster by Gary Pullin (with 100 randomly inserted glow-in-the-dark variants), a Judith Myers headstone resin magnet, a prismatic sticker and a Rabbit in Red memo pad.

Osbourn’s design is only available on a T-shirt in the box set, but fans can also get it separately on an American Apparel baseball shirt. Another Halloween design, by Christopher Lovell, will be available on a T-shirt, girls shirt or zip-up hoodie. It shows cinema’s most iconic boogeyman, Michael Myers, looming over the Myers house.

Lovell also designed a shirt for Halloween 4: The Return of Michael Myers, which features Michael and his niece, Jamie Lloyd. To accompany the shirt, artist Kyle Crawford created a screen-printed poster, which showcases Michael’s infamous mask from Halloween 4. The poster is available as a regular 18×24 print (limited to 400) and a glow-in-the-dark variant (limited to 100). 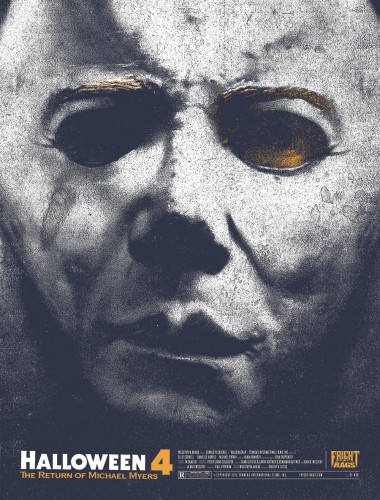 “Halloween is the reason I am into horror today,” explains Fright-Rags founder Ben Scrivens, “And when I began this lil’ company, it was the one film I had longed to sink my teeth into. Perhaps it’s fitting that, this being exactly 10 years after I started Fright-Rags, we’ve been fortunate enough to take a stab at it. It has truly been a dream come true, and I hope this isn’t the last time we work with this iconic franchise.”

These items are currently available for pre-order from Fright-Rags. Orders are expected to ship in late October.