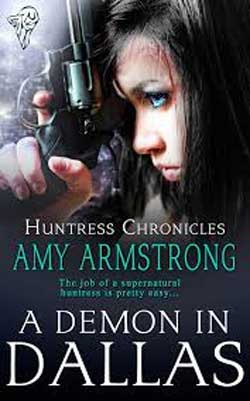 Raven a vampire huntress has just seventy two hours to find her abducted partner Matt. The only key to finding her missing bounty may lie in the hands of her estranged lover, a shape shifter Connor. With fairies, angels, wolves, vampires and witches lurking around every corner the odds are stacked against her as the clock is ticking in A Demon in Dallas.

Upon reading the title of A Demon in Dallas I was naturally intrigued to embark upon the task of reviewing this novella. Then as the initial pages were consumed a certain sense of dread had washed over me. Had the literary universe been punishing me? Did my eyes deceive me? Yet another vampire, fairy, wolf love story; I rolled my eyes in disdain.

We’re taunted and teased with some exploitation involving Raven and her former lover Connor while the physical action threatens to boil over. A clever balance of dialogue, minimal back drop and action carries the story quite nicely. We’re distracted from the ordinarily over saturated subtext of the supernatural and it places a most welcome spin on a tired subgenre.

The protagonist or heroine of our tale Raven comes across as a little irrational, flighty and immature. My primary concern is some readers may have difficulty empathizing with her circumstances. Her infernal insistence on butchering the English language with ‘glitchy’ contemporary references such as ‘Frenemy’ will undoubtedly infuriate serious reading aficionados. I feel that Armstrong is limiting her market in such situations. Where her niche may appear to be in the young adult market with girls primarily eleven to fourteen, the subtext plot virtually conflicts with the sensual eroticism of the story. It becomes somewhat confusing or baffling to comprehend what market the story is going for and places restraints upon a global audience unnecessarily.

Some noteworthy interactions take place between Connor, Raven and the angels and witches in which they encounter. Armstrong seems quite versed in escalating tension with dialogue. With some fine tuning I believe this author may come into her own appealing to a much larger audience on a timeless scale.

The eroticism between the two lovers is scorching hot. It’s clear the author’s strengths lie in creating vivid, intimate descriptions. A Demon in Dallas would no question create more impact if a little more bulk was added with some additional steamy soirees.

Some fight sequences bring something invigorating to the table, perhaps catering to the action and suspense buffs. As the story winds down we’re privy to a sequel in no uncertain terms luring a market of devoted readers. The mystique of additional plot through further volumes will enable opportunity for the plot to flourish.

Overall it wasn’t necessarily my cup of tea but The Huntress Chronicles shows potential and I’d likely embark upon another volume or two.