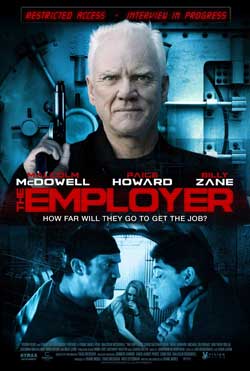 Five highly qualified applicants interview for a coveted job with the Carcharias Corporation, a powerful conglomerate whose business practices are shrouded in mystery. On the night before the last round of interviews, they are all kidnapped and drugged. The next day, they wake up trapped together in a locked room without any hope of escape. Soon the true nature of their situation is revealed when they receive a phone call from the mysterious CEO of Carcharias, known only as The Employer. He informs them that they are about to experience the final interview, but it’s not at all what they were expecting.

As a horror fan, I tend to watch as many movies as I can, and in that span you tend to see movies that steal the plot of a more popular movie. Yes, they might a different twist or new spin somewhere, but at the heart of the movie it’s still the same basic plot. In the last decade there are a few movies that have started the trend, Paranormal Activity, Hostel, and even Shaun of the Dead all have movies that you could watch and make comparisons between the two. But the biggest movie plot that has been taken and changed around would have to be the Saw franchise. There are dozens of movies that take the very basic idea of what would you do to survive and twisted it a little bit to make it their own. The Employer is one of these movies.

One of the biggest difference between The Employer and other Saw imitators like Are you Scared, and Die, is that there cast of actors and actress are unknowns, where The Employer stars Malcolm McDowell, in a great role as the evil employer, and even has a cameo by a well disguised Billy Zane (Demon Knight, The Mad), as Alan. Those aren’t the only two people that you might notice; this movie also stars Matthew Willig (Year One) as the gentle giant Mike. 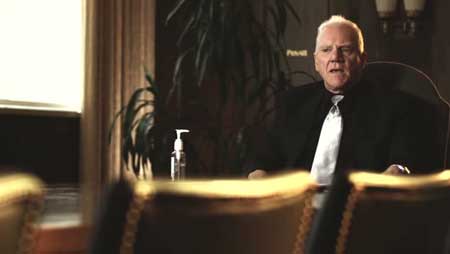 The concept to this movie is very simplistic but done well. One by one five different people wake up and come to realize that they are locked in a vault. They all go around finding out who each either is, and how they came to be stuck together. All signs lead to one thing, an interview that they all had with the same company, Carcharias Corporation, and the same interviewer, Malcolm McDowell. As you meet each of the characters, they show a flashback, uncovering little pieces of background information about everyone, and also showing you how they differ by the way they all answer the same questions differently when asked. The very first thing that really stands out is the different archetypes of each character. You have the repressed nice guy, the timid girl, the bully, the strong willed girl, and the gentle giant as mentioned earlier. As they are trying to come up with a plan to escape there metal tomb, they get a phone call from the interviewer. He tells them that there is only one position available and the last survivor is the one that gets the job. Also as, after each person dies they will get a combination to the vault, freeing the last one standing. 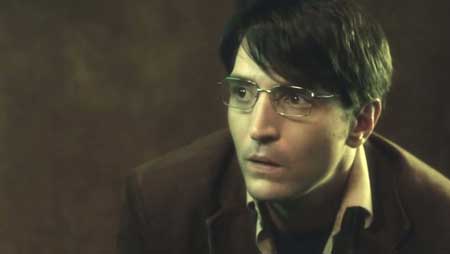 The first idea that is brought up is finding another way out, not playing by the rules of the game. Everyone agrees to this idea, but slowly it gets over shadowed as people play their games, trying to trick each other to let them kill each other off. In between each death we are shown more flashback scenes of each interview. The last two alive are more than likely the two that you thought were going to be there. There is a dramatic fight scene and two fades away to one. You would think that they movie would be over, one person standing to get the job, but it’s not quite done yet. The final person has to then prove to the interview that they are cut out for the cut throat business world. This scene really shows of the acting skills of Malcolm Mcdowell, he does a great job as the ruthless tyrant running a big business willing to do anything for money. 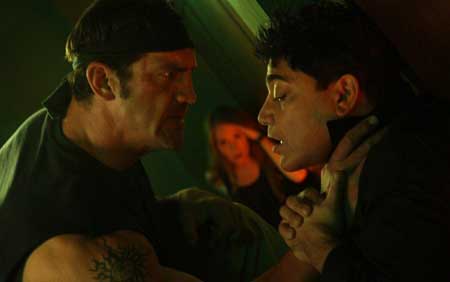 This movie isn’t anything unseen before, but it does have some newer ideas to bring to the table. It’s great to watch all the characters answering the same questions; it gives you a clear understanding of their morals, and wait they are willing to do for money and power. That’s the clear message in this movie, what are you willing to do to get what you want, and they do a great job showing how people will manipulate each other for their own gains. This is one that if you are a fan of Malcolm McDowell, or just a fan saw like movie, check this one out, it’s defiantly worth a watch through.