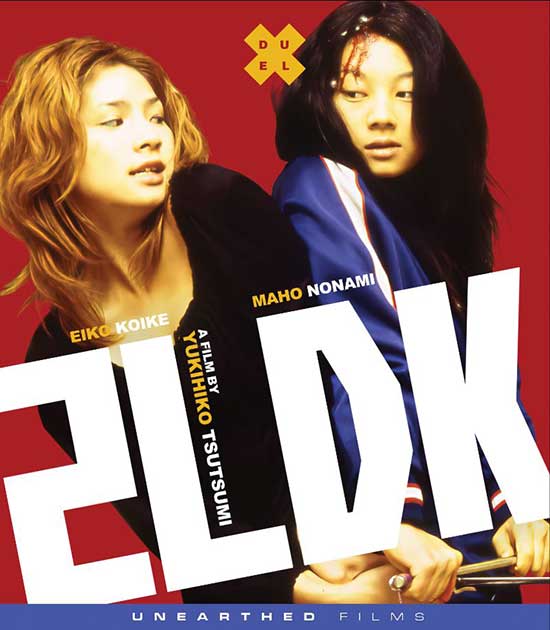 Budding actresses Kimi and Lana share a roomy Tokyo apartment. They manage to work through most of their minor disagreements, but when the girls find out that they’re after the same movie role and the same man, their fights escalate from heated arguments to all-out power-tool battles! The action takes place entirely within the confines of the apartment and makes 2LDK a thrilling ride for fans of offbeat comedies.

What can you say about this film. For me, its one of my offbeat favorites. It’s a horror/drama film with dark comedic flavoring that goes from one extreme to the next. In basic form, it really centers around 2 room mates Nozumi and Lana who bicker quite often. In fact you wonder why they put up with each other to begin with, but it appears they do it to live the high-life in a choice local apartment. The bickering turns into flat out grudge-match madness as they both find they have auditioned for a the same movie role. This is when the real funs begins. You wonder how far they will take this and what makes it funny is they take it all the way and much farther than expected.

I had actually seen this a few years back and wanted to revisit the film for review into our column. In short, I liked it back then and still think its a clever winner. Upon viewing, you are brought into a back and forth discussion between the 2 roommates. What makes it so hilarious is that the director chose to overdub there thoughts out loud as they exchange conversation. 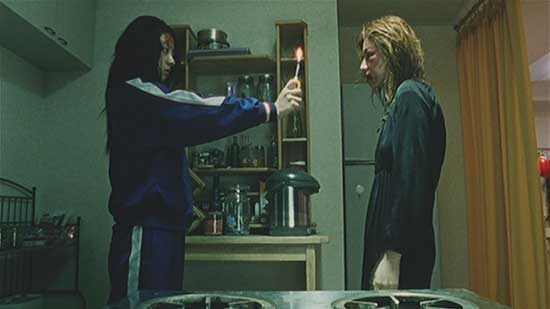 We find out pretty instantly that they despise each other in a confrontational way as we the audience follow along with there real thoughts. Simple accusations heighten as they find as many faults as they can with each other. These incidents combined with the fact that the 2 rivaling girls have completely different personalities add to the clash of wits as each plots against the other. On one hand we have the spoiled and beautiful rich girl Lana who seems to have gotten her way by shrewdness and cunning. On the other hand we have the pretty, well educated but anally germaphobic Nozumi who lets her jealousy of Lana overcome her emotions. They both seem to possess an equally cold disposition when it comes down to it.

The entire set is staged in this apartment and is much like watching a game of tennis as they bicker, connive and attack in a back and forth routine. In fact we never actually leave the confines of this apartment. I found out later that the title of “2DLK” refer to the living arrangements of 2 bedrooms and 1 living room as listed in local papers.

The earlier idea of hearing each of their thoughts slowly dissipates as they become more vocal in there actions and words, a clever notion the director chose to transition into different stages of the film. The 3rd part of the drama is all out ludicrous war. Upon retrospect, this film doesn’t really fall into a clear cut horror category as it works its way into more an action / thriller of sorts. Certainly some of the scenes are horror-driven but the translation comes over different in its presentation of the 2 girls at war. The comedy aspect is definitely in the dark sense as they look for new ways to torture each other. At times, I wasn’t sure if they were just trying to scare the other or were serious, however as there actions increase in intensity it’s pretty clear that each would like to see the other dead. 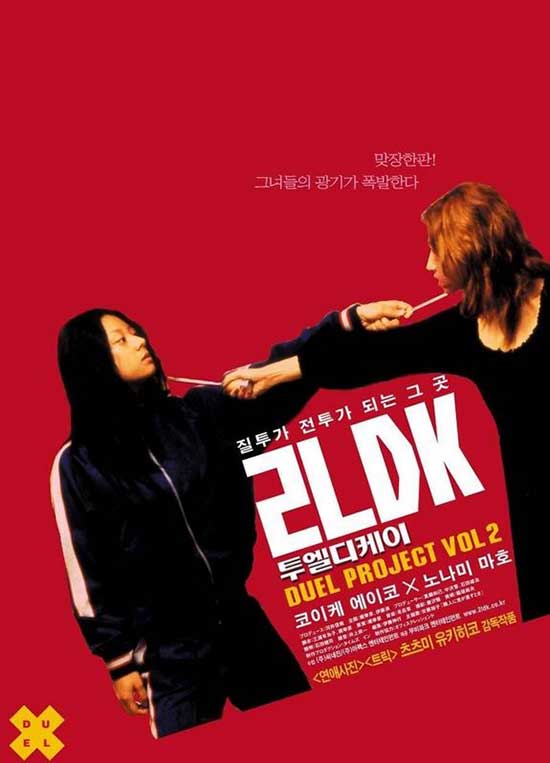 What also makes this conflict interesting is that its not just violent acts but more female-orientated conniving to hurt the other emotionally as well. Just about the time we think they’ll give in, another surprise gets thrown at us. This movie is meant to be conveyed in a fun and brutal way, so my sugesstion is to tackle it under that notion. Maybe it’s the idea that what they act out is comparable to how we all fantasize about doing to others subconsciously here and there? Like I said, I’ve seen it a few times and enjoyed it each round. It’s bitch-slappin, chainsawing weilding, electrofying good sh*t.

Watch this film with a sense of horror, ludicracy, and lack of seriousness and it will work out just fine. Oh by the way, what’s a chainsaw doing laying around in 2 starving artists apartment?