Horror Funding: ANGEL OF DARKNESS: The Legend of Lillith 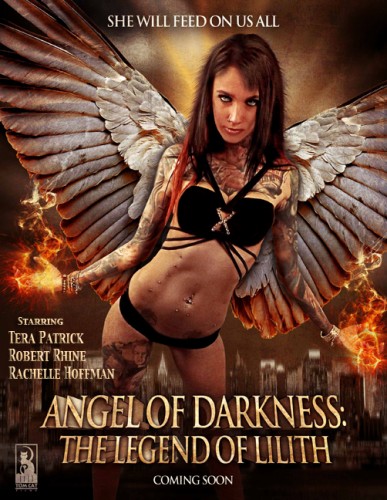 Iconic adult star Tera Patrick is going mainstream in her second horror film, Angel Of Darkness” The Legend of Lillith. “More and more adult stars are making the transition to mainstream films and mostly horror,” explains Robert “Corpsy” Rhine, who is also the Publisher of Girls and Corpses Magazine adding,” Tera Patrick is a name that people know are interested in for producing horror films.”

TomCat Films is headed by sales and distribution veteran Ted Chalmers. He has been involved with the sales and distribution of such well-known films as THE TEXAS CHAINSAW MASSACRE, TEXAS CHAINSAW MASSACRE: THE NEXT GENERATION, HELLRAISER, ESCAPE FROM NEW YORK, ONE FALSE MOVE, RE-ANIMATOR, BRIDE OF RE-ANIMATOR, SOCIETY and EVIL DEAD 2. Chalmers cast Patrick, Rhine and Hoffman and is going the Kickstarter route for additional financing. “The film is already financed and we have distribution but we are looking for some additional funds for special effects,” explains Ted Chalmers, CEO of TomCat Films: tomcatfilmsllc.com/

Tera Patrick plays Mistress Selene: the assistant to Master Diablo (Rhine). The iconic and beautiful ex-adult star has a massive fan base. As the role of Selene, is she a flunky, the power behind the man, or maybe the puppet master? Tera Patrick’s Indonesian non-p*rnographic horror movie, Rintihan Kuntilanak Perawan (Moaning of Virgin Ghost) was Patrick’s first foray into horror. Patrick’s best selling memoir Sinner Takes All, was published by Penguin imprint Gotham Books

Robert “Corpsy” Rhine (Publisher/ “Deaditor-In-Chief” of Girls and Corpses Magazine) is excited to be playing the role of ‘Diablo’ in Angel of Darkness, “I am truly excited to be working again with TomCat Films following my roles in: Nazi Dawn, Snake Club: Revenge of The Snake Woman, Disaster Wars and Dracula’s Sorority Sisters. Angel of Darkness is a killer script!”

Rachelle Nicole Hoffman (plays Lillith) is a Tattoo Model, and Piercing Artist from Phoenix Arizona. You might have seen her in Off Da Chain, Tattoo Flash or Pain Magazine. She is also the owner and operator of Ritual Addictions Tattoo in Glendale, Arizona.

David Ayres (FX Makeup) Credits: Close Encounters of the Third Kind, The Hills Have Eyes (1977), Tourist Trap, Empire of Ants, and Suture. He was the maker of the iconic Halloween mask for Michael Myers. Watch this video history: www.kickstarter.com/projects/tomcatfilms/angel-of-darkness-the-legend-of-lilith/posts/576199