The Legend of Six Fingers Takes Hold with Final Wrap

Qualiana and Elias portray two amateur filmmakers documenting a string of animal slaughters in rural Royalton.  They interview a farm couple (Lowry and newcomer Bill Brown) who tell them the Native American legend of “Ya Yahk Osnuhsa,” an apelike creature with three fingers on each hand.  Generations ago, “Six Fingers” stalked settlers who invaded his land, until one settler agreed to keep people off the creature’s territory and to make animal offerings.  The filmmakers set out to prove that Six Fingers exists and is responsible for the animal slayings, with terrifying results.

“We wrapped principle photography in just thirteen days,” says Qualiana, who shot the film in character.  “I give credit to my cast and small crew for being on the ball each shoot day. I’ve been editing the film during down time, and I’m proud of what we have.  People will laugh when they see the finished film, they’re going to sympathize with these characters and still get that taste of horror and gore.  The monster is going to blow you away.  We worked really hard to make this something fun.” 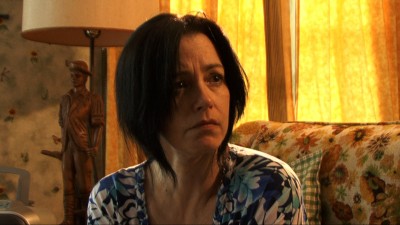 “This was a real smooth shoot,” adds Lamberson.  “We came in on budget and ahead of schedule.  We put together a solid cast and crew, and in the last year most of us have had a hand in Model Hunger, Return to Nuke ‘Em High, Battledogs, Dry Bones and now The Legend of Six Fingers  We’re trying to make Buffalo-Niagara the indie horror capital of the country, with smart movies made by hardworking, talented people.”

The Legend of Six Fingers will have its world premiere in Buffalo on September 26th, and a distribution deal will be announced soon.

Tags The Legend of Six Fingers