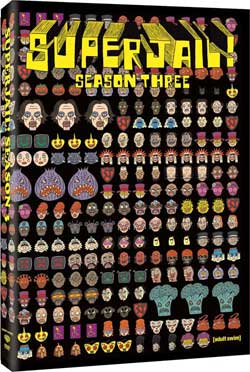 In a surreal world, a large maximum security prison, which houses thousands of dangerous inmates is run by an eccentric warden and his equally odd staff.

As this Adult swim series arrived promptly at my house, I took note that this season 3 was to be my first introduction to this series. After all, I love crazy cartoons especially those with some level of adult driven humor. “Superjail” is the name of the series which take us thru the events that occur at an extremely odd and bizarrely chaotic prison. You might also jot down that the series while completely ludicrous is an “black comedy” file with more chaotic visions that the entire lifetime of Frank Zappa come up with. 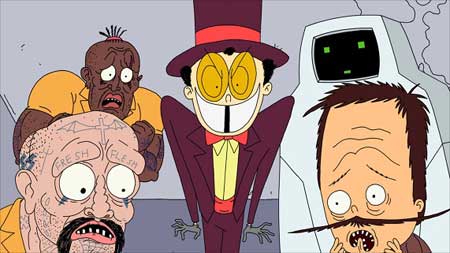 Yes, season 3 marked my change from a TV newbie into full fledged “Superjail” viewer. This series which I’m guessing comes on quite late, has alluded me for its first 2 seasons but now in full DVD collective form, I get a solid viewing of the entire 3rd.

Moving on, “Superjail” is complete udder madness that threw me for a loop as to how and under what state the animators came to creating each episode. I mean cartoons have gotten pretty weird with shows for kids like “Adventure Time”, but this one tops the cake with so many moving parts including carnage, violence, burnings, destruction, and masses of characters getting assassinated that my head was spinning after episode 1. 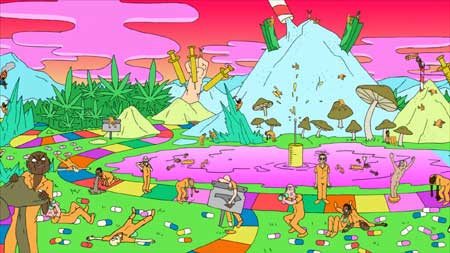 I tried my best to get the full gist here (even with watching the entire season) and am not entirely sure I did. Each episode begins with some form of chaotic crime event in progress, which is quickly plucked from its scene and taken off across lands to arrive at the distant location of the “Superjail”. This also marks the custom intro for each episode.

Now in research, it appears that “Superjail” is located under a volcano located inside of a larger volcano. The prison is under the command of a completely insane warden who seems to rule the jail in an altered state of reality commanding his own set of superpowers. From here there seems to be a storyline trying to pull thru only to be interrupted by a flash of surrealism and carnage-driven psychotics. 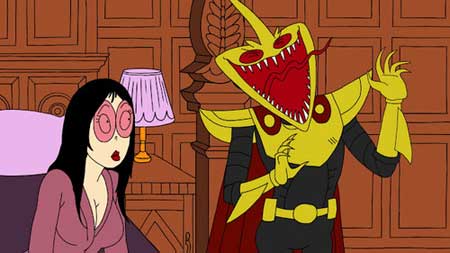 From what I could gather the primary characters are: The Warden, Jared, Alice, Jailbot, The Doctor, Jackknife, The Doctor, Lord Stingray and the Mistress. Each episode features whoever is up for that particular episode and tries to pull in a background to the insanity. Episodes vary with life inside the prison to focal themes such as takeovers, magic shows, fighting and character development scenarios. 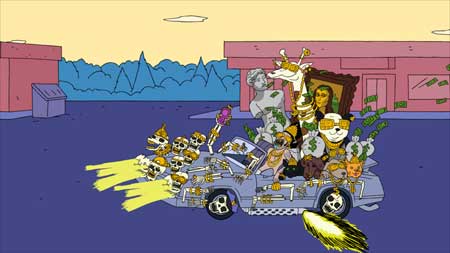 My takeaway? Man this is a must own if not for an extreme conversation piece. As my friends talk about how weird cartoons have gotten, I knowI can dupe them all by laying down some “Superjail”. I will say from trying to run thru the whole season that the visuals “can” wear you down. It’s sort of like a carnival ride that went by too fast to really get the full gist, however, even with that, their is vibrant brilliance within, and I’m going to stick with that as a takeaway

Inventive, bizarre, violent and imaginative, “superjail is the bomb! 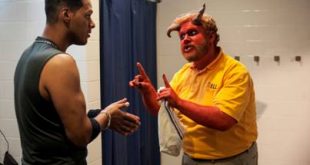 Hell is Hiring! – Your Pretty Face is Going to Hell on Adult Swim 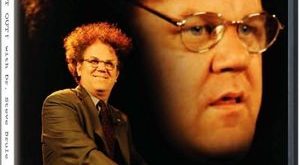