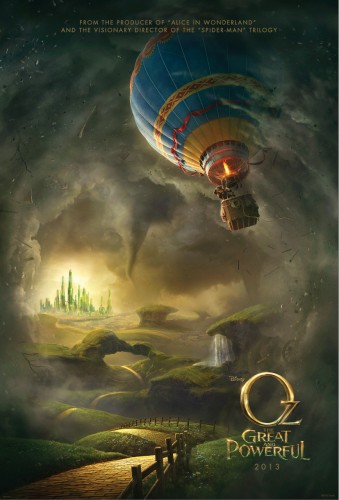 A small-time magician arrives in an enchanted land and is forced to decide if he will be a good man or a great one.

Why oh why did Hollywood decide that a prequel to “The Wizard Of Oz” (1939) was necessary? We got more than a few sequels already (1985’s “RETURN TO OZ” being the most egregious of the lot), a remake of sorts (1978’s “THE WIZ”) & a slew of animated features that acted as either straight up remakes or sequels but absolutely none of them lived up to the original productions glorious sense of actually being transported to the land of Oz like the original. Much like the tin man they all lacked heart. 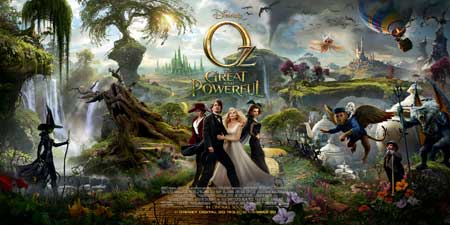 Sam Raimi’s “Oz the Great & Powerful” means to explain to us the reason that a small time carny magician (James Franco) who just happens to be named Oz (His nickname actually) ends up in the magical kingdom & how he ended up as it’s leader, it’s wizard.Of course we discover that Oz fancies himself something of a ladies man first and his carousing eventually gets him in trouble with the carnivals strongman who doesn’t appreciate the fact that Oz has been messing with his woman. One escape via hot air balloon mixed with a really angry looking tornado later…he lands in a river located in the land of Oz. Just happy to be alive & not really comprehending where he is just yet, Oz meets Theodora (Mila Kunis) who immediately takes him to be the wizard of legend, the one who will rescue the population of Oz from the grip of the wicked witch Glinda (Michelle Williams). Except Glinda is the good witch & in fact the true wicked witch is Theo’s sister Evanora (Rachel Weisz) but she’s plotting to transform Theo into a literal “Wicked Witch” & use her to subjugate the army that they fear Oz & Glinda will form to defeat them. Whew…this is getting complicated. 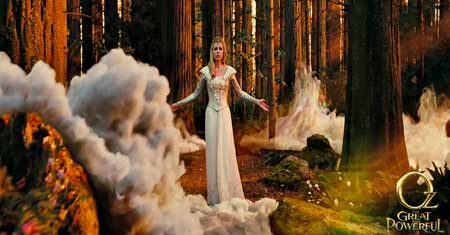 Except Oz isn’t really all that much of a wizard & was lured (By Evanora) into accepting the job of killing Glinda with the promise of riches beyond his wildest dreams. It all has something to do with breaking her wand but if was really that easy why couldn’t someone else do it? In his journey Oz befriends a flying monkey named Finley (Zach Braff) & a small girl made of porcelain china named China Girl (Joey King) and the three of them team up with the citizens of Oz to defeat the wicked witch & her army of ax wielding soldiers & vicious flying baboons. It all ends with a conflagration of fireworks & images projected onto smoke & mirrors in order to trick the wicked witch into believing that Oz is a whole lot mightier than she thought. 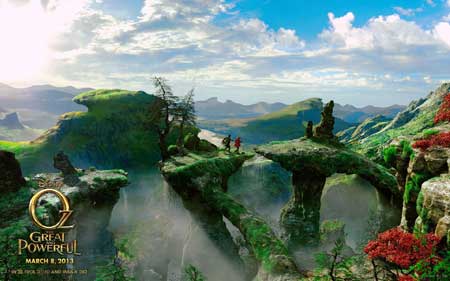 OK, my first bone of contention is with the messy script. It’s far too complicated for anyone younger than 10 or so to understand. Characters are double & triple crossed throughout and if I went onto this film expecting a spy caper I would get it but we’re in the magical land of Oz people, not in the village with Patrick McGoohan being chased around by a big white ball. I’m no genius but I was confused after awhile and I’m sure the children who were in the audience I saw it with gave up after the first 40 minutes as well. 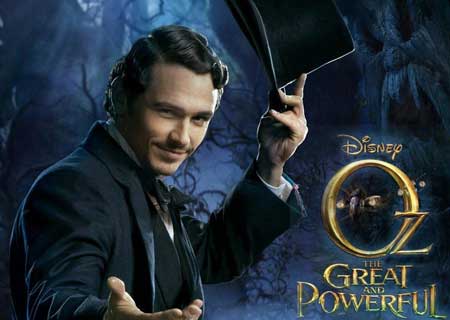 My second bone of contention is with the casting of Franco in the titular role. Don’t get me wrong, I like the guy. He’s a fine actor & has given some excellent performances in the past, I just think he’s miscast here. He has this smarmy, pervy leer that he uses in place of a smile that’s really creepy & off putting. It doesn’t help matters much when his character is portrayed as a user & a womanizer as the film opens either. It isn’t until the final 20 minutes of the film where he becomes likable to a degree and by that point I didn’t much care if he was good or bad. The triumvirate of ladies in the roles of the good, bad & wicked witches fare better though. Williams underplays Glinda but she does it well with good just beaming off of her whenever she’s onscreen. Weisz gives away her character’s arc way too quickly and not because of the script, she just looks sneaky as soon as she appears yet she manages to make the audience care about her for awhile. Kunis has an ethereal beauty that serves her character well. Her large, expressive eyes say so much and she knows how to use them to give the audience a sense of her innocence & naivete. She undergoes a transformation later in the film that might scare some of the younger folk but even under all of that makeup she’s wearing, she’s kind of cute. 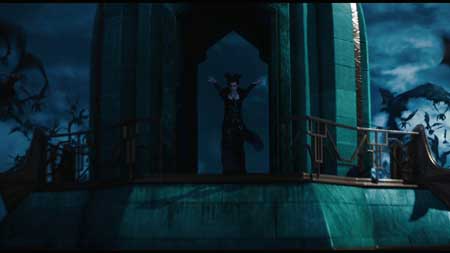 The third problem I had here was the way everything looked so gosh darn pretty! Let me just state for the record that I think this film is one of the most gorgeous ones I’ve seen in the last decade. The colors just bounce off the screen with some of the most ingenious use of 3D that I’ve ever seen. It’s all so bright & colorful (Save for the B & W prologue of the film) that I felt dizzy a few times. But while it’s all wonderful for awhile eventually I couldn’t help but see how fake it all looked. I understand that it’s a fantasy & it’s not supposed to look real but “OZ…” really began to look cheesy as it continued with some horribly obvious front/rear screen projection & CGI that became obtrusive all too quickly. That being said Finley & (Especially) China Girl are beautifully created characters that overcame some of the less convincing images they’re surrounded by. 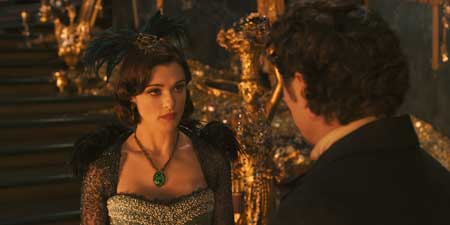 Lastly (& this is a problem I’ve been having a lot lately) is the film’s excessive running time. 130 minutes is actually pretty short compared to some other mega budgeted films of late but it’s still too long when the film is being aimed at children & the narrative is as complicated as this one is. It’s as if Hollywood feels that films running 145 minutes or longer justifies the expense of making them but that ain’t always the case…especially if it’s boring for most of it’s running time (I’m talking to you “Jack the Giant Slayer”). Yong kids aren’t gonna sit still while Franco makes googoo eyes at Kunis or Weisz…or Williams….or practically every female character of the cast. 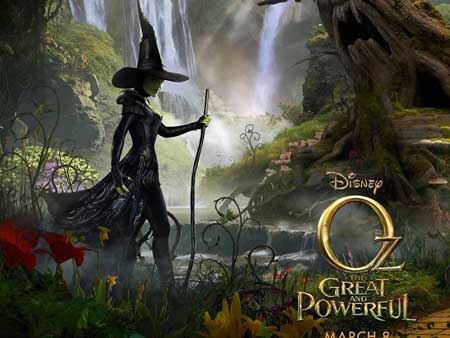 I also thought one character looked way too much like a Deadite from “Army Of Darkness” to be coincidence as well as some “River Fairies” that looked a lot like the “Tooth Fairies” of “Hellboy 2” so Raimi might’ve been a bit lazy in that aspect but then again perhaps he was just giving a wink & a nod to the nerds in the audience (I’m one of them). There is the prerequisite Bruce Campbell cameo to look for(Blink & you’ll miss him though) & “Evil Dead” starlet Ellen Sandweiss is also hiding in here somewhere to boot. 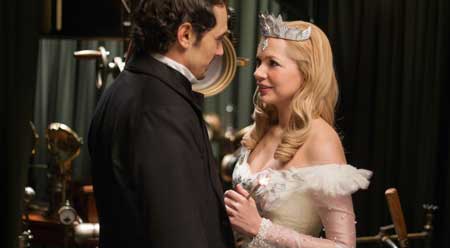 Overall I didn’t hate “Oz the Great & Powerful” (Though I hate the title). I just didn’t find it very compelling & it’s complicated script (By Mitchell Kapner & David Lindsay-Abaire) made some of it a slog to get through. But in the end it’s visuals made it worthwhile despite their ever escalating cheesiness. And like I said earlier, the 3D effects are out of this world so it’s not a complete wash. If you have a patient tyke (Do they even exist?) then he/she might have fun with this one. Otherwise go on your own & grumble at all of the parents whose kids are screaming from boredom.