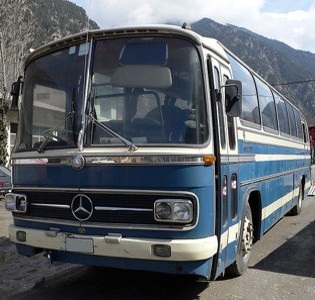 So we, the team of Transylvania Live-expert in Transylvania, invite everybody in a fascinating holiday: Vampire in Transylvania-Dracula Short break – The Kiss of the Vampire special edition departing June 11 2013! As everybody can imagine Transylvania is all about stunning scenery, terrific places to be seen. Transylvania and the Carpathian mountains are the very best parts of Romania.

Alin, the guide said: “We like very much Kiss of a Vampire, the third movie in Dracula series (which began with the classic British Dracula with Christopher Lee) and was followed by The Brides of Dracula, because this is about a couple, Gerald and Marianne Harcourt, traveling together in their car, on their honeymoon and having adventures.
When you think “what the reason is for peoples to be attracted by the vampires” it has to be said that this could be the romantic idea of eternal love.
Every lover wants his love to be forever. Being mortals, of course, there is a chance, that this cannot be true. Except if we could be vampires. Then our love can travel over the centuries.

Isn’t this an romantic idea? We decided now to organize this special edition of Vampire in Transylvania. We are targeting couples and we are preparing a cozy atmosphere using a vintage bus as a way of transportation and unique happenings to color the days.

We are guiding our tours with a lot of fun.
We put our travelers to swear that they never tell to others all the secrets that we will tell them during the tour.

We create some “hidden traps” for tourists during this tour, for example, we will suggest them to volunteer to collect the web spider for Mr Muresan in order to be allowed to visit his web spider painting exhibition in the dungeons of the medieval Saxon citadel of Medias. Mr Muresan is 83 years old and is a unique artist, the only one who uses spider web for his paintings. He is full of energy and he began his unique passion at the age of 75 in order to realize something new in his live. Isn’t he an example for everyone of us?

If you have seen the movie Kiss of a Vampire you are aware about the fact that the young couple, from the movie, has some problems with the car. And this is the beginning of their adventure. Tour goers will see if our car will reserve them any surprise. So let’s talk about our car and see that we will try to make efforts to maximize the chances for our adventures to begin! 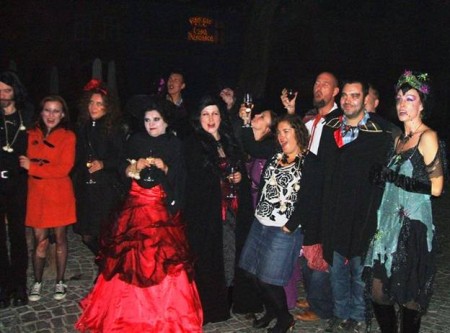 The vintage Bus
Made in Iran in the late ’60 and imported in Romania the old Iran National coach, produced under a Mercedes license in Iran, before the Islamic revolution, help us create a special atmosphere. ( Did I mentioned the gypsy driver? Mr Nelu aka Gaddafy?)

Iran National Company used to be the first car producer from Iran, the factory being fully functional in 1962. During the ‘ 70, immediately after the communist dictator Ceausescu came to power, Romania imported 250 buses from Iran, all the buses has arrived in the country with Romanian drivers coming all the way traveling from Asia on their own wheels.
They were the main way of moving around the country for tourists during Ceausescu dictatorship, and it was his initiative for modernizing national tourism.

Since Ceausescu’s rule encompassed Transylvania, anticommunist protesters often portrayed him as a vampire. One such caricature appeared in The London Times at that time. 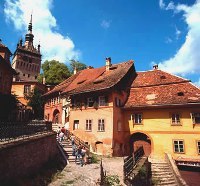 The unusual “usual tours”
Beside the above mentioned, that we offer only for the special edition “Kiss of a Vampire” there are special events experienced by participants in any “Vampire in Transylvania” tour:
Killing of the Living Dead ritual – Helping a haunted spirit to gain his peace – attending the ritual of killing a vampire, a reenactment performed according with old burial tradition in Romania. This event was featured on Travel Channel.

During masquerade party in Sighisoara citadel, Dracula’s birthplace a Survivor’s Certificate will be handed over

The price for this incredible short break depart from £ 490.
www.visit-transylvania.co.uk/romania-travel-transylvania/dracula-tour-vampire-tour.html

The vintage biplane experience over Dracula’s Castle
Participants can fly without c**kpit. They will put on a vintage leather helmet and vintage goggles and experience the thrills of the beginning of the aviation. We will give you a ride you will never forget. A fantastic opportunity to see the splendor and beauty of Bran Castle, also called Dracula Castle, the old Rasnov Citadel and the picturesque Brasov city from a bird’s eye view.

The ride will last for approximately 20 minutes – effective flight time. The vintage biplane is a replica and we have an experienced pilot instructor.
Price for this optional experience is £ 99.
This is an option available for tour goers and it is not included in the price of the Transylvanian short break.

Dracula hotel
Some of our previous guests named this hotel “a medieval fantasy with beds”. There is good cuisine here and maybe you should try the Vampire Masculinity so you will know it is worth killing for a meal. We offer the option to accommodate in a Dracula themed hotel before or after the tour.

Flights from London
Luton available at £ 135 for a round trip, departing Tuesday, June 11 at 08.30 with a return flight Friday morning with wizzair.com.

About The Kiss of the Vampire
the classic British movie: Originally intended to be the third movie in Dracula series (which began with the classic British Dracula with Christopher Lee) and was followed by The Brides of Dracula; it was another attempt by Hammer Film Production to make a Dracula sequel. In the United States, the film was retitled Horror of Dracula to avoid confusion with the 1931 film Dracula starring Romanian born Bela Lugosi.
en.wikipedia.org/wiki/The_Kiss_of_the_Vampire

About Dracula:
The vampires caricatured for films, best-selling novels, cereal boxes and even “Sesame Street” all descended from Vlad III Draculea, a Romanian prince who reigned in the 15th century. The prince earned the nickname “Vlad the Impaler” for the merciless ruler’s gruesome method of doing away with enemies. His given surname, Anglicized as “Dracula,” is derived from the word meaning either “dragon” or “demon” in his native tongue. Irish writer Bram Stoker drew inspiration from Vlad the Impaler for his novel “Dracula,” published in 1897.

About Dark Tourism
The Roman gladiatorial games, pilgrimages or attendance at medieval public executions were, for example, early forms of dark tourism whilst, as Boorstin (1964) alleges, the first guided tour in England was a train trip to witness the hanging of two murderers. (Bodyworlds 2006). Boorstin, D. 1964 The Image: A Guide to Pseudo-Events in America. New York: Harper &Row. The Dracula Tours are a category of Dark Tourism defines as cultural tours that provide the opportunity to visit places related to Dracula, the fictional character from Dracula novel by Bram Stoker (Transylvania, Whitby, London) and Vlad Tepes, the historic character that inspired Stoker to write his book.

About Transylvania Live-Expert in Transylvania: Founded in 1995 the tour operator, specialized in very innovative Dracula themed tours in Transylvania, is one of the few that understands the Western market for Dracula. For many Romanians Dracula means Vlad Tepes but for people from the UK, America etc. it means of course the vampire Dracula. Here’s how Professor Duncan Light from Liverpool Hope University, specialized in Dark Tourism describes them: I agree with those people who say that Dracula is a way to get foreign tourists into Romania creating an opportunity to show them all the other things the country can offer. Transylvania Live’s Dracula Tours were placed by the prestigious Fodor’s Travel Guide in Top Ten Must-Do Adventures. Important worldwide media organizations, such as Travel Channel, took an interest in the special events from their tours.

Tags The Kiss of the Vampire 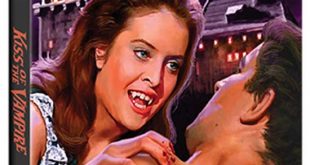