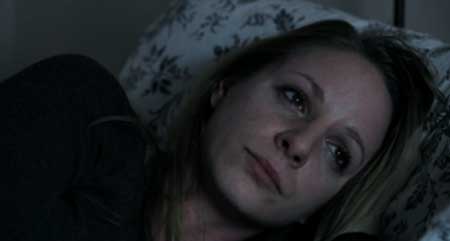 This short film manages to be unsettling in a way that is not easily accomplished. It is built up slowly (despite lasting only around seven minutes) and is very subtly done. There’s that wonderful sense of eeriness from beginning to end, which I thought worked a treat. The horror here is more ‘emotional’ and does in fact touch upon a few issues that are a very real part of life – like the challenges of being a first-time mother and the depression that can follow that. In a sense, this type of horror works better simply because of its authenticity, and for that reason, I definitely rate The Cleansing up there with the best of them (despite not appearing that traditional in terms of horror).

Whilst watching The Cleansing, I was actually reminded of Gore Verbinski’s remake of The Ring. This is due to its ‘moody’ colour palette and the use of abstract shots to help illustrate the psyche of the main character. I loved the fast inter-cuts of water and bubbles, coupled with the sounds of a baby crying used throughout, because it really puts the audience into the mindset of the mother. She constantly dwells on these things, it is relentless inside her head, and therefore, the viewers must become inflicted with this obsession also. I suppose the actual topic that was being explored was more closely related to The Unborn, and how babies/children can actually have a huge impact on adults. It’s a tricky job, 24/7, and it is conceivable that someone can just snap one day.

Without giving away exactly what happens, I think it’s safe to say that the mother in The Cleansing has reached the end of her tether with her parental ‘duties’. It is not until near the finale that we discover the reality of the situation, but we are given hints consistently to help us put the pieces in place. It allows time for the audience to figure things out for themselves, without having to be explicitly told everything from the start. This gives the viewer a bigger sense of satisfaction at having ‘worked it out’ for themselves. A scene that I particularly loved was when we have the ‘metaphor’ of the mother making a sandwich for the little girl, whilst there are several ‘flashes’ back to what we really know she is thinking about. It is exactly moments like this which highlight the sophistication of The Cleansing and how it encourages the audience to engage with what they’re seeing through the use of imagery.

Overall, although The Cleansing isn’t at all full of action and general horrific mayhem, it harks back to the classic Japanese horror films which rely mainly on creating atmosphere to scare the audience. By this I mean that it is restrained in a good way, slowly drawing the viewer in to this chilling tale. Don’t fight it, just sit back and enjoy.