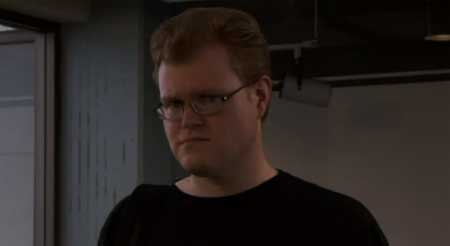 Mike moves into a new dorm room and finds something strange whispering to him at night in his closet. What is it and how far will Mike go to learn it’s secret?

Now short films don’t come much more D.I.Y than Whisper does, and I mean that entirely in a good way. The filming took place in director Bryan Wolford’s apartment (shooting for 17 straight hours on a Saturday and 9 on the Sunday) and even Bryan’s girlfriend did a lot of the boom mic operating for the film (managing to get the song ‘Smooth Operator’, though changing the words to ‘Boom Operator’, into everyone’s heads). In fact, on Bryan Wolford’s blog page he goes into a lot of depth about the production of Whisper, to any film buffs out there who are interested in the process behind the scenes. Bryan Wolford said that he came up with the story for Whisper in an online poker session on the game Red Dead Redemption, stating “We were just talking about random stuff and my friend Mat from Deadlantern.com told us this story about a guy moving into a dorm room and he kept hearing whispering at night.” This really got in his head that night, and thus, Whisper was born…

Although I believe that Bryan Wolford is something of a hero, with his absolute dedication to anything and everything horror related, I wasn’t really taken by his latest film Whisper. There wasn’t really an atmosphere or a storyline that had anything interesting and fresh to offer audiences. I personally feel that a lot of the scenes dragged, to be honest. There were a lot of intense looks at inanimate objects which wasn’t terribly exciting to watch – they key with short films is to make it quick and snappy. Time is limited, after all.

I’m not sure I like the choice of background music, although I do really love a bit of rock music. I believe just playing the song at the start would have sufficed. I see no reason for such similar music (if not the same band!) to be played throughout the whole of Whisper, I feel like that is slightly excessive. And the little ‘story’ midway through about how something terrible happened in that very same apartment years ago was kind of trite. There must be a more interesting reason behind some supernatural, ghostly beings causing havoc than just a past frustrated student. It just seemed like too easy an option for my liking, but I suppose short films don’t have the luxury of complex back-stories like feature length movies do.
Despite my criticisms, Whisper was actually nominated for a Rondo Hatton Award (for those who are unaware, Rondo Hatton was an iconic actor from the 1940s) in the category of Best Short Film – some consider this award to be a special one in the world of horror as it is actually chosen by the fans!