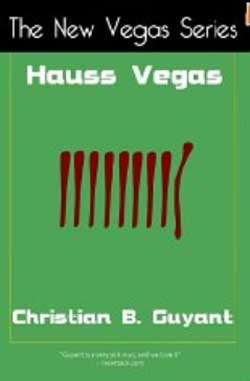 Of the last four books I’ve reviewed, three have been about zombies in some way. It’s a craze that has lead to mountains of great literature and doesn’t look to be letting up any time soon. Unfortunately, this also means that it’s becoming increasingly difficult to write fresh zombie material when there are already hundreds of other authors doing the same. Rather than picking up a promising book and having a good time with it, people are finding each new piece of zombie literature to be the same stale reworkings that they’ve already read a few times before.

In the first novella of his upcoming “New Vegas” series, author Christian Guyant hopes to deviate away from the norm and create a zombie series unique from the rest. Set, obviously, in and around Las Vegas, this quick 149 page read can be taken in easily in one setting and gives the reader plenty of bloody action to look forward to.

The difference in most zombie novels and that of Mr. Guyant’s is the style of zombie itself; as the author himself puts it, “Other than speech, an infected person retains all of their abilities including motor skills and the ability to use tools and think critically. This is also set in the modern world, and unlike most zombie stories, these people are educated on what zombies are. Let’s face it, with how big zombies are in pop culture, if there was an outbreak we would already have some preconceived ideas.”

The idea that the zombies as well as the survivors will utilize tools around them makes for some very interesting scenes throughout the novella. Although I don’t want to spoil anything that happens, I will say that the scene where our veteran zombie slayer almost gets taken down by a can of mace and a five year old is one of the most humorous zombie attacks that I’ve read about in years.

Make no mistake though, while there may be smatterings of humor throughout, this is no lighthearted tale. Violence and foul language abound in this quick but entertaining read, with decapitations, slit throats, and blood galore.

I’m not sure if this is Mr. Guyant’s very first fictional piece, but it doesn’t seem to be. While there are the typical grammatical issues here and there that one expects from an ebook, the novella as a whole is very sound and doesn’t offer much to be critical of. At times, it seems just average, something the reader would read but wouldn’t hold dear to you afterwards, but then scenes like the one above happen and it makes the reader really anticipate the next novella in the series.

It should be noted that Mr. Guyant hasn’t just wrote a novella about the zombie monster; he has also created a human monster, a man obsessed with his kill count who goes to extremes in creativity. I won’t say any more, but I found him to be a very unwholesome character and while I didn’t care for him at all, I still waited in anticipation to see what he would do next.

Overall, it’s a fairly good read, quick enough to get through in one sitting but engaging enough to want more when it’s finished. Even at just 149 pages, this one is better than some zombie novels I’ve read that topped 300 pages, and for only a dollar it will offer quite a bit of enjoyment and entertainment.