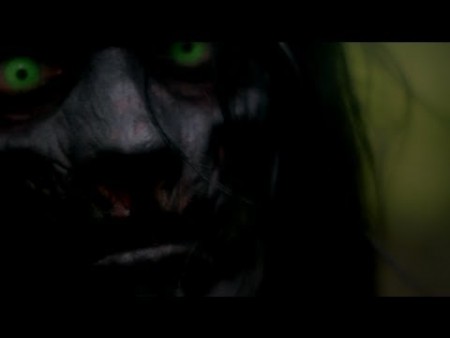 This short film reminded me very much of a cross between Stand By Me (due to the main characters being a group of young boys who play around the countryside, albeit with slightly more sinister consequences) and The Blair Witch Project (due to the handheld camera movements and the fact that the story revolves around trying to find a lost friend in the woods, encountering strange, supernatural phenomenon in the process). The story is a little worn-out for me, and doesn’t really offer anything original to the horror genre.

Overall, I really didn’t think that the sound worked at all for Into The Woods. The background noise of the wind and leaves crunching were just much louder than they needed to be – whether this was intentional or not doesn’t excuse it! This acts as a distraction to the main dialogue and could easily have been rectified with better quality recording equipment. I also rather detested the music that was used at certain points to evoke a sense of foreboding in the viewer. This was too crunchy and ‘synth-y’ (for lack of a better word) and didn’t feel appropriate at all.

Into The Woods was written by Matt Naylor and David Wilson (of Downpour Creative Productions) and they have stated online that the kids have no acting experience (well…that’s obvious!) and that the crew has very little experience. This I can also understand, as some of the shots are questionable, but I did like the use of soft focus throughout and felt that this was utilised very effectively. I’m curious about the choice to never show the mum’s face – was this chosen because of some deep narrative plot-point about the stereotypical role of the ‘woman’ in the household, a faceless, non-person who simply cooks tea and washes the dishes, or was this just because the woman did not want to show her face?

For all of its attempts at being ‘scary’, this failed most of the time –although I must confess that I did jump once, but that was simply because of a sudden jolt (such a cheap trick)! The laughable ‘scary’ voice that was used for the devil was so typically cheesy that I had to refrain from giggling hysterically. It reminded me of the clichéd ‘trailer’ voice that is used excessively to advertise movies, the deep, gravely ‘important’ sounding voice. As for the visuals of the devil, it looked to me like an orc that had Jedi mind powers, and whilst this saved money on the special effects (by just getting the kids to hurl themselves randomly about) it does not appear scary at all! I’m awfully sorry.

The ending (or lack of) really was appalling and needs a big re-think. The audience is left hanging in the breeze, as it were, and this offers them no satisfaction whatsoever. This is a real shame because it leaves a general bad impression of Into The Woods, perhaps I am being too harsh on it, considering that it is an independent, low budget number but it really didn’t hit any of the marks as far as I am concerned.