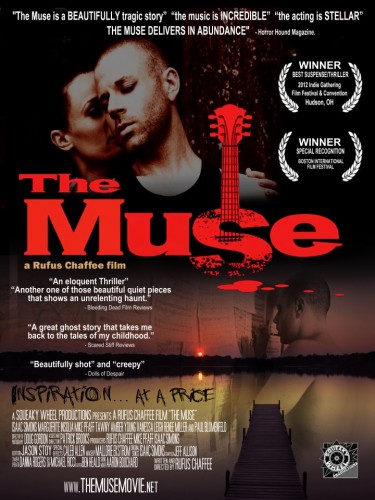 A one-hit-wonder musician battles writers block and a strange inspirational force at a secluded lake house.

This film had an interesting concept and played with the idea of a ‘traditional’ ghost story rather well. The ‘ghost’ sub-genre dates back many, many years and for that reason it is hard to come up with something that audiences haven’t seen before. There are the standard clichés present here, of course, like doors mysteriously closing by themselves and objects appearing in random places, but the actual role of the ghost and the way that it interacts with the main character is something quite different from anything I’ve seen before – and for that, I respect it. However, the plot began to unravel and became a bit too crazy and nonsensical towards the middle unfortunately. Director, writer and producer of The Muse (Rufus Chaffee) is still relatively new to the industry and although this film had many flaws, it is a promising start to a career as a horror movie director.

Pretty much carried by one person, The Muse begins by introducing us to Addison Taylor (played by Isaac Simons) – a musician who’s had one big hit (‘F**k You Like A P**n Star’) and is receiving pressure from his agent (as well as the general public) to write some new, awesome material. The problem here is that Addison does not feel like he can live up to the success of his first catchy number and has developed a dependency on drugs (well, that’s a new one!). He ends up heeding a suggestion by his agent about taking a holiday alone to an empty summer house in order to really focus on writing music and ‘finding himself’. However, once there, a mysterious ghostly entity begins to interfere and gets desperate for her music to be heard.

A line of dialogue from the film states that ‘music is immortal’ and so this is taken in a very literal sense in The Muse, as she aids Addison in writing but demands an ever higher price for the musical gems she produces for him. The first section of The Muse doesn’t seem to be a horror movie at all, which at first began to confuse me. This is a theme which ran on pretty much throughout, as I felt that there was absolutely no tension whatsoever, which is a real shame. Some attempts were made to have some ‘creepy’ music playing in the background but this was rather pathetic and didn’t evoke any fear in me at all. Trying to place fear with something that simply isn’t scary is never a good move. The scenes where the ghostly woman is present could have been made so much better with a bit of mood lighting, suitable background music and just better visuals for her character. Hardly any special effects were used, and whilst I don’t think this is a necessity, The Muse would have greatly benefited from some good old fashioned special effects. The whole eerie thing about the supernatural is that they don’t have to abide by the laws of nature, and so why not use this to their advantage. Make the muse scary, super scary, because the audience wants to be scared!

There were elements of a ‘haunted house’ scenario in this film, and I knew as soon as I saw an isolated dwelling in the middle of the forest, that no good can come of it. But who doesn’t love the good old ‘cabin in the woods’ type of movie? Even if it is screamingly obvious. The cinematography was actually very well done here and there were a fair amount of bold shots used – clearly the director knows what he’s doing in that department. The way that ‘the muse’ was shown, kind of reminded me of Japanese horror films, with inexplicable limbs reaching out and stroking Addison when he’s playing the guitar. Japanese horror movies have always focused more on the ‘ghost’ side of things, simply because their culture is more superstitious, whereas Western audiences seem to prefer more blood and gore. (Obviously, I’m generalising here!). I think that it’s safe to say that The Muse concentrates more on trying to disturb the viewer as opposed to out and out paralytic fear. There’s no harm in this (some of the best ‘horror’ films have done much the same thing – The Shining or Rosemary’s Baby), and there are a couple of violent moments to raise the stakes a little.

Honestly, my interest in this film seriously declined towards the end. Although there was a brief moment where things seemed to be ‘kicking off’ as it were, the plot then decided to go off at a weird tangent with minimal (to no) explanation. Things were too chaotic, there was no real flow from start to finish and the ‘atmosphere’ was practically nonexistent. The Muse is far from fantastic, but it is always nice to see a film which tells a slightly more refreshing tale than the same recycled stuff that’s been doing the rounds for decades. It’s a good idea, but the story development just needed to be tightened up – better luck next time Rufus Chaffee.