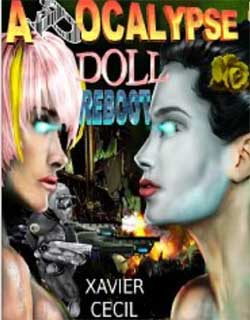 Apocalypse Doll Reboot
Author: Xavier Cecil
Buy from: Amazon.com (Kindle edition) for $3.99 or paperback for $10.50
A Pop Star,
A Geisha,

And a nation of zombies. It turns out the Zombie Apocalypse was caused by the Robot Apocalypse, and a high-tech mountain stronghold of besieged survivors fights a losing war against a planet-spanning, robotic intelligence with a ruthless agenda leaving no room for human civilization. Zombie-hunters overwhelmed by oceans of the Living Dead are driven to a desperate gamble to turn the tide: To weaponize a series of robot humanoids –

A new kind of A.I. conscripted to fight a war they were never built for – not only against the robotic masterminds of a zombie plague, but also against a prejudiced humanity with reason to fear all intelligent robots.

It’s an epic novel, touching on sci-fi issues of A.I., robot ethics, all in a zombie-shredded package.

Above is the description I was originally given when asked to review Mr. Cecil’s second novel. Although I had not read the first, I gladly accepted the opportunity almost solely out of sheer curiosity; a meshing of so many possible science fiction and horror components into one would have great potential if put into competent hands. The question then is this: were Xavier Cecil’s hand capable of delivering a masterpiece?

The answer, sadly, is no. The next great sci-fi horror, it is not. In fact, I would be hard pressed to call this horror at all, with the exception of the zombies. That is not to say that the book is all together terrible though. The writing is fairly good for the most part and at times Mr. Cecil’s genius really shines through, such as in the following passage: “She unfurled the Kimono draped over one arm. The faded colors soon repainted themselves as the memory fabric recovered from the harsh thermal decon. A yellow rose interwoven within the whorls and loops of raven-black hair piled atop her head was drooping, but the press of a small, green button beneath the blossom caused the synthetic flower to firm up again.”

However, the ebook is severely marred by consistent and repetitive grammatical errors, a problem that seems to be a staple of self-published ebooks in general. I found the lack of a good editor to be this novel’s final nail in the coffin. Should Mr. Cecil choose to have someone go through with a fine toothed comb and correct the multitude of errors present, this would certainly be an engaging piece of literature. It has all the markings of popular reading; it includes zombies, robot cyborgs, plenty of military-style combat and action, and a large dose of erotica.

Actually, maybe that dose needs to be cut in half. Reading through, it seemed as though every ten pages there had to be a mandatory sex scene, and while I understand that this is a major part of the story (the robots in questions are, after all, sex dolls) I still felt as though it was overdone, especially when every description of every hot scene seems to be the same. In fact, repetition as a whole is the third serious issue that Apocalypse Doll Reboot suffers from. Not only are the sex scenes the same formula over and over, but so are the women. Sure, one may dress like an old school Geisha while the other pretends to be a country girl, but everything else is the same between them and quite a few of the other women in the book; all are described as drop-dead gorgeous with perfect bodies and perfect hair. This may make sense for the robot women, but when two of the four human females share the same description, things getting boring pretty quickly.

Luckily, that is the one good thing that Reboot has going for it: the action. There’s plenty of it to be found too. Basically any time that some sexual innuendo isn’t being used for the fifteenth time, someone or something is getting blown up, shot up, beat up, or generally abused in some way and while these parts help to keep the reader entertained for a short while, they just aren’t enough of a reward to slog through the entire story. I would like to end by saying again that if the author were to simply hire an editor to fix even half the mistakes present now then this would make a very entertaining novel for any zombie fanatic, robot aficionado, or action lover. 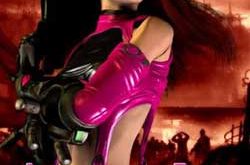