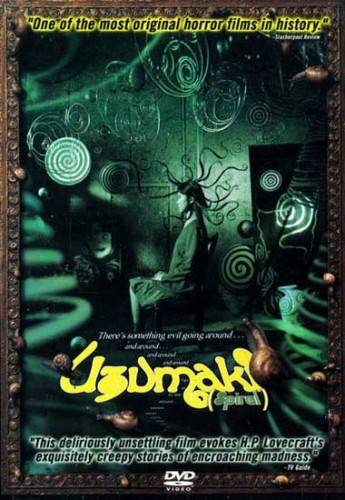 In a small town in Japan, Kirie comes upon her boyfriend’s father silently videotaping a snail. He seems unaware of her presence and she thinks no more of it. Later, the mans obsession with spirals becomes more and more bizarre, ending in his suicide in a washing machine which turn his body into a spiral. Soon other inhabitants become possesed with different forms of spirals, one student seems to be mutating into a snail, another’s hair becomes strangely medusa-like. The entire town becomes possesed

Spirals and vortexes , spiral , spiral , spiral , vortex , vortex , vortex. Look around you , you’ll probably find one. See , you did didn’t you? Now this is another movie I totally stand behind and recommend purchasing for your own personal collection. I have a copy and have seen it at least four times and will see it again multiple times. It’s truly like no other horror film I have seen in recent memory. Different from even other Japanese horror films like RINGU , JU-ON , AUDITION and any others you can probably think up. 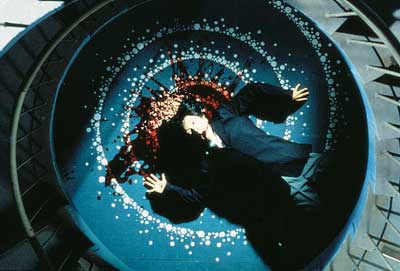 There’s a town called Korouzu and this town is under the curse of the vortex. The movie begins with the main character a schoolgirl named Kirie. Late for school she runs to make it to class on time and along the way runs into her best friends , a boy named Shuichi , dad.. Shuichis father is obsessed with vortexes , anything that is spiral shaped or has spirals on it. His obsession goes so far that Kirie sees him videoing snails crawling up the side of a wall. She finds it mildly creepy and runs off to school quickly forgetting about her best friends fathers addiction to spirals.

This is a good movie and has many elements working in it’s favor. I like how it takes just the right amount of time to introduce us and touch base with Kirie and Shuichi letting us get to know them and care a little bit at least about them. And I gotta mention how unbelievably cute Kirie is , she really does look like a Japanese anime drawing and most of the other girls in here are equally adorable.

UZUMAKI also has a few moments of levity and humor without turning the movie into a comedy and taking away from the horrorific vibe the film carries and it does also have a freaky b – flick feel it never seems uneven and also reminds me of a David Lynch movie with a tinge of David Cronenberg.

The vortex curse spreads slowly at first then quickly consumes the town in different ways and it made me think how our world is full of spirals and vortexes , in nature , in our daily lives , even in our bodies that we never notice or think about. The movie follows Kiries point of view and how she percieves the events unfolding in her town. And there doesn’t seem to be much she can do about it and doesn’t try to. Shuichi repeatedly asks her to run away from the town with him but she always declines. The source of the curse is never revealed , if there even is one , it just happens. There’s no way to fight it , no magic spells to stop it but it is malevolant in nature and is out to destroy everyone in the town. 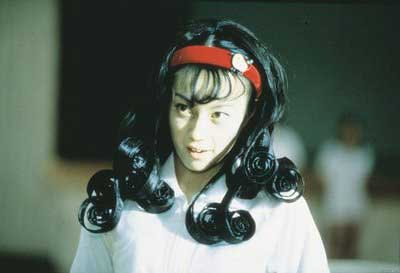 Which makes for some really inventive and gory suicides which is how most people die in the movie and there are some good spiralized deaths. One kid who likes to scare Kirie jumps off a balcony and splatters on the floor and when we see the view from above it is down on a spiral staircase with his body at the center. There is death by spinning in a washing machine , another kid who likes Kirie who jumps in front of a car and gets twirled around the front wheel , and a few other somewhat normal suicides involving spirals in places you never think of but are so obvious. Then there are the even more bizarre supernatural vortex deaths that must be seen. Even some of the local highschool kids start turning into giant snails! Even though this is done almost entirely through cgi it looks really cool! Alot of the efx are through cgi but this is one movie where cgi truly enhanced what they were trying to do but there are traditional efx as well. 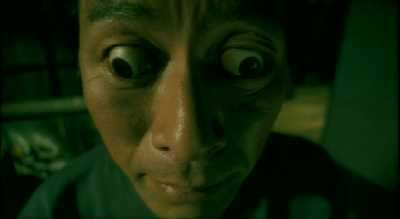 Director , Higuchinsky , is either very talented or was so inspired by the subject matter as he uses alot of camera tricks and styles of direction and there are some scenes that could be either matte paintings or totally done by cgi , I can’t tell , but it reminded me that a film is made up of images and pretty much anything can be used to make them..

Towards the end things rapidly descend into a vortex nightmare as people start dieing quickly around Kirie but I don’t want to give too much away. There’s so much more that you will discover on your own and you will get this! Like I said before it stands up to repeated viewings and is easily avaliable. It is on amazon and I have seen it at blockbuster too. 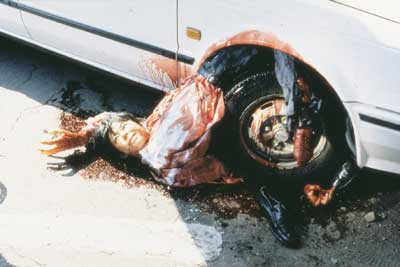 This is not like EVIL DEAD 2 , STREET TRASH , BRAIN DEAD , or THE CONVENT but it has that same wild spirit that gets me all enthusiastic about horror films and movies in general. My only minor complaint is that there is no sense of urgency or feeling that the film is leading towards a finale or any kind of resolution but I didn’t mind it so much. I’d even go so far as to say UZUMAKI is in the top ten of best Japanese horror movies in the last decade for sure.