AMC’s Fearfest 2012 Previews 10 Shockumentaries!
“Get Your Shock On!” 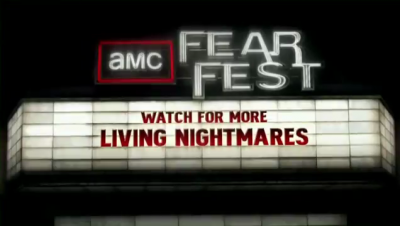 AMC’s Fearfest 2012 continues with its horrifying film schedule that includes classic and modern films. The Friday the 13th marathon, which began Oct. 13th, continues with Jason Goes to Hell: The Final Friday (1993) Saturday, October 20th. Jason Voorhees returns in this sequel to face members of his own family. No one gets out of this film alive! Jason returns six times in six sequels to complete the Friday the 13th Marathon this Saturday. Two modern day classics end this horrific weekend Sunday, October 21st. Justin Long stars in Victor Salva’s Jeepers Creepers (2001). Long is Darry. Darry returns from college with his sister, Trish (Gina Phillips). A winged demon returns with them (4:00pm, PST)! George A. Romero’s zombie thriller Land of the Dead rounds out AMC’s huge selection of Halloween films this weekend. In Land of the Dead, the late Dennis Hopper stars as Kaufman. Kaufman is a greedy tycoon who wants to stay in power during a zombie apocalypse. His strategy works until someone opens the door to his kingdom. Over ninety feature films are helping to celebrate AMC’s 2012 Fearfest.

AMC has also developed several mini-shockumentaries to precede and play during these many films. 10 ‘Living Nightmares’ will be aired during AMC’s Fearfest beginning October 15th. These short reels of 3-5 minutes in length include: the violent expose “Breaking Point,” the eye-opening hydrophobia focused “Dead Pool,” the controversial alien short “Invasion” and the human blood drinking documentary “Blood Work.” All of these short features focus on a specific human terror!

Several horror stars are featured in these mini-documentaries. Horror icon Bill Oberst Jr. (Abraham Lincoln vs. Zombies) re-enacts Elliot Cruise’s real life testimony as an extraterrestrial expert in “Invasion.” Cruise’s real life accounts of Area 51 and the Roswell Incident will terrify viewers and it will make them see the universe in a much different way. Actor Circus Szalewski (Zombies vs. Strippers) is Rusty Wallingsford in “Abduction.” Rusty recounts his experience at the hands of a greyish alien species who used scalpels to tear into his friend. Dave Vescio (Lost Soul) also stars. Vescio retells Det. Pink’s many years of experience pursuing criminals who drink blood for “power.” Video evidence from “Blood Work” also suggests that there are dozens of “blood-drinkers” operating actively in the San Fernando Valley. Finally, Irina Stemer (The Killer Within Me) is Dr. Metgzer in “Cannibals.” Dr. Metzger has promoted real life cannibalism for years now. Droughts and a lack of food, she believes, mean that cannibalism is now a viable alternative for human consumption! All of these terrifyingly true tales are now available to watch at AMC’s Fearfest or through the AMC Youtube Channel linked below. Discover the truth behind all of these myths now!

*the complete line-up of Mini-Docs’ include: “Breaking Point,” “Sleep No More,” “Dead Pool,” “Bugged to Death,” “Invasion,” “Cannibals,” “Blood Work,” “Hallow’s Eve,” “Evil Spirits,” and “Abduction.” All of these episodes will be shown between October 15th and October 31st.

“Blood Work” is also found in all of its goriness here: www.youtube.com/watch?v=2KzeTO966oQ

The Mini-Doc’ “Invasion” is here: www.youtube.com/watch?v=X3TJQiOnqlQ

And “Abducted” is found on Youtube.com here: www.youtube.com/watch?v=ZUC0C7Bu8_g