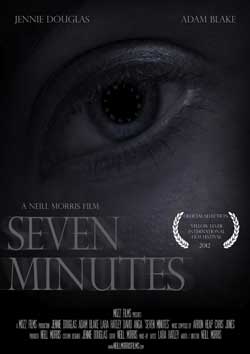 Plagued by nightmares of a demonic man ever since her childhood. Anabel quickly learns that her nightmares are a lot more real that she could ever have imagined. A normal day quickly turns into one of terror, as she is hunted down and lead to a shocking truth by the person she fears the most.

Made on a budget of an astonishingly low £200 and having no crew apart from Neill Morris himself (who wrote, directed, shot and edited it), this short film has already won best short at The Great Underground Film Festival! Even the main actress (and ‘costume designer’ in Seven Minutes) was Neill Morris’s fiancée! Talk about keeping it in the family. Indeed, it is nice to see a modern horror that relishes the tension and dread, rather than just wham-bam, knives and blood everywhere. Despite the fact that it was very short (as the title suggests…), I certainly felt a sense of foreboding – which is something even some feature length films fail to achieve!

This begins as a classic ‘slasher’ style movie (is there a killer in the house? There must be a killer in the house. But where?), with very minimal music used – the lack of music was sometimes a hindrance, but most of it actually worked quite well. Oftentimes, the ‘scary’ music on horror films is really exaggerated, but this used it in a really understated way.

This enables the audience to truly immerse themselves in what’s happening, as if we’re actually there! If anything, an absence of music is almost always more creepy than any music ever could be. It’s that expectation of knowing something’s about to kick off at any minute that really gets you.

Seven Minutes introduces us to a girl who has sleeping problems and it almost appears that her nightmares are becoming a reality, the boundaries between reality and nightmare are becoming blurred – this is a really frightening concept in itself! We are taken on her journey and questions begin to emerge about whether it was really all a nightmare after all. The use of intense close ups really gives a claustrophobic yet intimate relationship between the viewer and the main character. This is good as it means that we immediately identify with her, and are just as curious to discover the meaning behind the peculiar events that surround her as she is.

The colour palette for Seven Minutes consists of completely dull and muted colours which reflect the dingy, bleak atmosphere. It made the ‘glowing eyes’ of one of the characters all the more jaw-dropping when they did appear – why glowing eyes, you say? Well, you’ll have to check this film out for yourself to understand that! And ok, the effect is not exactly ground-breaking but I still thought that it looked pretty cool. It helped to give a whole ‘supernatural’ element to the whole thing, just when you thought that things couldn’t get any weirder.

I won’t give away the twist of this one, but whilst it wasn’t a total shock, I still found that I was pleasantly surprised with what unfolded. The premise itself was an interesting one, and could easily have been expanded to make a decent feature length film! There’s still questions left unanswered, but that’s alright – it just means that there’s room for viewer interpretation, and that’s almost always a good thing.