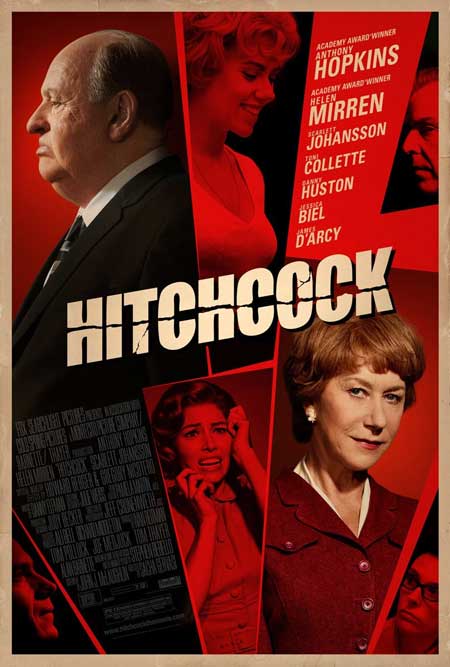 To drearily refer to Alfred Hitchcock as great director is akin to stating that Leonardo DaVinci had a couple of good ideas. Not only the most influential film maker in modern American cinema, Hitchcock was a sheer force of nature during his Hollywood reign that spanned fifty years, from humble silent roots to his final bow with “Family Plot” in 1976. Hyperbole simply doesn’t exist when describing the man. Through a period when the country embraced the mindless froth of lavish musicals, screwball comedies and an encompassing “Leave the weird stuff to the French” attitude towards big screen entertainment, Hitchcock emerged as a true artist in the medium. To this day, his silhouetted profile remains arguably the most iconic, with the possible exception of perhaps Lincoln. If Honest Abe removed that groovy stovepipe hat, however, you may easily mistake his blackened likeness for that of the bearded Crispin Glover in “The Donner Party.” There is absolutely no denying Alfred Hitchcock. To adoring movie geeks worldwide, he is our Elvis. 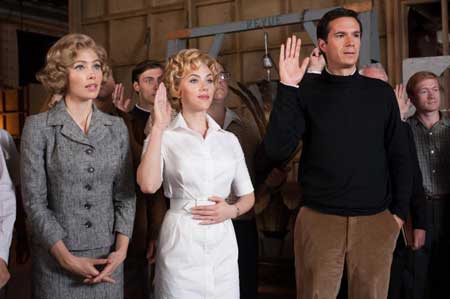 The fact that “Hitchcock” chronicles his rocky excursion through fiscal strife and censorship battles in order to usher “Psycho” into brilliant fruition makes it a double treat for horror aficionados as well. Nearly every film maker in our marvelously macabre genre worth uttering more than one syllable about will credit this classic shocker as inspiration. Without the raw tension permeating each frame of film, John Carpenter may have never knocked off Bob Clark’s “Black Christmas” to create “Halloween.” Deprived of the seemingly unflinching (it’s actually deceptively tasteful) violence displayed, “Night of the Living Dead” could have forever remained George A. Romero’s favorite fever dream. “Psycho” didn’t just bend the staid Tinseltown rules of the popcorn thriller, it rewrote them to its own devious and gleeful purpose. 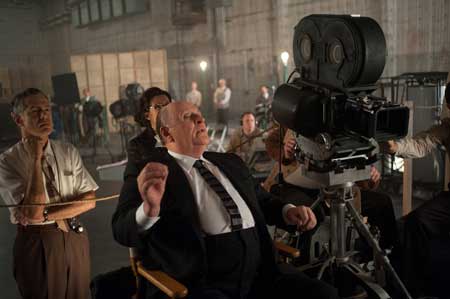 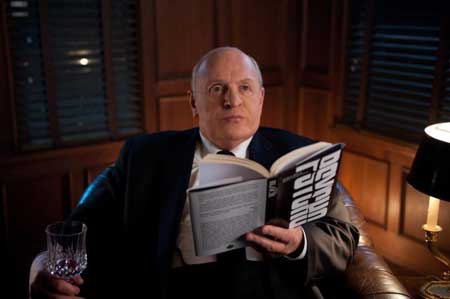 It all begins with a delightfully cheeky and unexpected pre-credit introduction delivered directly to the camera by the man behind the title himself. This, of course, is a clever nod to the television series “Alfred Hitchcock Presents”. Promptly following the 1959 premiere of “North by Northwest,” our man Alfred (“Hitch” to employees and loved ones alike), as portrayed by Anthony Hopkins in an uncanny transformation I will delve more deeply into later, is antsy to get the cameras rolling again. Upon hearing suggestions arise that his star may be fading and after passing on such soon-to-be quintessential productions as the James Bond franchise, Hitch becomes obsessed with the Ed Gein story and subsequent murder trial. Like his near-fanatical admirer, serial killer Gein was a precise craftsman. With the cold resolve of his madman muse, Hitch decided upon an adaptation of Robert Bloch’s Gein-based novel “Psycho” for his next directorial effort. His long-suffering assistant Peggy (“The Sixth Sense” mother Toni Collette), disgusted by the lurid details and subject matter of the book, informs her employer of the inherent risks involved. After all, horror films were regarded (and still are today, for the most part) as no more than insignificant nonsense, to be taken without even the most trifling grain of salt. Hitch’s response: “But what if someone really good did one?” 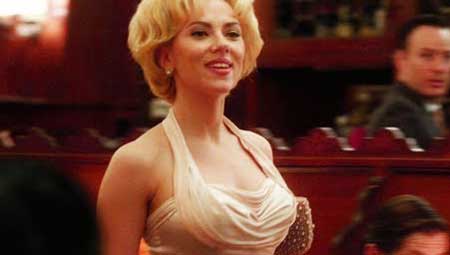 Paramount Studios, though financially fattened by Hitch’s many successes, refused him a dime to fund his picture. Here is where “Hitchcock” switches gears a bit, as he is forced to mortgage his immaculate estate in order to see the project through, much to the supportive chagrin of wife Alma Reville, given voice and eternal beauty by Helen Mirren. What could have been a more fascinating piece of behind-the-scenes enchantment gives short shrift to the process of making “Psycho”, and becomes an aged love story between the complacent couple. Alma, feeling like one of the many shadows cast by her husband, begins a chaste yet not-quite-innocent friendship with writer Whit Cook (Danny Huston, one of my favorite vampire bad asses in “30 Days of Night”), whom she is helping with a screen adaptation of his own novel. This feels initially like misplaced focus, as the moments revealing the crazed lengths gone into creating “Psycho” are so deliciously captivating. One example in particular details the one take close-up of Janet Leigh (Scarlett Johansson) as she drives away from the scene of her crime, a nervous freshman embezzler on the lam. Hitch does not merely bark direction at his unsuspecting actress as Orson Welles was infamous for, but berates her with alarming, vulgar motivation, bullying the emotion he requires out of her. In impotent frustration over his wife’s possible affair, he takes this approach to the extreme whilst filming the consummate shower sequence, resulting in arguably the most effective five minutes “Hitchcock” entails. 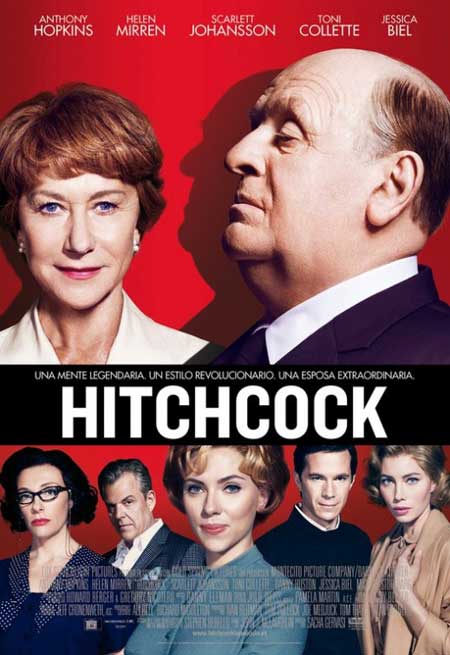 These few moments would completely overshadow the brunt of “Hitchcock” were it not for the commitment of its leads. Hopkins and Mirren both rise so far above the material presented, they make it a supremely daunting task to even recall what exactly bothered me about the film in the first place. I concede, as well as guarantee that I am about to acquire several enemies within the next two sentences here, I have always found Sir Anthony a bit overrated in his assorted roles. Frankly, I thought his Oscar-winning turn as Hannibal “The Cannibal” Lecter (“Silence of the Lambs”, for those who have just emerged from a cave after twenty-five years of hiding) a bit too winky-wink for the necessary tone of the movie. Brian Cox nailed the Lecter vibe much more faithfully to the original Thomas Harris vision in the glossy “Manhunter”, without the added incentive of performing in a gothic dungeon setting. Here, Hopkins is an enigmatic, insecure genius, and you can’t take your eyes off him for a second. Mirren, whom you will never hear a cross word against from yours truly, is his undiminished equal in a role with only a fraction of the razzle-dazzle. Alma completes Hitch, and proves the “behind every great man there’s a great woman” idiom beautifully. When she berates him after he accuses her of infidelity, you’ll want to crawl under the rock his frozen eyes are secretly searching for with him. They are dynamite together.

The supporting cast is uniformly strong, though given that only a couple of sparse scenes are not dominated by Hitch or Alma, they dissolve into set dressing for much of the brief 98 minute run time. In odd fantasy sequences that place him in Hitch’s world as secret confessor, Michael Wincott as Ed Gein would be completely unreconizable from his earlier tough guy roles in “The Crow” and “Alien Resurrection” were it not for the dead giveaway of that otherworldly vocal delivery. He is the best of the bunch, chilling and almost surreally sympathetic. Close on his heels is James D’Arcy (“An American Haunting”), who is so brilliantly spot-on in his innocent intelligence as Anthony Perkins, he lost me in the performance. Though a smallish and essentially thankless role, his unassuming Tony made me completely forget I was watching an actor portraying another actor. Jessica Biel (“Blade: Trinity”), Kurtwood Smith (“Robocop”), and a bevy of other reliable players are on hand to pad out the cast, but they are mere second-stringers on this team of two. Director Sacha Gervasi, who made one of the better rock documentaries with “Anvil: The Story of Anvil” in 2008, moves things along with an expert sense of pace and editing. Like every other facet outside of his leads, though, he won’t leave you waiting with baited breath for his next project. 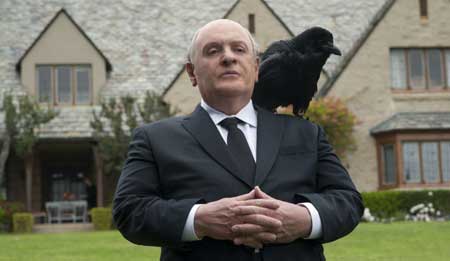 “Hitchcock,” unlike the veritable arsenal of blockbusters created by its namesake, will not make you rethink the artistic potential of popular cinema. You will not emerge from the darkness of the closing credits a shaken and (for better or worse) changed individual. However, as our portly hero addresses us directly once again in the final scene, wrapping up this engrossing chapter of his exemplary existence from the front lawn of a home he’d nearly lost in dogged pursuit of youthful creativity, I defy you to not be grinning ear to ear. Would Hitch himself approve of “Hitchcock”? He would most likely go into a long-winded diatribe, dismissing the entire campaign as a rather feckless endeavor. But I suspect, he’d be smiling himself as he harangued, sunkissed by the warm nostalgia generated just as yours truly was. I dare not speak further for the big guy, but that alone was enough for me. Hell folks, they can’t all be “Psycho.”