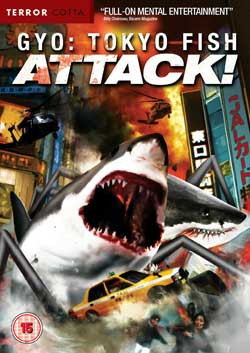 The friends Kaori, Erika and Aki are on a vacation to celebrate their upcoming graduation, when suddenly an infestation of mysterious walking fish forces them to reevaluate everything they care about in order to stay alive.

I knew after getting into this film, that it would be a harder one to review. A full length animation in the noted anime style, “Gyo: Tokyo Fish Attack” was hard to process from the get go. The element of interest for me was a pretty cool use of fish emerging from the sea that arrives in droves equipped with mechanical feet. Yep, a bit strange and stupid…you might be questioning this addition (the way I was) when they started arriving. This “fish emergence” has its roots in aquatic horror which has live sharks busting thru walls with droves of other aquatic things taking down humans in various ways. The purpose here appears to be “invasion”, but how they got here is a different story. In all “Gyo: Tokyo Fish Attack” can at times be highly surreal and other times like watching a SIMS game that you know nothing about. I found myself hoping this 70-minute film wouldn’t actually make it to the 70 minute mark, but hey… that’s just me. You have to give kudos to the animators who at times keep things boring, but at other times ramped up the horror visuals with lots of blood and weirdness.

But as exciting as that sounds, it’s not the content that you signed up for. “They” notice a rotten small early on that is revealed to that of a pretty mobile little fish. This marks the beginning of the fish attack. However, the real culprit here is the viral gas that is given off that begins to infect a few of the individuals. This later leads to a whole reveal of early experiments that a scientist had unleashed which causes the infectants to become these huge masses of fatty flesh (also mobile due to their mechanical legs)…huh??

Humans begin to assimilate into fleshy zombie lumps with tentacles jabbing into their anuses as they walk about with bloodshot eyes and little to offer in conversation. The highlights are: the fish swarms which are illustrated pretty heavily arriving like c**kroaches. These sometimes often led by great whites who are more than happy to chomp on a few humans with their newly added leggings enhancements.

Did I find this to be a recommendation? Not really, but in due respect it still has some wildly science fiction based horror elements to it. Horror fans will get enough to take home with them but might scratch their head doing so. I just find the Asian logic in this case to be off base and perplexing

The film while taking an approach I compared at time more to “Akira”, is a bit of a mess that was inspired by a popular manga series named “Gyo”. It might be worth a sit down just for novelty sake and to say to yourself…”now I know what they meant by, what will they come up with next”.