Home | Blood Marsh: Krackoon Wraps to the Sound of a Mutant Racoon

Blood Marsh: Krackoon Wraps to the Sound of a Mutant Racoon

You can’t keep a good drug addicted monster down: principal photography has wrapped on the feature Blood Marsh: Krackoon from writer-director Jerry Landi and producer Marc J. Makowski (Slime City, Slime City Massacre). The film is a feature length sequel to Krackoon, which told the tale of Red Eye, a mutant raccoon with a bad habit. Although the original film was a popular title on the film festival circuit and won Best Cult Film and Best Horror Film at the New York International Independent Film and Video Festival, its short running time hampered distribution prospects. Blood Marsh: Krackoon serves as a reboot for horror fans unfamiliar with the original and features higher production values and superior special effects. 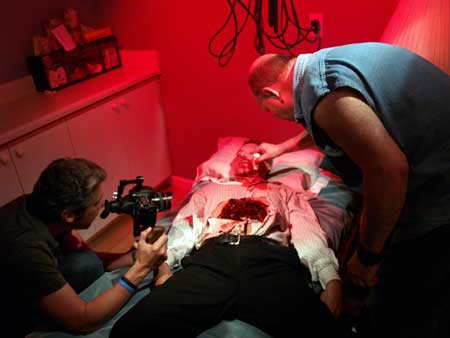 Landi attributes the greater scope of Blood Marsh: Krackoon to Makowski, who was not involved in the original production. “I knew Marc’s credits when we met, and after seeing Krackoon, he asked what I was working on next. I showed him the script for Blood Marsh: Krackoon and he offered to do the animatronics and CGI, which was an offer I couldn’t refuse. He really believed in the concept, and pushed me to make a film that did it justice.”

“I told Jerry that if he ever did another horror film, I wanted to take the effects to a higher level,” says Makowski. “Little did I know that we would start pre-production on Blood Marsh: Krackoon two months later. What appealed to me about Jerry’s script is that it’s a goofy horror comedy that gets progressively darker and more horrifying. We knew we had to pull out all the stops to make distributors take notice.”

Blood Marsh: Krackoon filmed on weekends and afternoons from November 2011 through August 2012, at a Bronx medical facility, a civic center, and an auto body shop. Makowski handled the special make-up effects and his South Bronx EFX Works partner Julio Garay created the creature animatronics. Actress and former Playmate Cindy Guyer (Psycho Cop) joined returning Krackoon cast members Sal Amore and Joe Ferri, and newcomer Gina De Salvatore. The lengthy shooting period enabled Landi to edit on his down time. Now he will fine cut the film while Makowski and Garay add CGI overlays to their practical effects and animatronics. A 2013 release is anticipated.