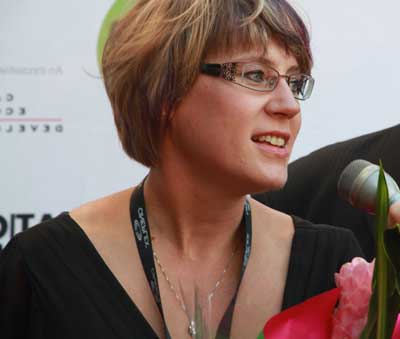 Below Zero is a new movie that sounds pretty damn awesome. It is about a washed-up screenwriter who is suffering from a horrible case of writer’s block who decides to do something drastic in order to write a script that will make people take him seriously. Starring Edward Furlong, Kristin Booth, and genre legend Michael Berryman, this film sounds like it has potential to rock. I recently had the opportunity to speak to Signe Olynyk, who wrote the screenplay for this film.

Todd Martin: So tell us a little bit about Below Zero. What is the premise and how did you come up with the idea for the script?

Signe Olynyk: Trapped in an abandoned slaughterhouse, a desperate screenwriter is paralyzed by writer’s block and tormented by a horrific serial killer of his own creation. He sinks into a claustrophobia-induced paranoia, where he can’t distinguish what is real from what is written, with his life hanging on every page. We are proud to say that ‘Below Zero’ keeps you guessing until the very last frame.

My producing partner and I focus on writing and producing what we call ‘Man In A Box’ type of films – well written, low budget stories with minimal characters trapped in contained locations. I had a concept about a guy locked in a meat freezer, and that was about as far as I could go. I developed the worst case of writer’s block. In order to overcome it, I arranged to have myself locked in a slaughterhouse freezer. I spent five days there writing the screenplay, and we shot the script at the same location.

TM: How would you best describe it? Is it a horror film, a thriller, a psychological film, or a combination of each one?

SO: As a smart, twisty, thriller-horror, but quite different from most genre films I’ve seen over the past ten years or so. To me, it was about writing a great, suspenseful story, and less about the buckets of blood. It’s story-driven, not gore-driven – although the gore that is there is well done. I wanted to bring something new to the genre that hopefully the fans would respect and respond to.

TM: What was it like working with Edward Furlong and Michael Berryman?

SO: There is nothing like working with a professional cast. Both Eddie and Michael did a phenomenal job, and their performances show it. I believe this is Michael Berryman’s best performance ever, and he did an incredible job bringing the character of Gunnar to life. Eddie plays ‘Jack The Hack’, and he really captured the anguish of being a tortured artist. We were very fortunate to have such great support and talent from them both. 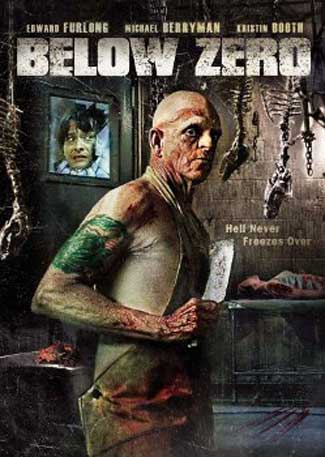 TM: Was it a difficult film to write?

SO: This was, by far, the most difficult script I’ve ever written. It was like being on ‘Top Chef’ where you have a horseradish and chocolate, and you have to somehow make a salad. Writing great stories that are compelling and deserving of an audience is always a challenge, but to do so with ingredients such as a small cast, a limited number of locations and special effects, is extremely difficult. And if you are trying to do something fresh that hasn’t been seen before, well, it’s no wonder I had writer’s block. You could say I am a method writer. My next script is going to be about some guy trapped in Club Med (laughs).

TM: Other than Below Zero what other films or television shows have you written?

SO: My producing partner (Bob Schultz) and I have been actively developing a slate of low budget thrillers and horrors. We are currently in pre-production on a zombie thriller called ‘Breakdown Lane’ that Bob wrote. We hope your readers will consider contacting us and pitching projects to us. They can reach us at info@belowzeromovie.com

Bob and I also run the Great American PitchFest, which is an annual screenwriting conference held in Los Angeles each June with nearly 2,000 writers attending. We offer more than 20 free classes for anyone who wishes to attend and learn more about how to become a professional screenwriter. On the Sunday, they can pitch their scripts to industry executives who can option their screenplays, hire them as writers, or represent them as agents or managers. Your readers can learn more if they are interested by either contacting us at info@pitchfest.com or visiting our website at www.pitchfest.com 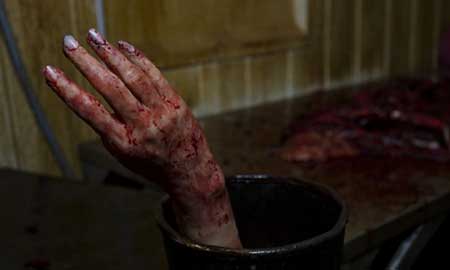 TM: Tell us a little about yourself. What do you like to do in your spare time?

SO: We’ve been so busy making the movie, and travelling around the world with festival appearances that there hasn’t been a lot of spare time the past three years. We’ve been in Scotland at the ‘Dead By Dawn’ film festival, Australia for ‘A Night of Horror’, and we’ll be in the UK for ‘Grimm Fest’ and Transylvania in the fall. But my favorite days are hanging out with my niece and nephew and spoiling them like crazy. I am also an avid hiker and love to backpack. My best days tend to be on the river, floating along in my raft and soaking up the peace and solitude that goes with that. My love of nature and tranquility is probably a bit ironic for someone who writes horror movies.

TM: What is your favorite movie of all time, and why?

I love movies that say something, but don’t smash us over the head with a message. ‘Big’ from the 80’s is one of my all time favorites. It explores whether someone can become a man without having first been a child. And anything Stephen King writes is just fun, and guaranteed to take us on a ride – ‘Stand by Me’ is a coming of age buddy movie about a young teen who is able to say goodbye to his deceased brother and his own childhood when he and his friends journey to find a dead kid. ‘Little Miss Sunshine’ is about a dysfunctional family who are each grieving their own shattered dreams, but become a family when they drive across the country and help their youngest daughter achieve her own dream of participating in a child beauty pageant. These are all movies that say something, have characters we care about and identify with, and they make us feel something. That’s what all movies should strive to do, whether they are horror movies or family films.

TM: Do you have a particular genre that you prefer when it comes to writing? In other words, would you rather write a horror screenplay, a comedy, a drama, etc.?

SO: I love horror movies, and anything that is suspenseful. But I don’t typically write horror. My tastes tend to run more mainstream, although I have enormous respect for any writer who tries to do something different. Charlie Kaufman (‘Eternal Sunshine of the Spotless Mind’, ‘Being John Malkovich’, ‘Adaptation’) is a brilliant mind, and he writes really challenging scripts that are unique and fresh. It’s easy for a writer to crank out stories that hit the same story beats and are just generally ‘safe’, popcorn fare. I think you can write commercial scripts and create original work – we’re killing our own industry if we don’t. I try to write commercial stories that are unique and respectful of audiences, and gives them something new. If someone is going to spend 90 minutes watching a movie that I wrote, then I want to make sure they are rewarded for that experience and that I craft the best, most original story I can that takes them on a ride they aren’t expecting.

Many screenwriters are advised to write for one particular genre because it helps to identify them as ‘experts’ in that genre. There is a lot of sage advice in that, and it certainly helps them to build a career crafting scripts in that genre. However, it’s also like telling a writer that they can only feel one emotion and they must always write ‘horror’. I happen to love all genres – horror, comedy, coming of age stories… My goal is writing enough samples of each genre, so that my career can be more varied. 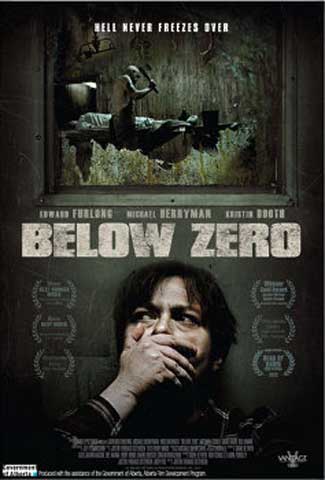 TM: Who would you say is/are your biggest influence(s) when it comes to writing?

SO: There are so many great writers. Diablo Cody (‘Juno’) is one of my hero’s. Her writing is so funny and heart-breaking with honesty. Most of all, I love the interviews I’ve read because she is brave and isn’t afraid to put herself out there, and be her most authentic self. We should all strive to do the same. Josh Leonard is another great writer. ‘The Lie’ is a smart, brilliantly funny script that isn’t afraid to explore awkward questions. And I love all the writers at Pixar, particularly Pete Docter (‘Toy Story’) and Michael Arndt (‘Little Miss Sunshine’). They share their love and lessons of the craft with others. These people are all mentors, although I’ve never had the fortune of meeting any of them. They are mentors through their interviews, their articles, and the brilliant scripts they write.

TM: If you could work with anyone in the film industry who would it be?

SO: I would have loved to have known Nora Ephron (‘Sleepless in Seattle’, ‘When Harry Met Sally’). She had a gift for capturing the words that defined what it meant to be human, and how to weave emotion into the characters and stories into the stories she wrote. I think Penny Marshall and Carrie Fisher also do this. I think they are phenomenal women and their work inspires me.

TM: Are you working on any projects right now that you would like to talk about?

SO: I am constantly writing and developing new material. Being a producer takes an enormous amount of time and energy away from my writing, and the screenwriting conference I run is also a massive undertaking. It is difficult to manage everything, but writing is what makes my heart sing. Creating a body of work is where my priorities need to be, and I’m working hard to guard my writing time as much as possible. This winter, I’ll be spending it on an island writing for about five months. I hope to polish and get at least two new scripts complete in that time.

TM: If you were given the opportunity to write the script for the remake of any movie what film would it be and why?

SO: ‘Flatliners’ and ‘Duel’. I think both are fabulous films, but they are dated now. I’d love to see these films reach today’s audiences. ‘Flatliners’ was the movie with Julie Roberts, Keifer Sutherland, and Kevin Bacon about a group of medical students who took turns ‘dying’ and bringing themselves back to life. Very cool concept. ‘Duel’ was a terrifying car chase about a demon truck that basically chased down a salesman as he drove through the mountains. I believe it was the first film Steven Spielberg directed. 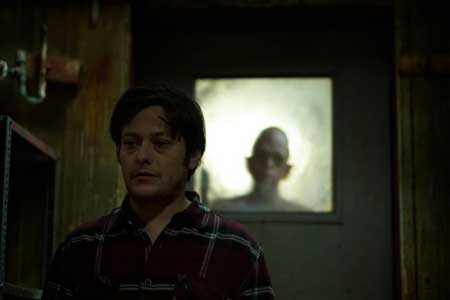 SO: My producing partner and I may be the driving force behind our film, but it is the town of Edson, Alberta who made this film. We spent over a year gathering props, painting sets, and working with volunteers from this small town to make ‘Below Zero’, and we are so grateful to them all for all their hard work. We had a team of volunteers working alongside our crew to help make this movie on a very limited budget, and it was an extremely difficult shoot. We only had 18 days of filming, and not nearly enough money to achieve everything we were trying to do. We slept in a slaughterhouse, we showered at truck stops, and we slept…well, never. Our cast, our crew, and the entire town of Edson, Alberta should be very proud of their work on this film. I am very grateful to them all.

Special thanks to Signe Olynyk for letting me interview her and to Scott Essman for giving me the opportunity to speak with her! 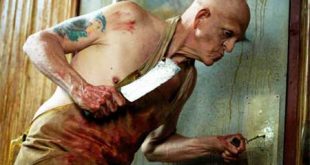