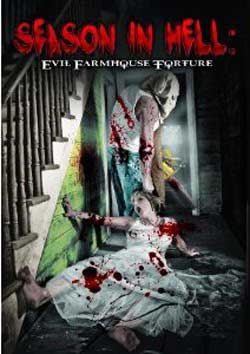 The east coast of the US has been besieged by apocalyptic terrorist attacks. Friends Carl and George take flight. They seek supplies at an eerily quiet farmhouse only to meet a farmer named Marbas Hiram. They discover that Marbas is the crazed overseer to a basement full of women, some who worship him as a deranged Messiah. They discover the farmhouse is actually the gateway to Hell! Evoking the trippy style of Jess Franco and the savage intensity of early Wes Craven, “”Season in Hell”” is a surreal psychedelic homage to the 70’s era of horror films.

You always have to be suspicious of names that run on too long. Even more so if they suggest some form of sick torture acts in the title. I will say, knowing “that”, that it also prompted me to investigate a little sooner than later to see if there was any meat to this assumed low budget mess. Oh and despite the glorious marketed “synopsis” line, there is good reason “not” to buy everything you come across. 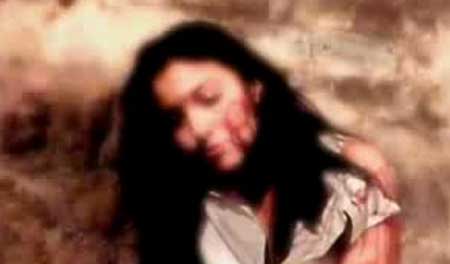 Now some films just simply come off bad, low production and cheap. Others not so much but lack in decent storytelling. “Season In Hell: Evil Farmhouse Torture” seems to incorporate both of those factors. It was quickly after the introduction scenes that I realized it would almost be impossible to sensibly review this film as it was mostly used as a visual editing experiment. Or better yet a kaleidoscope of confusion

What do I mean by that? Well, I’m sure you’ve seen your share of overzealous editors who use every effect plug in that they can find to give the film a surreal 70s look? OK, 70’s is alot more than a few filters, it’s a trend, a style, and a sense of storytelling (aka Texas chainsaw Massacre) Instead, we got warpy cuts, ink-blot like transitions, blurred shaky cam edits and a whole slew of out of the box effect add ons (dirty, bleached, 1 tone, tri tone, skip framed..). However with all “that aside, you are probably wondering what the hell this film is about? 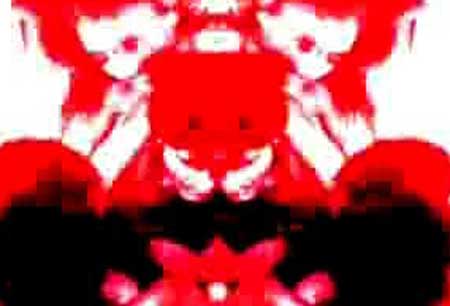 Ok, here we go…a pair of travelers stop by an old country farm house in search of some help with their gas situation. They have run out of money AND gas and are hoping that a fellow local might lend a hand. The good ol country boy invites them in for the night, offering them a couple of “frosties” and a place to sleep. Curiously they decide to head downstairs to take a peek (no reason…..just because…)

Low and behold we got one bloody female at the staircase end and a room full of weird activities going on. One girl whips another, while one dressed as a nun is praying in the background. They proclaim “something ” to the visitors, but nothing that makes any sense. Then not too much later, a leather face wearing brute enters with cutting and dismembering on his agenda. 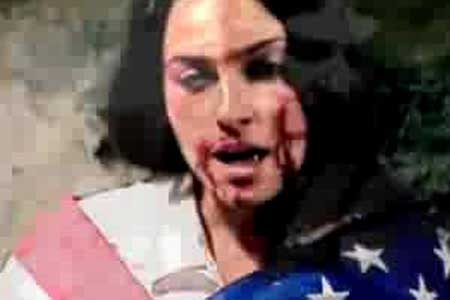 Now before you get too excited, I can guarantee you this is the type of film you’ll be fast forwarding thru (most of it). It tries to come off as an art film, but it’s really just a sloppy mess of cuts, collages, color beaching, tone changes and camera nonsense. At best it might work over a death metal song and kept to 3 minutes of music video, but as a film it’s just a glob of visual experimentation. You never have a storyline, plot or premise (or a clue) as to what’s “supposed” to happen. Just shots of a masked man chopping off limbs, dragging bodies and congregating with a bunch of females dancing around. 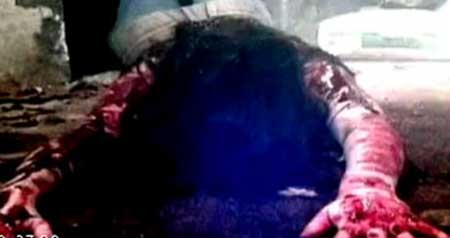 What do I recommend? Pass this one up completely. Even if you are drawn to the extreme nature of its edgy title you won’t be satisfied enough to make it worth your time. I would guess portions are inspired by a few Marilyn Manson videos, but in that respect I would say the MM videos are great material and this simply isn’t. Not every release is qualified to be called a film, and “Season In Hell: Evil Farmhouse Torture” is great proof of that.