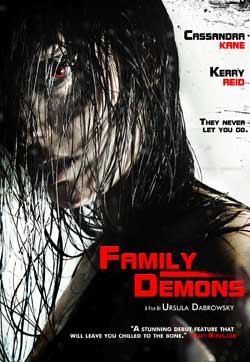 When an abused teenage girl murders her alcoholic mother, the mother’s vengeful spirit returns to haunt her. Even in death, the mother is hell bent on denying her daughter her freedom.

I received a new batch of films to review from the big boss the other day and as I looked through them the title “Family Demons” stood out. I couldn’t tell you why it did but I just felt that I had to watch it before the others. Although my intuition lets me down nearly every time I follow it (It tells me the NY METS are going to win the world series every dang year), this time out it didn’t do too badly. 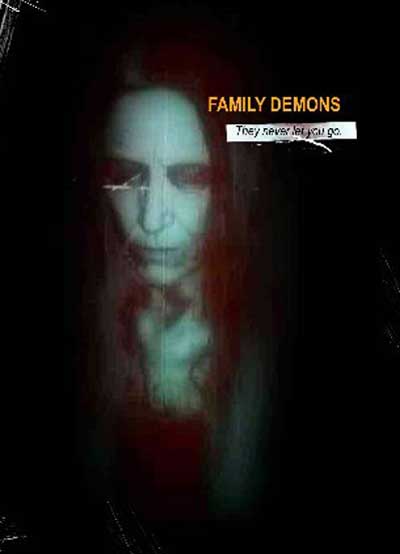 “Family Demons” opens with a scroll telling us that something sinister has happened in the “Sleepy, conservative town” of Adelaide (Located in Australia) and that a “Bizarre crime” involving a teenage girl who lived with her alcoholic mother had taken place there on a summer night. It goes on to say that the events of that night have been kept secret for years but now they are part of Adelaide’s “Long disturbing history of abductions & murders”. First off, where the heck is Adelaide and if it’s that bad there how come I never heard of it before? Secondly I had to ask if any of what was about to transpire was based on a true story? The film gives no indication as to whether it is or isn’t based on an actual event but I was extremely interested in what I was about to see. 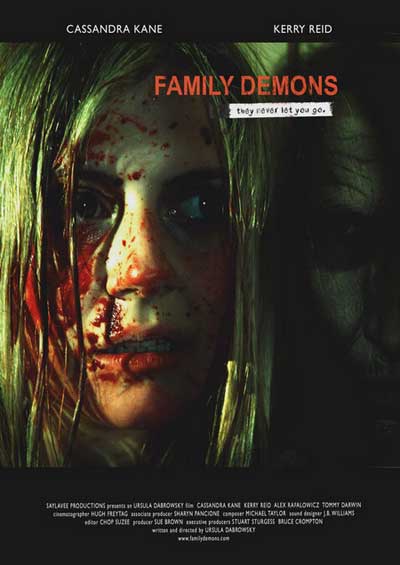 We’re shown the interior of a drab looking house as the film begins and as the camera goes from room to room we end up in a room where a young girl is on her knees, covered in blood with a dead body laying in front of her. Next scene has her digging a hole in her backyard to bury the body in. Afterwards she begins to scrub the blood trail that the body left as she dragged it outdoors for burial. Then the first of a few flashbacks begins in which we see a young girl (Not the one covered in blood) is saying goodbye to her boyfriend and walking home alone. She senses that she’s being watched and begins to run home straight away. From here we go back to the house with the young girl but is this before or after the murder she committed?

Her name is Billie and she’s looking at a new dress her mother has brought home for her. She thanks mom but then asks if she brought home any food to eat and accusing her mother of spending all of her paycheck on liquor and cigarettes. The mother becomes very defensive and screams profanities at Billie before she leaves the house and drives off to who knows where. Young Billie spends a lot of time alone in the drab house with no food to eat, no television or radio to listen to and no food to eat. You see, mom believes that the outside world is nothing but bad and doesn’t think twice about leaving Billie alone at home for days as she carouses around town. But since mom is an alcoholic who is prone to extreme mood swings does she really know what’s best for her daughter? 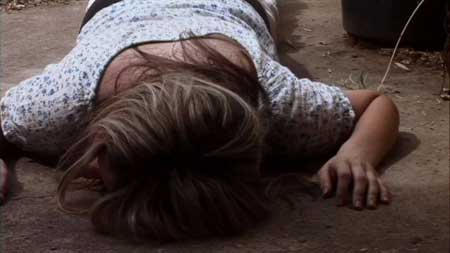 Mom (She doesn’t have a name) eventually returns home with a sleaze who almost immediately begins to hit on Billie before being called away to the bedroom but he does promise that he’ll see Billie again. Later on mom tries to explain to Billie what she went through as a young girl and how Billie was conceived (Mom was raped) and during her rantings she sees her long deceased mother (Billie’s grandmom) standing in the doorway looking like she stepped out of “Suspiria“. Not moving a muscle, just staring evilly at her daughter. She asks Billie if she sees her but of course she doesn’t, and from then on it’s all downhill for mom and for poor Billie…

As it continued “Family Demons” showed itself to be less of a full blown horror flick and more of a psychological thriller. Director/writer Ursula Dabrowsky has crafted a film that has echoes of Polanski’s “Repulsion” which is heady company to be compared to but manages to stand on it’s own as a effective (If sometimes plodding) shocker. Dabrowsky’s script is nihilistic to the extreme and as the film progresses I began to question what was really happening as opposed to what I was seeing. It’s obvious that Billie has some really big psychological issues to deal with and she is ill prepared to do that since she’s been essentially kept prisoner in her home for her entire life (She even gets chained to a radiator as punishment for daring to venture outdoors to get some food). On the few occasions we see her outdoors she’s either being chased by some thugs looking to rape her or just looking for food so maybe her mother was right to keep her shut in. Billie does meet a young man (Alex Rafalowicz) who tells her of his dream to get in his car and just drive, to where he couldn’t say but he knows he wants to get away and he asks Billie to join him. Much to her surprise she accepts the offer but she has to tell her mom and in the ensuing argument Billie accidentally kills her mother…or does she? 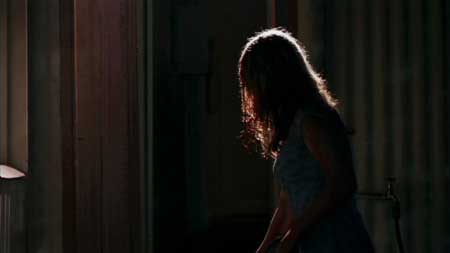 The titular “Family Demons” are either the ghosts of those who abuse or the ghosts of domestic violence come back to haunt past victims, it all depends on how you look at the big picture, ask 10 people and you’ll probably get a 5-5 split in that regard. Then again, they might just be guilt induced hallucinations that torment those who perpetuate violence on the helpless and innocent. The movie just oozes depression and since it’s essentially a one character show Cassandra Kane as Billie has to carry the weight of the film on her shoulders. Luckily she’s more than up to the task and watching her in scene after scene slowly growing either more desperate, insane or a combination of the two could have been made for a very slow moving movie if not for the earnestness of her performance. As mom, Kerry Reid gives what felt to me to be a very rote performance though. It’s not that’s she’s bad, she’s not but it’s a very familiar perf that I’ve seen countless times in the past, She’s good but she adds nothing to spice up the part. 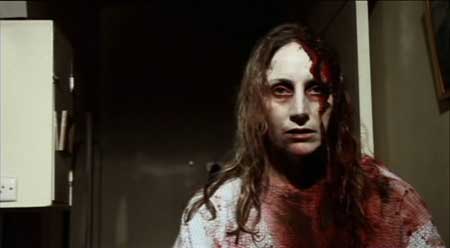 While The script is deftly written and not afraid to get ugly I figured out where it was going to end pretty quickly and the intended “Shock” of the finale failed to move me at all. The extremely low budget actually helps the film as far as hitting us over the head with the inherent bleakness of it all, this is one depressing movie acolytes. Kudos to Ursula Dabrowsky’s for not shying away from the ugliness of it all. The big question is whether you will like it or not? I personally dig downbeat, depressing stuff like this and I get a kick out of waiting to see how low a flick like this will go. “Family Demons” gets pretty low & gritty despite the familiarity of some of it and a few slow moments. I liked it and I’d really like to see what Ms. Dabrowsky can do with a decent budget, she definitely has talent. Three out of Five shrouds for “Family Demons”, an extremely ugly but entertaining film that isn’t afraid to go places that other films wouldn’t.