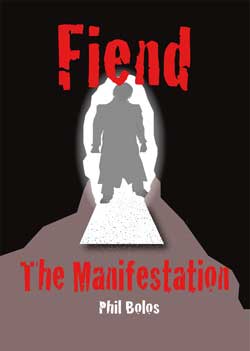 When Adam, sheriff of an unsuspecting, remote town of Larkin, Wisconsin is plagued with disturbing nightmares his grip on reality is gradually slipping. A sinister stranger named Barian dressed in dark with a trademark blue bow tie surfaces time and again not only with an absurd fashion taste but a prophetic sense of ultimate doom. To contribute to the Larkin’s finest episode of unease Adam is also visited by a captivating blonde woman who quotes, “Evil is coming Adam. It’s up to you to find a way to stop it.”

Seven strangers awaken in a hazy, surreal environment that imprisons each in shades of the Saw series. Although each has never met and they’re complete strangers to one another they share a common bond aside from being held captive. Emily, Rose, Joe, Neil, Katy, Isaac and Thomas each slowly recall their last conscious vision all had to do with Barian the messenger of demise.

Slowly, one by one each recounts their own story as to how they had arrived to the circumstances of being held captive by their ultimate judge, jury and impending executioner. Meanwhile Adam consults his best friend and the town’s local man of the cloth Paul about the evil behind his visions and the two embark upon an odyssey to decipher what it all means. While the seven explores the unholy labyrinth of their confinement we learn more about their individual tales leading to their fate. Each of the seven prisoners and their actions are symbolic of the seven deadly sins. Will their remorse and repent be enough to deliver them from evil? Will law, justice and faith be enough to save to town of Larkin from its ultimate Armageddon? Only The Fiend holds the answers.

At the risk of appearing like a complete bumbling buffoon, I’ll go on record as stating I’ve held onto this review for quite an extended period of time. The nature of my unintended tom foolery was a result of having read the novel, diligently taking notes and citing references and actually lost all of the content. As I wanted to give the novel a fair shake in the review and prove to all of the authors, directors and artists extraordinaire out there that critics do not always lurk in the shadows along with the c**kroaches, leeches, telemarketers and lawyers of our existence. So I read it a second time. I must admit this is sound advice to anyone who is curious in reading Fiend, The Manifestation.

The first time through I really didn’t like it. I thought it was contrived, redundant and counter productive. I was far from buying what the antagonist was selling. At first glance the evil lead character Barian struck an uncanny resemblance to Les Nesman of WKRP fame (or if you prefer a more contemporary reference Napoleon Dynamite) somehow their presence lacks a certain nemesis quality we look for in our villains. My initial impression of this character rendered me immensely irritable that so many variables of a good horror tale could be so grossly misguided.

And then something changed. My second time through, (and once again I cannot emphasize how essential it is to enjoy the Fiend experience two times over, you’ll thank me later) all of the subtle nuances and eccentricities came to life.

Bolos should be tremendously proud of his rare talent of sculpting a flawless delivery of subtext, symbolism and subplot. The use of lust, gluttony, greed, sloth, wraith, envy and pride are ingenious. What more disturbing opportunity for deep pondering other than our own mortality and the deeds we’ve done, let alone what we could’ve done. It makes for very thought provoking content that resonates with the reader long after the fact. I’m hard pressed to think of another fear as primal and universal as fear of judgment and meeting our ultimate maker. The author seems to have a firm grip on this concept and perhaps in a certain sense is toying with the reader in a subliminal, once again very subtle kind of way.

The characters for the most part are likeable and easy enough to relate to. Adam, the town’s sheriff is a good fit and it’s definitely no accident the town’s priest is called Paul. We get a good glimpse into the very human or dark side of each of the characters and learn what atrocities they’d committed to land themselves in the surreal prison of one Barian. Although it took a fair amount of time for Barian to grow on me, I kept an open mind to the possibility of the epitome of evil being a little different to everyone.

In retrospect I find Phil Bolos is well aware of this as well and creates a unilateral antagonist for the sole purpose of shape shifting and morphing into each of the other character’s conceptual pondering of what evil is to them. Another example of subtle delivery; it is most effective and will lurk in our subconscious longer after the second reading. The recalling of each individual’s experience and how their actions, reactions or lack of action had caused them the ultimate fate is most intriguing. We can relate, essentially to most of the characters and it really tweaks a theme of significance unto the reader. Regardless of how trivial or mundane our decisions or activity may seem to us throughout the course of our daily lives, Bolos reminds us that around every turn there lie’s the opportunity to be tested and to do the right thing.

I’d definitely read more of Phil Bolos efforts. I think he has the tools to be an intense, highly gifted author. His talent for subliminal plot development is phenomenal. Although his descriptions, dialogue and exposition could use some fine tuning, I look forward to these fundamentals being mastered to truly deliver what lurks from beyond.