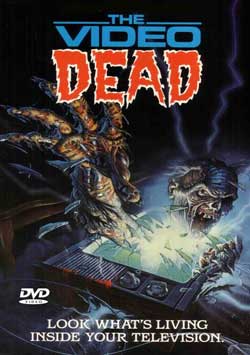 A family takes  delivery of a new TV set, unaware that it is the gateway by which killer zombies enter the world.

Best Line: “The TeeeeVeeee don’t kill nobody… it’s what comes OUT of the TV does the killin’.”

All the zombie lovers in the world need to see The Video Dead. It is a great 80s zombie incarnation filled with little gems of humor that all fans of the genre can find entertaining. This is so because of the innovative direction the zombie mythos is taken by the film’s creator, Robert Scott. 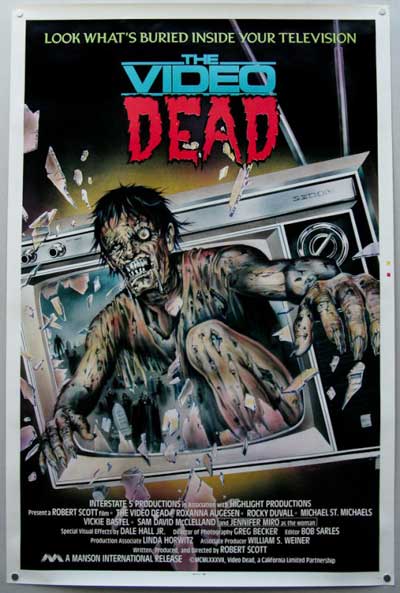 First, the delivery system of the undead isn’t a virus or a mutation – it’s a particularly beaten down television set. It will power itself on with no electricity to broadcast a continuous showing of “Zombie Blood Nightmare”. This, for the title alone, is a movie I greatly wish I could own. The other item broadcast is a crazy hot blonde who teases our doomed hero Jeff by appearing in his room for some hanky panky and zipping back into the television when things are getting real. Not relevant to the story at all, but I thought I’d throw it in, just like Scott did. 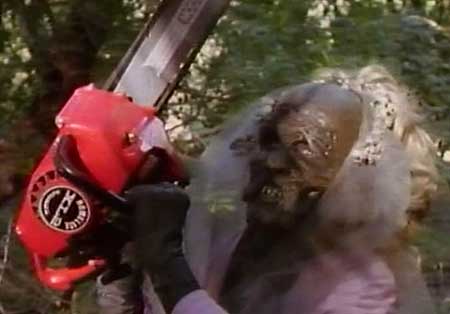 The next innovation is Scott’s choice to focus on actual zombie characterization. Sure we’ve seen a zombie in a wedding dress, but a zombie in a wedding dress, a wig, and wielding a chainsaw? We’ve seen the particularly overachieving zombie that persists regardless of injury, yes, but a zombie undeterred even with a clothes iron embedded in his skull? These two are even given specific listing in the credits. All five of them are the Bride, Ironhead, Jack, Jimmy D., and Half Creeper. Kick ass.

This characterization gives rise to some fun zombie psychology. Scott’s zombies have a consciousness and are self-aware. They are able to reason and work out problems even as they struggle to remember daily tasks they performed while living. This introduces envy for the living that manifests in the zombies’ need to kill. To that end, the zombies are driven by their victims’ fear, not their scent or even proximity. Later this evolves into a new way to deal with the undead predicament; a more “kill ‘em with kindness” take.

In addition, the zombies have a sense of humor. Pay attention to the kind of cute scene with the blender.

Finally, there are only two ways to kill the video dead: make them crazy enough to eat each other by enclosing them in a room from which there is no escape, OR attack them as you would attack any human in order to trick them into believing they are dead. But don’t bury the body – it must be reclaimed by Mother Nature. And if it is not reclaimed by nature, all bets are off. As one character, Joshua, puts it, “it’s not exactly a science.” 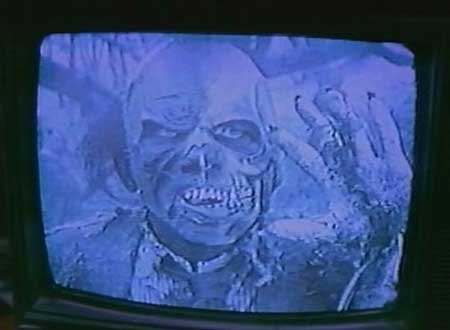 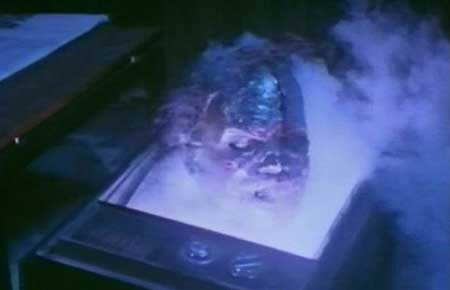 The editing is creative and interesting. At one point you’re sure that a zombie is approaching Jeff’s sister, Zoe, but Scott pulls some nifty misdirection and reveals something different. It has some cute moments similar to one when Jeff is preparing for the attack on the undead. As it turns out, there are three books needed for an ambush on zombies: “How to Kill”, “Understanding Guerilla Warfare Technique”, and “The Holy Bible”. The story is completely out there but still works somehow. This is accomplished by giving the television itself a type of personality. The makeup and prosthetics are low-budget but effective. Sawing a zombie in half with a chainsaw never looked fleshier and the live rats were a nice touch. Even the amateur actors are convincing at times. 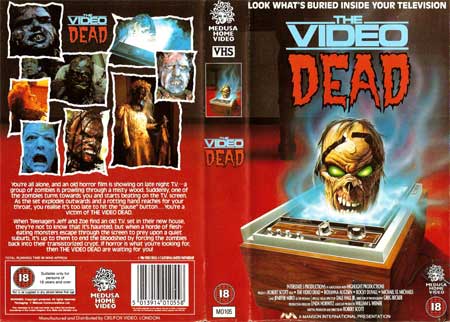 The movie was made in 1987, so if you are a jaded youth who doesn’t see merit in a movie unless it has CGI, you may not enjoy this film. If, on the other hand, you’re not, enjoy The Video Dead. 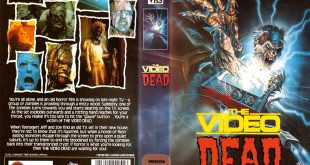 THE VIDEO DEAD – The Greatest Horror VHS cover in History?