Book Review: Off the Rails and Other Tales – Author Jason L. Liquori 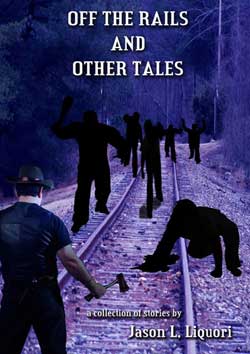 OFF THE RAILS AND OTHER TALES
By Jason L. Liquori

A collection of delightfully depraved bone chilling terror is summarized by title as follows:

BANKER’S HOURS: A band of retired bank robbers plot one last heist and tend not to lichen they get more than what they’d bargained for.

NIGHT CRAWL: Walter, Harry and Rachel roam the dense brush in search of refugee in a remote cabin from the unearthly creepy crawly beetle like creatures of epic proportion.

THE WHOLE OF TIME: A paradox of existence pits several people from different eras clambering for comprehension and sanity.

FRONT WINDOW: AN ALIEN VENGENACE TALE: A first person persona account of one man’s relentless pursuit of a body snatching alien with a shocking purpose.

OFF THE RAILS: A western zombie mish-mash that finds Sarah in the midst of a trapped train, derailed by a landslide, by fate or an unholy cause?

Liquori’s collection of short stories by and large is very enjoyable. I’ve become fond of short story collections in recent years. They’re often over looked and underrated. One cannot take for granted it takes a very special gift in order to draft an effective short story of any genre. Having fifty pages or less before eclipsing over into the novella category, an author must create believable characters we ideally relate to or at very least empathize with. A foreshadowing sense of circumstantial doom or rising tension must be unveiled at a rapid pace. If this is not challenging enough than the writer must also exploit a fear that transcends common enough to engage the constant reader from one page unto the next.

Jason Liquori has a well honed grasp of each of these traits and utilizes each well.

At first glace the presentation in non-electronic format is a little on the distracting side. The type setting is dreadfully off kilter and some of the art work although rustic falls short of bedazzling the reader. One may consider these points to be derogatory or of ill fate. Trust me the more you delve into Off The Rails, the more the rough around the edges type charm seems to grow on you.

Think of it in comparison to an independent B movie. We know it’s awful. Our friends, peers and associates criticize us for investing any entertainment hours into it whatsoever but it becomes your guilty pleasure all the same. If you want mindless, in your face, make no apologies cavalcades of thrills, chills and creepy spills than you need not look any further.

I find that all too often fictional aficionados and avid movie goers place too much value on the sophisticated production. I’m hard pressed to find why we always have to engage in philosophical debates about the subtext, themes and undertones of a story.

Every now and again I like my escape from the monotony of life to be well submerged into a debacle of gory, violent, evil horror. It’s cathartic. It’s a welcome distraction. Hell I’ll even go so far as to say it’s therapeutic.

Liquori is well aware of the points. He’s not out to win the next Pulitzer or pen the next HP Lovecraft or Bram Stoker. Off the Rails and Other Tales is just good old fashioned commercial fiction with a kick.

His descriptions are vivid yet not over indulgent. The character interactions are contemporary, current and translate well among every day society. Our protagonists are portrayed as likeable, endearing characters while the antagonists are subtle and allude to little of their diabolical ways. This is cleaver escalation of plot design indeed.

Each of the scenarios is fashioned in realistic splendor without force feeding a great deal of exposition that can distract from any descent read, especially short stories. Perhaps what is most admirable about this independent author is his keen sense of delivering a sound climax. Without giving any spoilers, his conclusions often have shades of sheer twist of fate that can clearly be celebrated with Alfred Hitchcock’s tradition.

Other influences of science fiction come shining through as noted in The Whole Of Time and Front Window that mix well into the genre stew rather than leaving a poor taste in your mouth. Liquori’s use of creatures from beyond mash well with horror theme and engages the reader deeper into their imaginary abyss.

A most recommended volume for perhaps the commuter train, camp-fire stories or perhaps just lounging around with a solid page turner on a rainy day.

A special limited autographed edition is also available and comes accompanied with a DVD. The disc contains Jason’s Hocus Focus Productions allowing a glimpse at his web series The Simplest Things, among others. The production quality is obscure, the content bizarre and oddly reminiscent of a high school videography assignment. Nonetheless its good, off kilter fun in spirit of a future cult classic following. Never shy on humor, once again it’s a welcome escape from the hum-drums of our ordinary lives.

Book Review: Off the Rails and Other Tales – Author Jason L. Liquori

Tags Jason L. Liquori Off the Rails and Other Tales