SYNOPSIS:
“Boat Captain Thorne Sherman and his black sidekick, Rook Griswold, arrive to deliver supplies to a remote and isolated island, inhabited by a scientist, his daughter and his aides. Sherman soon learns that the scientist and company have created out-of-control, flesh-eating, monstrous giant shrews. A hurricane hits and all the stranded humans become either meals for or meal-targets for the shrews.” (courtesy IMDB)

REVIEW:
As the fifties drew to a close so did the era of the giant radioactive beast. Spawned from the nuclear fears stemming from World War II, the movies saw dozens of animals super-sized due to one of the popular catch words of the time: Radiation! By decades end, just about every manner of giant beastie had been seen. Lizards, spiders, ants, grasshoppers, the list goes on. The major studios had lost the inclination to finance such projects and gradually re-focused their attention on new trends like nudies, bikies and Gothic horror. That is not to say that movies with ginogorous critters didn’t exist. It’s just that, more often than not, it was left to the little guy, the independent producer or film-making rookie to unleash such monsters. A group of people trapped on an island during a storm must contend with a bunch of whippets in wigs, in the anti-classic, Attack Of The Killer Shrews (1959)! 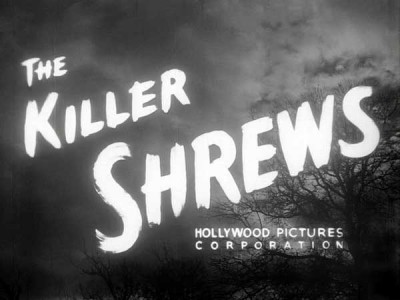 Also known as just The Killer Shrews, it was the brainchild of Texas millionaire Gordon McLendon. Born in Paris, Texas in 1921 he would go on to win a nationwide political-essay contest, attend Yale University where he studied Far Eastern languages, work for the campus radio station, and served as business manager for the Yale Literary Magazine, all before the U.S. got involved in World War Two. After the war he bought an interest in a radio station and built up a following for his live baseball game broadcasts. Having built up quite a name for himself as a pioneer in the radio field, McLendon now turned his attention to film – a regrettable decision for producer and audience alike. He and his family owned several drive-ins and theatres. Like many drive-in owners discovered, their outlets for screening films were considered the bottom of the barrel by the pretentious lot in Hollywood and many in tinseltown tried their darndest to keep their films out of the drive-in chains. This only led to the drive-in owners taking the next logical step, they financed their own films. In 1959 McLendon financed three films: The Killer Shrews (1959), The Giant Gila Monster (1959), and My Dog Buddy (1959), none of which are remembered as sterling examples of cinematic skill, if they’re remembered at all. 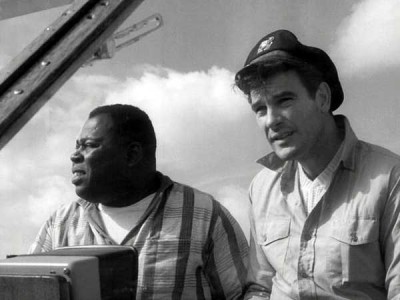 James Best, known far and wide as Sheriff Roscoe P. Coltrane on television’s original Dukes Of Hazzard, plays Thorne Sherman and captains his own ship. Sounds cool, but sadly it isn’t any bigger than the SS Minnow, and the only person he has to boss around is Rook. He’s a glorified gopher, delivering supplies out to Doctor Craigis on his island. Sherman is a man’s man, which by fifties terms means he drinks like a fish, smokes like a chimney, has an appreciative eye for the ladies and is ready for a fistfight on a moment’s notice, the kind of simplistic brute we are gradually evolving away from – a little too slowly if you ask me. 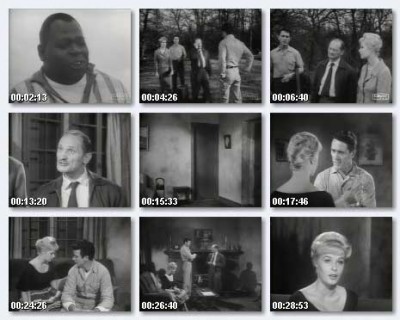 His honour Judge Henry Dupree plays Rook Griswold and looks like he could have played the title role in that live action Fat Albert (2004) movie. He’s Sherman’s sole crewman, although the two seem to share a real friendship rather than just bossy captain/abused crew dynamic. Poor Rook is the first person to bite it in The Killer Shrews, or more accurately, the first to get bitten. Repeatedly, as a matter of fact. In this way this film helped start the stereotype of the token black character becoming the first victim in horror films. You may think films like Night Of The Living Dead (1968) and Alien (1979) were breakthroughs for the token black character in American horror, but a pessimist might say they simply get more screen-time before being killed-off. 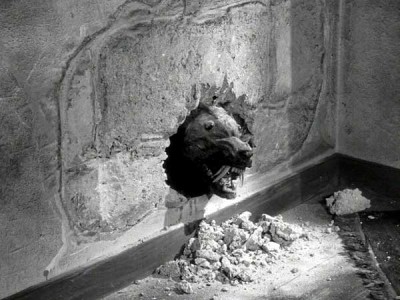 Baruch Lumet plays Doctor Marlowe Craigis. He may not seem like much, but he fathered one of Hollywood’s greatest producer/directors, Sidney Lumet, famous for Twelve Angry Men (1957), Fail-Safe (1964), The Pawnbroker (1964) and Dog Day Afternoon (1975). Speaking of dogs, he also directed the all-black musical The Wiz (1978) starring Diana Ross and Michael Jackson. Nobody’s perfect. Anyway, Craigis says he hails from Sweden, and has come to the island of The Killer Shrews to further his scientific work, but you and I both know it was to keep his sexy daughter out of the Swedish p*rn industry. Craigis wants to shrink people, or at least slow down our metabolisms so the Earth’s resources will last longer when overpopulation becomes a big problem. I think a bigger problem might be smarmy foreign scientists who screw around with Mother Nature. 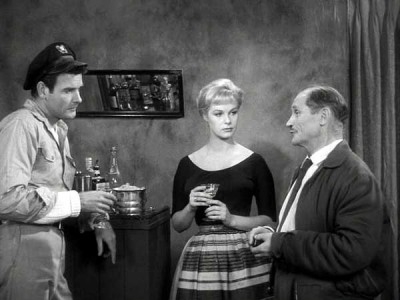 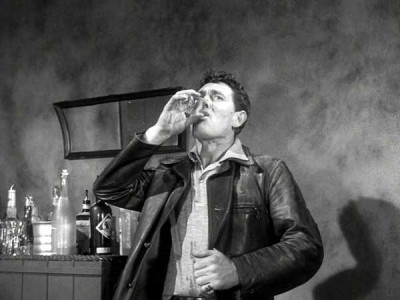 Ken Curtis, another famous redneck, plays Jerry Farrell, part of Doctor Craigis research team. Curtis was inducted into the Hall Of Great Western Performers in 1981 for his performance as Festus in almost three hundred episodes of Gunsmoke. Jerry’s vital role in the mission is whining, cowering, boozing it up and generally being a waste of skin. He despises Sherman from the start, probably because he recognises that Sherman is much more of a man than he ever will be. I wouldn’t get attached to Jerry if I were you. 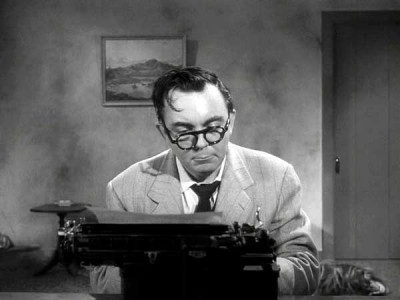 Played by Gordon McLendon, the Texas millionaire responsible for this mess, Doctor Radford Baines is another one of the scientists helping Doctor Craigis with his work. This guy is really devoted to his work. In fact, he can hardly think of anything else and walks around muttering things like “Hematoxic Syndrome.” His last moments on Earth are spent in devotion to science and furthering the understanding of mankind, instead of doing something really important like trying to get laid or run away. 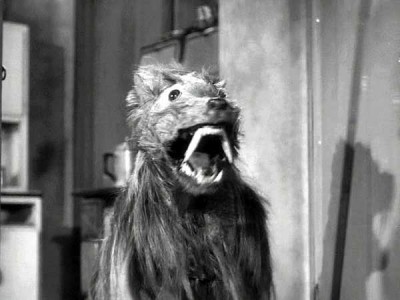 Unknown Alfredo DeSoto plays Mario. Despite the Italian name, Mario is apparently Mexican. He’s most likely a servant of some kind, though his main duty seems to be as a device to advance the plot. Whatever he does, it doesn’t involve too much physical labour, as Mario’s midsection is expanding faster than a balloon. He isn’t around much, just long enough to say things like “Si, senor”, “No, senor” and “Aaaahhhh!”. It also explains why the shrews ran out of food. Mario doesn’t look like he was missing any meals. 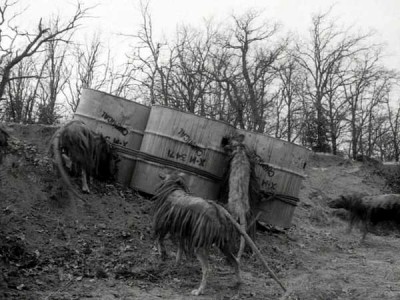 Attack Of The Killer Shrews gives real meaning to the phrase Low Budget. Filmed on a mere handful of sets and featuring scene after scene of people talking, often with their back to the camera, with little in the way of action, and one could easily dismiss this as pure manure. The fact that the giant shrews are played by dogs in drag when they’re not being represented by clumsy puppets, and one could not be blamed for turning up their nose at this movie. If there is a saving grace, it’s the short running time. So yes, there’s lots of boring talk, but there is also enough monster action to satisfy fans of such schlocky goodness. Besides, I shouldn’t have to explain how funny it is to watch somebody scream in terror at a Collie wearing carpet remnants, when the dog is rolling over on his back obviously expecting a belly rub!

How exactly do Killer Shrews assimilate poison into their systems, anyway? For instance, I love to drink Absinthe, and I do mean Absinthe, not that over-the-counter swill. I’ve consumed hundreds if not thousands of litres of it over the years, over three thousand litres just in the last fifteen years, but I still haven’t started frothing with green poison yet. If I can’t assimilate my own favourite beverage after drinking thousands of bottles, how can the shrews do so with poison after just one sampling of it? Anyway, please join me next week so I can poke you in the eye with another frightful excursion to the backside of Horror News, filmed in glorious 2-D black & white Regularscope for…Horror News! Toodles! 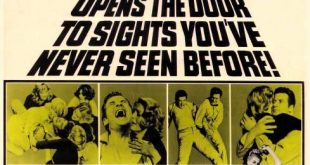