Film Review: Beyond the Black Rainbow (2010) 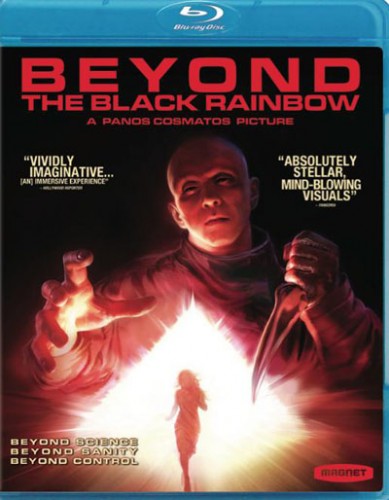 Despite being under heavy sedation, Elena tries to make her way out of Arboria, a secluded, quasi-futuristic commune.

Canadian science fiction, Beyond the Black Rainbow (2010), is a rather lethargic, hypnotic composition of a film. We open upon a psychedelic commercial in process for a commune named Arboria. As we are told, this institute is a scientific solution to inner peach and happiness constructed under the scientific research of Mercurio Arboria. The process involves a bit of mind-alerting drugs that are never fully explained in detail but tend to tap into the psyche offering a bit of extra sensory abilities.

Barry Nyle (Michael Rogers) is the melancholy seductive psychotic in charge who approaches his patients thru a glass window to check on their progress (we assume to prevent any psychological backfire from them). Actor Rogers at times reminded me of a Marilyn Manson without makeup…though I’m not sure if others made that similarity. Other times, I felt a slight crossover from the “Man Who Fell To Earth” era. Though even with both of those comparisons, who evolves into a odd character of sorts who feels more alien than human (though that actuality is never really acknowledged.

It’s pretty safe to say that not alot makes much sense in the interim here (or from here on in). We get plenty of glowing ambience lights thru corridors and rooms under the basis that our main subject Elena (Eva Allen), is being studied and cured (for that matter) from what she was originally placed in here for. 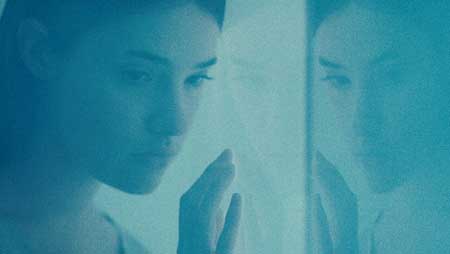 The film never really seems to hit that ah-ha moment while rather it seems content to stay in its enigmatic state of dreamlike settings and bizarre interludes of hallucinogenic segmentations. Dr. Barry Nyle who appears to be running the show also seems to be running a 1-man show with 1 patient. Though later segments reveal that the institute is much bigger than expected. Nyle who went thru a earlier transformation in the 60’s, one that involved a white room and a liquid-like rebirth also seems to be living in disguise. One that I never really fully got the gist of. (somewhat Cenobium perhaps??) 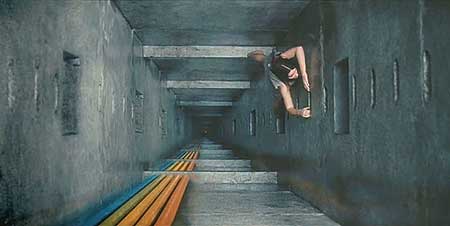 “Beyond the Black Rainbow” may be as science fictiony as it gets, but in that statement it also falls squarely into a pretentious realm that fully alludes any connection to its audience. While I believe that films should not spell everything out for you, it would probably have helped if the film made a little rational sense that we could build off of.

In retrospect, we get a girl who has been experimented on in an institute that has a weird pyramid-like object at its core. The experiments are connected to a mind control ability that might be better matched comparing it to someone from “Scanners” (a potential hint at evolution??). She does eventually wake from her comatose state enough to find her way out of what resemble a “Cell”-like structure. In that journey more weird elements also begin to unroll. One’s that question but don’t answer.

The film was directed by Panos Cosmatos who while offering a bit of visual excellence at times also seems to miss the “point” of a film by giving its audience something to hold onto. I couldn’t see this being a hit on the purchase circuit except by maybe the “get lost in the moments” crowds who like their content loose and ambiguous. The ambiguity here is not in the same sense of Kubrick or Lynch but in the pure sci-fi, the kinds that film students might enjoy discussion over into fleshing out its true meanings and intentions. For horror genre fans, you only get a slice big enough to make a slight connection, though I’m more comfortable in stating…….there’s nothing for you here….keep your eyes averted and dig up something more suitable like “Pandorum“. Maybe “Beyond the Black Rainbow” will succeed when it has a director commentary added to it to keep us informed of its suggestions. 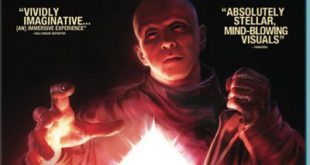 Dare You Venture ‘Beyond the Black Rainbow’ – Now on Blu ray