From indie veterans The Quiroz Bros. comes a new tale of horror: DELIVERANCE FROM EVIL. A young East Coast couple starting over move to San Francisco with their son. When they lose him in a tragic accident, they realize there’s an evil presence that doesn’t want them there. Forced to come to grips with the supernatural reality haunting them, they seek the help of a psychic to get rid of the evil spirit. Things take a turn for the worse when the angry presence refuses to leave their “haunted” house. Can they escape demonic possession, or will they join their son in eternal darkness?

The cast includes Angel Aviles (Robert Rodriguez’s Desperado, My Crazy Life), Jose Rosete (The Damned, Death Row), Molly Cellaschi (I Got Five On It Too), Raul Martinez (I Got Five On It, Hood of the Living Dead”), and guest cameo from Victor Miller (writer of the original Friday the 13th). 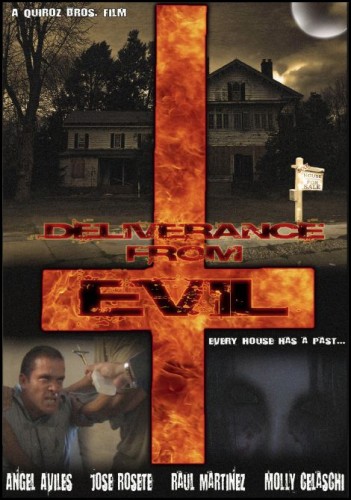