“Earth is united under militaristic organization called the Federation. Even in school students like Johnny Rico are thought about importance of serving to the Federation. On the surface atmosphere looks pretty relaxed, Johnny is dating beautiful Carmen, he has successful high school football career, loyal friends and rich parents. In the background Federation is in war with highly intelligent insectoid population that has colonized many worlds and are now trying to exterminate humans. Carmen decides to go to a school for a pilot in hope of commanding her own space ship one day and Johnny follows her not wanting to separate, but they eventually get separated in the line of duty when Johnny ends up in the Infantry and Carmen in the Fleet. When tragedy obliterates their home city of Buenos Aires, Johnny gets determined more than ever to put an end to the insectoid aggressor. Driven by hatred of the insectoids, and jealousy for Carmen’s new boyfriend, Johnny strives to become one of the best soldiers Federation has ever seen. But ‘bugs’ prove to be smarter and more resilient than he originally thought.” (courtesy IMDB)

Best-selling science fiction author Robert Heinlein published his novel Starship Troopers in 1959, about a star-faring infantryman of the future caught up in a life-or-death struggle with despicable insectoid aliens. The novel is a harsh, didactic tirade which proved quite popular despite its evident designs upon the reader. It was full of ingenious details and cleverly insinuated revelations. For instance, it’s revealed towards the end of the novel that the hero, Juan Rico, is actually black or, more specifically, a dark-skinned Filipino man, a startling fact for its day. In retrospect, the novel can be seen to have initiated a whole school of militaristic American science fiction, inspiring many other authors such as David Duncan and Jerry Pournelle. The novel also represented the beginning of Heinlein’s hectoring right-wing phase (he was one of the few science fiction authors to support America’s presence in Vietnam) as well as the beginning of his decline as a novelist of the first rank.

Fast forward three decades. Hollywood producer Jon Davison was approached with a project entitled Outpost Seven written by Edward Neumeier, who had previously co-written Davison’s eighties action hit Robocop (1987). Set in the far future, and concerning soldiers stranded on a remote planet whose indigenous population is composed of large hostile insects, Outpost Seven had been conceived as a World War Two movie set in outer space. The producer encouraged Neumeier to develop his initial concept into a feature-length treatment, which was subsequently submitted to TriStar Pictures, who promptly turned it down. It was at this point that Heinlein’s novel Starship Troopers entered the picture. Mr. Davison said, “Starship Troopers had giant bugs in it, and we wanted those bugs. So we enquired about optioning Heinlein’s novel and discovered that it was still available. Ed and I immediately went back to TriStar and said we want to make Starship Troopers!” Needless to say, the studio became more amenable. 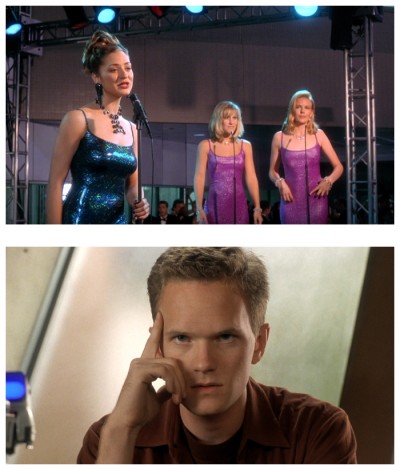 Essentially, Mr. Davison has taken an original script that no-one would read, slapped a known title on it, and suddenly everyone’s interested. This happens all too often in Hollywood today – Wild Wild West (1999), Planet Of The Apes (2001), I Spy (2002), I Robot (2004) and War Of The Worlds (2005) are just five examples that immediately come to mind – but Mr. Davison is most definitely a product of Hollywoodland, starting his career with the centre of our universe, Roger Corman, producing Ron Howard’s Grand Theft Auto (1977) as well as Joe Dante’s Hollywood Boulevard (1976) and Piranha (1978). Feeling that he’d learned enough from my old friend Roger, Jon went on to produce Flying High! aka Airplane! (1980), Twilight Zone The Movie (1983), Top Secret! (1984) and the aforementioned Robocop and Robocop II (1990).

It was not the novel’s fascist themes that made it an exciting movie prospect, as much as its giant insects. Convinced that, even with the bugs, no viable cinematic treatment could be realised without an A-list director at the helm. Davison approached Robocop director Paul Verhoeven regarding the project. Verhoeven was initially wary: “My first reaction was, giant bugs? How silly. Ed and Jon insisted that this film could be something special. But at the beginning, I was somewhat skeptical. I’ve always wanted to do a movie about the Second World War, because I think it is an extremely interesting period. And since I’d experienced the Nazi occupation of my homeland when I was a boy, the concept also had personal connections. Starship Troopers (1997) seemed to be an opportunity to explore that period in an unusual way, and to translate my feelings about it into a science fiction framework.”

The end result is perhaps one of the most underrated and misinterpreted movies of all-time. Far from being a glorification of war, the film is highly critical and satirical of the media trappings that seduce us. Four teenagers graduate from high school and immediately sign-up for military service, which is the only way one can become a citizen in this dystopian future. While on basic training, insectoid aliens from the planet Klendathu attack Earth and wipe-out several million people. War is declared and the four friends find themselves in different arenas of the same conflict. It’s easy to get sucked into viewing the film simply as a gung-ho Hollywood blockbuster, with a US$100 million budget, big explosions, giant spaceships and thousands of Klendathu bugs, but Starship Troopers is much more satirical in its evocation of World War Two propaganda, particularly the kinds of propaganda films of the Third Reich that director Verhoeven grew up watching in occupied Holland. For Verhoeven, the kind of military hysteria the story was evoking was as much a reflection on the Third Reich as it was a warning about contemporary American politics and our media-saturated culture. When Carl (Neil Patrick Harris) emerges from military intelligence wearing a black Gestapo-like uniform, Verhoeven’s little joke putting Doogie Howser MD into a Nazi outfit was lost on most of the audience, who seemed to approach the film only on its most superficial level. 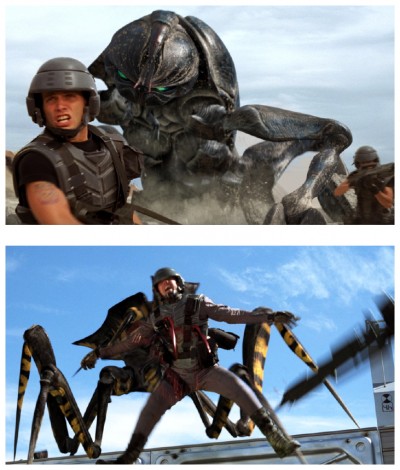 In the months leading up to the release of Starship Troopers, TriStar Pictures launched a massive advertising and marketing blitz, however the picture’s performance at the box-office was less than spectacular. Audiences were enthusiastic about the movie’s action scenes and Phil Tippett‘s incredible visual effects, but there was lukewarm response to the satirical treatment of Heinlein’s novel. Many critics were put-off by Verhoeven’s unflinching graphic portrayal of futuristic combat, or were disdainful of the film’s youthful cast for being bland and wooden: Casper Van Dien as Johnny Rico, the film’s central hero; Denise Richards as Carmen Ibanez, Johnny’s high school love interest who breaks his heart for a flyboy; and Dina Meyer as Dizzy Flores, Johnny’s best female friend who’s carried a torch for the hero since they were in high school together. Admittedly, these are paper-thin caricatures but, for Verhoeven, that’s partially the point. These characters are intentionally cartoon-like, not meant to represent real human beings at all. The film has all the sensibility of playing with your Star Trek dolls being attacked by giant bugs. To have humanised these characters would have been to detract from the sheer spectacle-for-spectacle’s sake of the production and, without that distance to the reality of the film, we run the risk of missing the point of the satire – just as many critics did. On that rather sad note, I’ll wrap up this article, but not before profusely thanking Cinefex Magazine #73 (March 1998) for assisting my research. Please be sure to join me next week when I have the opportunity to throw you another bone of contention and harrow you to the marrow with another blood-curdling excursion through the dank dells of Horrorwoodland for…Horror News! Toodles!