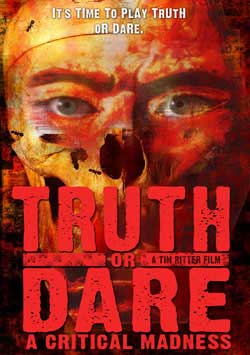 Mike is having a bad time, first he walked in on his wife cheating on him with one of her coworkers. As if dealing with the stress of his marriage being over wasn’t enough now he is starting to see people everywhere, people who want to play a dangerous version of truth or dare, so dangerous that limbs can be removed….Mike wants to know if you want to play?

Only the 1980’s could have brought this one out, Tim Ritter’s Truth or Dare just reeks of the era and let me tell you that isn’t a bad thing at all.

Truth or Dare starts by showing loving husband Mike coming home only to find his wife Sharon is in the arms of her coworker named Jerry. Mike of course spasses out and talks briefly to Sharon before he leaves, Sharon informs him that it is officially over and it is time for him to move on. I am a big fan of the next few sequences in which Mike drives to a cliff and walks down onto a beach to have some time to think about things. During this segment director Tim Ritter lets you into Mikes head; he starts to relive all of the events that led up to what he walked in on. Though the sequence comes across as confusing when it first starts once the viewer figures out what is going on you realize how well it was captured.
Mike leaves the beach and starts to drive when he suddenly sees a young girl hitchhiking, he stops to pick the girl up and the two go on their way.

Eventually the two make their way to a campground and start to purchase supplies so that they can set up for the night. While sitting around the fire and talking the two decide to play a game of truth or dare. The game starts out as harmless until Mike jokingly dares the young girl to take out her eye with a corkscrew. The girl rams the corkscrew into her eyeball and pulls it out immediately putting it into the shocked Mike’s hand. The woman then dares Mike to cut off his finger, which he does. The sequence keeps going and isn’t limited to Mike ripping out his own tongue, cutting open his chest and being dared to kill his now ex wife; oh and it is also revealed that the girl was never really even there in the first place, Mike instead imagined her.

Mike of course becomes institutionalized after a park ranger finds him bleeding by the campfire. This is an example of several of the small characters who make this movie; the park ranger cusses Mike out for having a fire after the permitted time and then freaks out when he sees Mike. Mike isn’t institutionalized for long though since the institution apparently is dealing with over population. Mikes doctor sees him fit for rerelease and sets him free. My one flaw with Truth or Dare is how things are forgotten, when we see Mike again he is talking (they explain how they were able to teach him to talk again without pieces of his tongue), yet they don’t explain how he got his finger back….this isn’t the first time the film does this but really once it gets going its so fun you forget about it.

The now free Mike quickly makes his way to a payphone and finds out Sharon and Jerry’s address. It doesn’t take long at all (literally he just suddenly is at the house) to start stalking around his ex wives house. Jerry is in his “shop” when the radio suddenly does a broadcast talking about Mike’s release, when Jerry turns he sees Mike who instantly kills him. Mike then stalks out and attempts to kill Sharon but she is quicker with a knife and tears open Mike’s stomach. In all of the confusion after the attack Mike stumbles out of the house and is eventually picked up bleeding on the street.
Mike once again is institutionalized and this leads to possibly one of the best sequences in the film. Mike sits by himself in a padded room spinning in a wheel chair when he suddenly sees two new people in the room with him and of course the group starts to play truth or dare; Mike has conviently brought a survival knife into the room with him….again I told you don’t ask just go with it. While Mike’s doctors are discussing his condition where he sees other people and self abuse is socially acceptable we are treated to scenes of people cutting off their arms and legs, a head is blown up by a grenade and Mike begins to slice his own face off. When we see Mike again he has now fashioned a mask for himself out of copper, yet when he breathes it moves with him.

It doesn’t take long for Mike to get out yet again and this time he means business. For starters Mike suddenly has an assault rifle that he uses on several people, he drives directly into a woman who is walking her baby in a stroller (in a more tasteless segment) and he actually does a “drive by” chainsaw attack that really has to be seen to believed all leading up to the climax of the film.

I honestly didn’t know what to think about Truth or Dare during my initial viewing of the film, it wasn’t until one of the many scenes of violence that I realized that I was having fun with the movie; for one I quit wondering how he got his finger back and by the time he is shown with the assault rifle I just let it go and had a lot of fun watching it.
The gore sequences are here but this is a low budget shocker from 1986 so most of them don’t look that great. The lone exception of this is the above mentioned truth or dare game with the survival knife, the gore is laid on thick in this sequence and it really is a twisted vision. By the climax of the film Mike has started to kill so many people that I really am not going to list all of the deaths, as some of them will cause your jaw to hit the floor.

Truth or Dare is great for those who remember the glory days of 80’s low budget horror and I’m sure it will bring back many memories for those who remember the glorious days of VHS rental. The new school is going to like this one simply for its senseless violence, once Mike goes on his rampage it really does get senseless so be warned. Truth or Dare is definitely worth a look though by all fans of the horror genre. 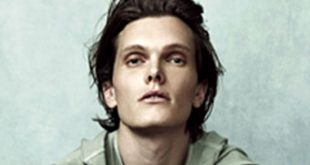