A woman who lives alone is paranoid that there may be someone else in her house.

A woman comes home and suspects that her things have been moved. Though it’s shortly after that we flash forward to a session in process where a Psychiatrist  is telling her that its just a psychological issue. This woman dreams again that another stranger has entered her apartment and slit her throat. Though within this 4 minute short we circle around to find that these visions are not of reality and a product of her own paranoia.

Andrew Newall directs this short film that takes on a look at personal issues and the way the mind wanders for those who live alone. Because of the short time frame, we never really get into any of the details of what, why and how. Because of this, I find reviewing short films to be harder sometimes due to “lack of” content. However, there are some shorts which say enough in a few minutes to deliver the point. To be honest, I really couldn’t find the point here. Maybe it’s a short thriller about alone syndrome or maybe it’s a short that takes on the psychological issues of others. Maybe its just to introduce a moment of dread within the context of a small premise. In any case, I can’t really call it good or bad, just incomplete. I personally love clinchers that end shorts on a twist. Maybe that’s what this piece needs. 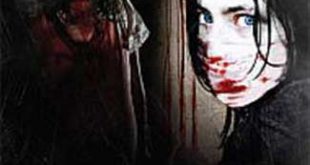