Book Review: Dead Inside: Do Not Enter – Author Lost Zombies 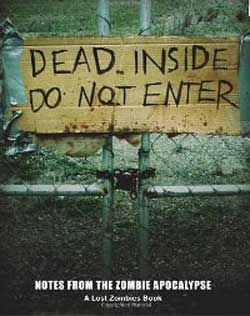 Dead Inside: Do Not Enter: Notes from the Zombie Apocalypse

While the market seems almost flooded with books sporting zombies, talking about zombies, advising on zombies and comparing notes on zombies, it’s always refreshing to see a different form of product arrive. “Dead Inside: Do Not Enter” takes a welcome basic approach by collecting a smattering amount of contributed found items. Collage, discarded, distressed and thrown away, these pages each feature a simple note or letter that details the zombie apocalypse upon readers. The book tries to follow in a sequence of sorts but as we are told, the pieces of paper were retrieved from a found back pack. The back pack containing a collective of these trash items.

The book is fun to look at, easily read and with the number of different materials and handwriting styles, it makes for a pretty interesting coffee table book. Unlike others in its category, “Dead Inside” never really focuses on the zombies themselves, but rather a view point of the people around them who describe the situation, the turning, the epidemic, the survival tactics and a general viewpoint change that shows humanity getting wiped away in favor of individual perseverance. We feel the morals slowly slipping allowing our basic instincts to take over in the interest of food, water, shelter and vengeance. At one point we learn of a haven, of a children’s center. Over notes, we see this form of sanctuary slowly crumbling and being overtaken by those who have been bitten.

The book begins with a summary of timelines, that help to set the pace and reasons behind the notes to follow. From teens, to children to adults, there is a paranoia, fear and uprising that transforms from scrap to scrap. The book is seemingly driven by the calls from the “Lost Zombies” project, but also is almost in line with the “Walking Dead” story line being played now on TV.

The book itself is compiled by a online project called “Lost zombies”. As the closer notes indicate, these materials were sent in from a request for different examples of end of days notes. This variety really helps the showcase of notes to present a eclectic collective of views, and scribblings. The book never attempts to become a novel and instead relies on the images of found paper to lay out the story. “Lost Zombies” the site, is described as “Lost Zombies is a San Francisco Bay Area-based social network for zombie fans that logs a quarter-million page views monthly.”

The book comes in at full color at 160 pages. Each page contains a found paper image setting the mood from front to back.

Tags Dead Inside: Do Not Enter Lost zombies