The Insomniac 10/22/2011 From the Nightshift | New York Horror, Interviews

What made you decide to write Satan Camp?

Like all good stories about the origins of things, this starts at a bar. I was enjoying some whiskey with actor Kent Meister and director Scott Chinn, talking about this insane script I had just completed called Mosquito. That script involves bloody hordes of insects, large scale epic apocalyptic battles, body swapping (complete with totally bizarre sexual encounters revolving around said body swapping) and all sorts of insanity. In other words, it is highly complicated and ambitious. I love it and hope to do it some day, but over the course of our conversation about Mosquito we just sort of starting riffing on other ideas, things that might be just as insane and fun but also much more doable. The story for Satan Camp just sort of popped into my head. Actually I think I called it “Camp Satan” at first, but then Scott wisely inverted those words. So the short answer is, and I imagine this is probably a common answer for writers – whiskey plus bullsh*tting with friends. 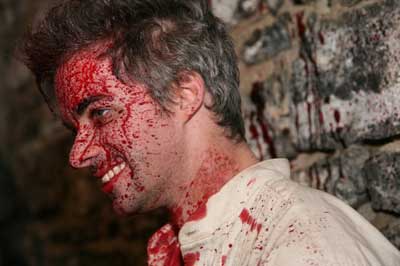 Why a horror comedy? Why not a straight comedy or a straight horror movie?

On a personal level, that’s just what I tend to enjoy. Those two genres in particular are natural allies – hell, it is common for people to laugh when they get scared. Also, I’m actually a huge fan of genre mash-ups in general. I love genre pure things as well, but as a writer there are interesting experiments to perform and avenues to explore when you mix and match that you just can’t do with something that is strictly one thing. In general, the plays and movies that tend to stick with me the longest are the ones which get to me from the greatest amount of angles. I want to guffaw. I want something to seize me by the throat. I want something to blow my mind.

What you would say are your influences? Or favorite films?

Oh man, there are lots of movies that I absolutely love. Obviously Evil Dead 2 is pretty big influence on my work, and I enjoy horror / comedy mash-ups Ilike Shaun of The Dead, Dead & Breakfast, Murder Party, etc. But my favorite films of all time also include things like Mephisto, Withnail & I, Being There, Mysterious Skin, and Inland Empire. If something is done brilliantly – no matter the genre – I’m going to love it. On the flip side of the coin, I also enjoy watching movies that fail spectacularly, especially if they’re trying to do something compelling.

Well, the biggest difference between Charred Oak Films and other production companies is that we don’t have any money. Yet.
But seriously, we’re a group of four people working completely independently. Independent in the actual dictionary definition of the word, not in the movie business sense of “anyone who isn’t making $100 million studio epics.” It’s very challenging but we’re hopeful that we can meet the right people, and make great work: truly well-written, with really good production values, using the latest filmmaking technologies and the unprecedented access independent operators like us now have to those technologies.

Also we aren’t just producers. We’re writers, directors, designers, and actors, so we’re really trying to create our vision. There’s obviously a level of passion and obsession at play, which is a requirement to do great stuff, but it also means we’re fully invested in making the business side of things work as best they can. 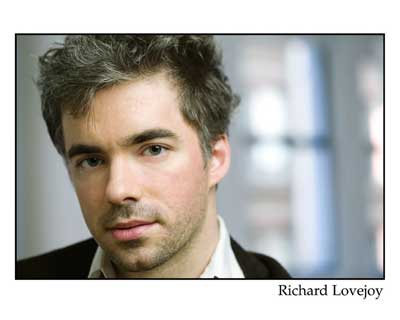 What other projects do you have in development at Charred Oak Films?

Oh man, we’ve got a LONG list of projects. Seriously. I think it’s a very impressive list as well. There’s a lot we want to do, and for us it all starts with Satan Camp. To get that going we’re doing a short that is in a similar style, called Always A Bridesmaid. Info about that can be found at www.kickstarter.com/projects/charredoak/always-a-bridesmaid-produce-a-bloody-good-horror. After that we have Mosquito – which I talked about earlier – also ready to go. There are about twenty or so features or television pilots that we have in early stages of development, including things like Lame Ducks which is about two former presidents battling mutants, a quirky dark comedy called The Widowers, and a horror / western mash-up that is probably going to blow more than a few minds. Charred Oak Film also does branded content, which is explained on our web page www.charredoakfilms.com. We’re shooting something The Lesser Knights Of The Roundtable which is a puppet television program about life in Camelot after King Arthur and the “A” team of famous knights head out to find the holy grail, leaving the “B” team of lesser knights behind to run the kingdom. Of course their all reprehensible mead besotted loafs. It should be a blast. We’re also developing a cooking show, strangely enough, called Shit Faced and Cooking.

What other films, web content and theatre have you been involved with?

Most recently, film wise, I was in Rising Up: The Story Of the Zombie Rights Movement which won some awards in the Boston International Film Festival. Also, I worked with Red Scream Films on their remake of the classic Nosferatu. Charred Oak films produced a short I wrote and got to act in called The Scientists. Beyond that I have web series called Four if By Space (www.fourifbyspace.net) and I wrote a play called Adventure Quest which was essentially a play based on 1980’s Sierra style computer adventure games (such as King’s Quest.) I just performed in a musical about Charles Manson called Willy Nilly and I generally keep myself extremely busy. I’m bad at not working on something. Vacations are not my forte.

If our readers want to be able to follow progress of Charred Oak Films where can they find more information?

The best way to keep abreast of our progress is to follow us on twitter. Our screen name is charredoakfilms. The website www.charredoakfilms.com will also be regularly updated and is a great way to learn more about our company.

Thank you Richard for your time and we look forward to hearing more about Satan Camp and Charred Oak Films in the future.